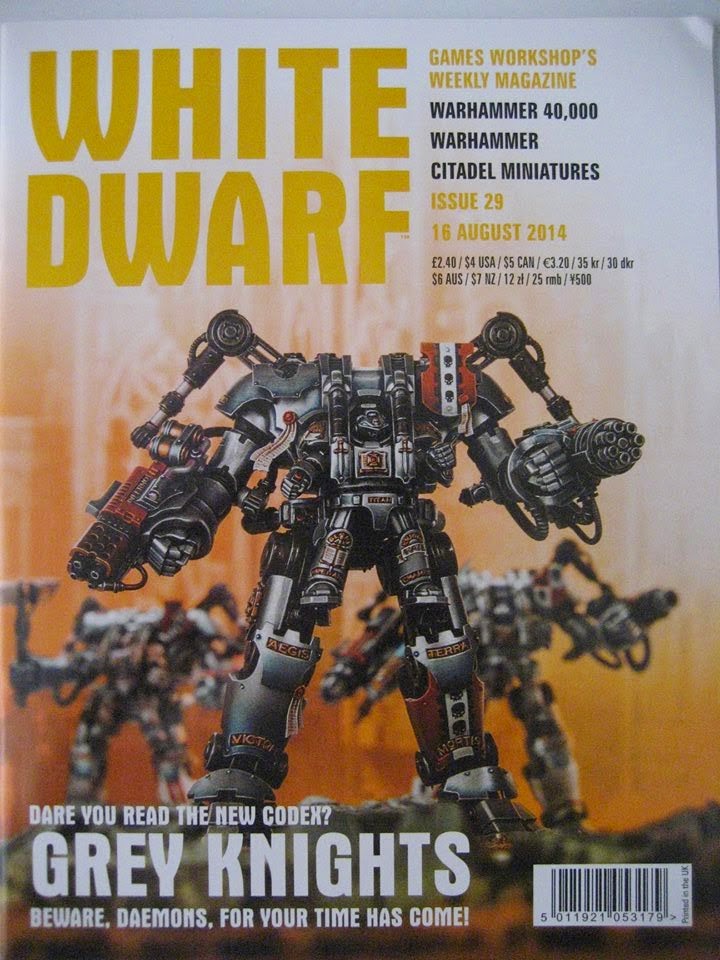 It looks like the Grey Knights will be getting a new codex based on this leaked photo of next week's White Dwarf magazine.  I'm not optimistic that they will be getting any new models based on the fact that there are a trio of Dreadknights on the cover.  I'd have to go back and look, but I'm pretty sure every time there has been a new model release, the new model has been on the cover.

The general rumor mill consensus is that this codex release is intended to bring Grey Knights into line with the rest of the 7th edition rules changes.  However, there are a couple of things that might happen that I can see GW catching flak for.

1. There is a strong possibility that the Inquisitorial elements will be removed from the codex.  There is already a Codex: Inquisition, so there is really no need for these models to be in the Grey Knights book.  This makes sense and I approve of the decision, but unless the units are replaced with something else, the book is going to take a big nerf...  and I'm talking in terms of value for the dollar.

2. Any units entries without models are likely to be removed.  This includes Mordrak and his Ghost Knights, Justicar Thawn and Inquisitor Valeria.  I might be missing others.

3. The Assassins will likely be removed and redone in a small Codex: Assassins release similar to the Legion of the Damned Release.  This is my theory, but I'm imagining a "Officio Assassinorum Detachment" consisting of 1 Assassin of any variety.  As they are unique, you could potentially just add all 4 assassins to any army.  This would be amazing.

You'll note that nothing is rumored to be added.  I can see maybe getting some of the units that are in the regular Space Marines codex, but this isn't really anything new.  You can do this now with allies.

If the above things are true and units are being stripped out without replacement, I think GW is going to have a hard sell charging 50 USD for a hardback codex.  They'll do it, but it's going to feel like a slap in the face.  They really need to work out a better method for providing these rules.  You can't just take away.

How hard is it to come up with new Grey Knights appropriate units.  Here are two off the top of my head.

1. Grey Knights Scouts - Up armored Scouts (maybe 4+/6++) with the option for the Scout Justicar to take a Nemesis weapon.  This would be stupid easy to do.  Fluff reason - sometimes you need to be sneaky so you leave your Termie armor at home.  Or just say that these are GKs who have been through decades of training and typically only defend Titan unless the need is great.