The Conquest of Hellion V

The local GW stores have been running a multi store, month long 40k campaign called the Conquest of Hellion V.  Essentially, you make a 10k point army list and then play games at 1750 points each.  Any unit that is wiped out is removed from your master army list and you can longer use it to build the smaller forces.  It's a lot of fun.  Every time you pick up a new unit in the store during the campaign, you get to pull cards from a deck that give the unit special abilities.  I picked up a unit of Fire Warriors to act as an honor guard for an Ethereal.  I got +1 BS and the Deep Strike special rule.  These Fire Warriors are now BS 5 and can hit the board wherever they're needed!  Tau super commandos!  I'm going to have to mod them up somehow to denote their elite status.

I've been giving some thought to how I want to implement the Armies on Parade board I'm working on.  I'm on the fence as to whether I should use my old Tau army or paint up a new one.  The Tau army would save me a ton of time, but isn't painted as well as it would be if I painted it fresh.  I'll probably pull out the army and take some pictures to put up later today or tomorrow.

In the meantime, I've picked up a 2"x2" plywood board to use as a base.  I also picked up some various PVC plumbing pipe pieces with nice round bits that I think would look good as Tau terrain additions.  I need to get some pink foam for the terrain.  I went to Lowes, but they only had a type of green insulation foam.  I don't know if the characteristics are the same or not, so I'm gonna go to Home Depot tomorrow and get some of the pink stuff.

My buddy is a pro at making terrain, so I'm gonna try and conscript him for my efforts.

I've finally decided on the theme for my Armies on Parade board.  For those of you who don't know, it's a contest being run by Games Workshop.  You basically put at least an HQ and two Units on a 2'x2' display and compete for best looking overall.  I'm going to be doing an Angkor like overgrown temple.  I've been scouting local stores for pieces and parts and I think I'm gonna be able to pull this off.  I've never made a piece of terrain bigger than about 12cm around, so this is gonna be an undertaking!

I'll post pics once I have some progress done.

Also, the Imperial Fists Tactical Squad is almost done and ready for unveiling.  I just need to finish the bases.

I finished assembling the tactical squad minus the weapons that cover up the chests.  I prefer to glue the guns on afterwards to make them easier to paint.  Here are updated pics of the rhino and the tactical squad. 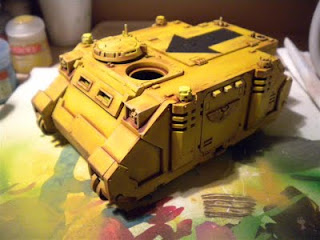 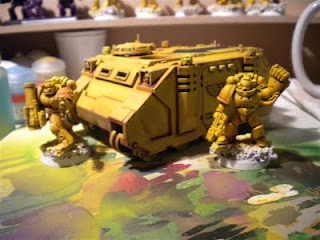 The lighting on these next two pics sucks big time.  I'm gonna try and put together some sort of light box over the weekend.  The marines almost look like I'm painting them the same color as my paint station.  As you can see in the pic above, the marines are more of a yellow than an orange. 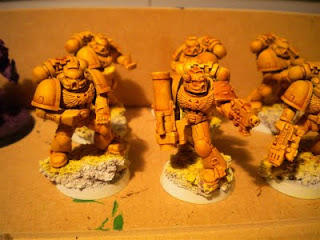 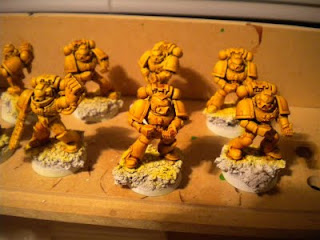 I did some more work today on the first Imperial Fists Tactical Squad.  They are completely assembled.  I gave the Sarge a Plasma Pistol and a Power Fist (seemed appropriate given the Chapter).  One marine has a missile launcher.  I modeled him with the missile launcher kind of hanging on his shoulder and a bolt pistol in his off hand.  I did this because I always forget they all have bolt pistols during assaults!  The other weapon will either be a flamer or a meltagun.  I haven't decided yet.  None of the standard troops have bolters (or flamer/meltagun) yet so I can paint the chest eagles more easily.

More pics tomorrow after I prime the models.  The weather sucked today and I don't feel like priming with my airbrush today.

Just thought I'd put up some Work In Progress photos of my soon to be Imperial Fists.  First up is the Rhino I mentioned.  I haven't done any of the highlighting yet, but the basecoat and the tactical arrow are both done. 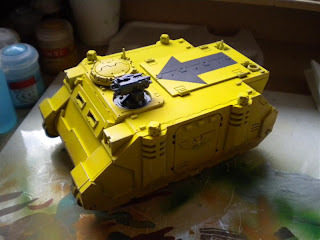 I used an airbrush to get the tactical arrow to have nice crisp lines.  It was my first try at doing it with an airbrush, and I feel it was pretty successful.  I still need to highlight it and clean up the edges a little, but I think this sort of detail adds to the tank. 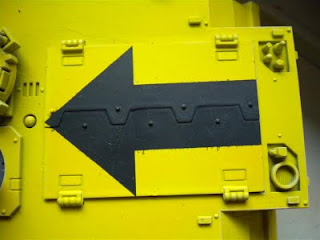 Next up are the beginnings of the first Tactical Squad.  I bought some IKEA cork trivets (heat pads) to pull apart and use for basing material.  The 3 pack was only $3.  Cheap stuff if you have an IKEA close by.  Here is what they look like with enough cork pulled out to base 10 guys to give you an idea of how much cork it is. 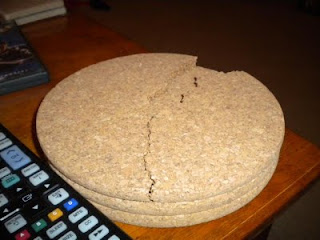 Here are the legs on the bases.  It's taking me awhile as I had to pin into the legs, through the cork and into the base on all the models.  Otherwise, the cork can come apart.  This pinning takes time, but makes all the difference in the long run. 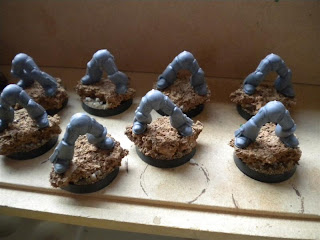 I'll post more pictures as I get more work done.  My plan is to have the troops assembled and base coated by the end of the week.

Forget the Lamenters... Sons of Dorn!!!

After reading the first part of Ben Counter's Phalanx, I've decided to go with an Imperial Fists army.  This allows me to paint the yellow army that I want to paint, but also allows me to use any of the off shoot chapters.  In reading all of the fluff, it always strikes me that any chapter based on the old Imperial Fists Legion seems a little more focused on their connection to their Primarch and to the other chapters.  For instance, you never really read about the various Dark Angels off shoots coming together to honor The Lion.  It might happen, but you never read about it.  Reading about how all these different Imperial Fists chapters come together to defend Rogal Dorn's honor and testify against a fallen chapter (The Soul Drinkers) is kind of cool.

Also...  I painted a Rhino Golden Yellow.  Lamenters are more of a mustard color.  I don't want to change things.  I'm that lazy!

I've just finished reading the serialized chapters of Phalanx through issue 6 of Hammer & Bolter. Spectacular stuff. I'm a big fan of the fluff and I can say this is shaping up to be one of the best space marine stories I've read thus far. Check it out!!!

I started reading the short stories in the Black Library's Hammer & Bolter E-zine. I picked them up originally because I wanted to read the next book in Ben Counter's Soul Drinkers series. It's called Phalanx and is being serialized in Hammer & Bolter with two chapters in the first issue and one chapter thereafter. I don't want to ruin the story for anyone, but if you're a Soul Drinkers fan, it is well worth it to buy these. They're only about $4 US each and come with a number of extra stories - although I'm really only interested in the Soul Drinkers ones! There was a great Deathwatch story called Exhumed featuring a Lamenters Furioso Dreadnought... pretty cool if you're a Lamenters fan. I'm definitely going to paint a Lamenters Furioso named Chyron at this point!
Check it out. I've been reading them on my Nook. E-Readers are awesome. Buy one.
The Black Library - Hammer & Bolter

I've finally decided on which Space Marine Chapter to work on next.  I've been a fan of the Blood Angels codex since it came out, but I'm not really a fan of the Blood Angels themselves.  Additionally, I've just recently acquired an airbrush, so my options for basecoating models have recently expanded.  I've decided to do a small force of Lamenters.  They have a really cool back story and look absolutely stunning on the table.

This morning I basecoated an assembled rhino with ColorPlace Flat White Primer.  It sells for 96 cents a can at your local Wal-Mart and works like a champ.  I find pretty much any white primer will work so long as you make short bursts from about 10 inches away.  Today wasn't humid, so no issues there.  I sprayed the model fully from above, but not so much from below.  Once finished, the model was fully white wherever the light would hit and a little darker from below where the shadows would be.  I guess you would call this a basic Zenithal highlighting basecoat.  Afterwards I used the airbrush to spray on a coat of GW Golden Yellow.  It came out pretty well.  A quick drybrush over the entire model of GW Skull White provides all the highlights I'm likely to put on a tank.  I did do some masking and put a black tactical arrow on the top hatch.  I'll post some pictures later when I get a little more of the detail work done.

Hell Cruiser Arcturus
This is clearly a Grey Knights Dreadknight replacment. I like the idea of making it look like a scaled up marine armor. To be perfectly honest, I'm not a big fan of the "baby carrier" style of the official Dreadknight.
A friend said he thought this model was too "busy", but I think it has a lot to do with the paint job. If you put thay much non-metallic metallics on one model and paint it predominantly gold, it's gonna look busy.

Welcome to Kris Wall Minis!  You'll be able to see samples of my personal painting projects as well as commissions and links to eBay auctions.  Feel free to contact me with any questions or comments.