The grey on one headlight is done along with the Tyranid carapace.  More to come!

I also finished all the red and grey base coat work.

I'm in the process of putting together a small Savage Ork 40k allied force.  I'm trying to use the various Savage Ork kits from the fantasy line.

I'm using an Arachnorok to count as a Trukk for my Boyz.  This is still very work in progress, and I will be adding the wooden framework to give my Orks somewhere to sit. 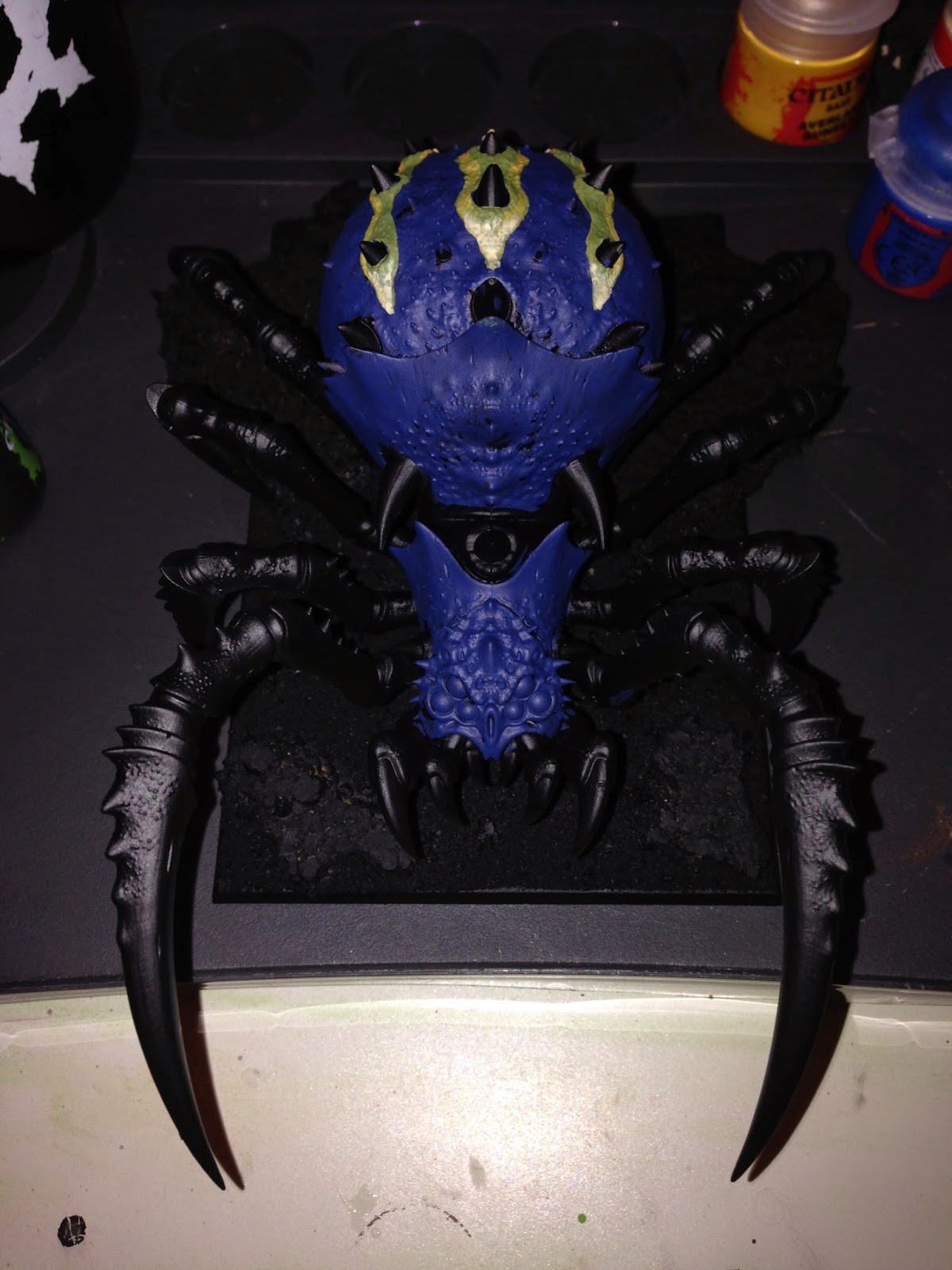 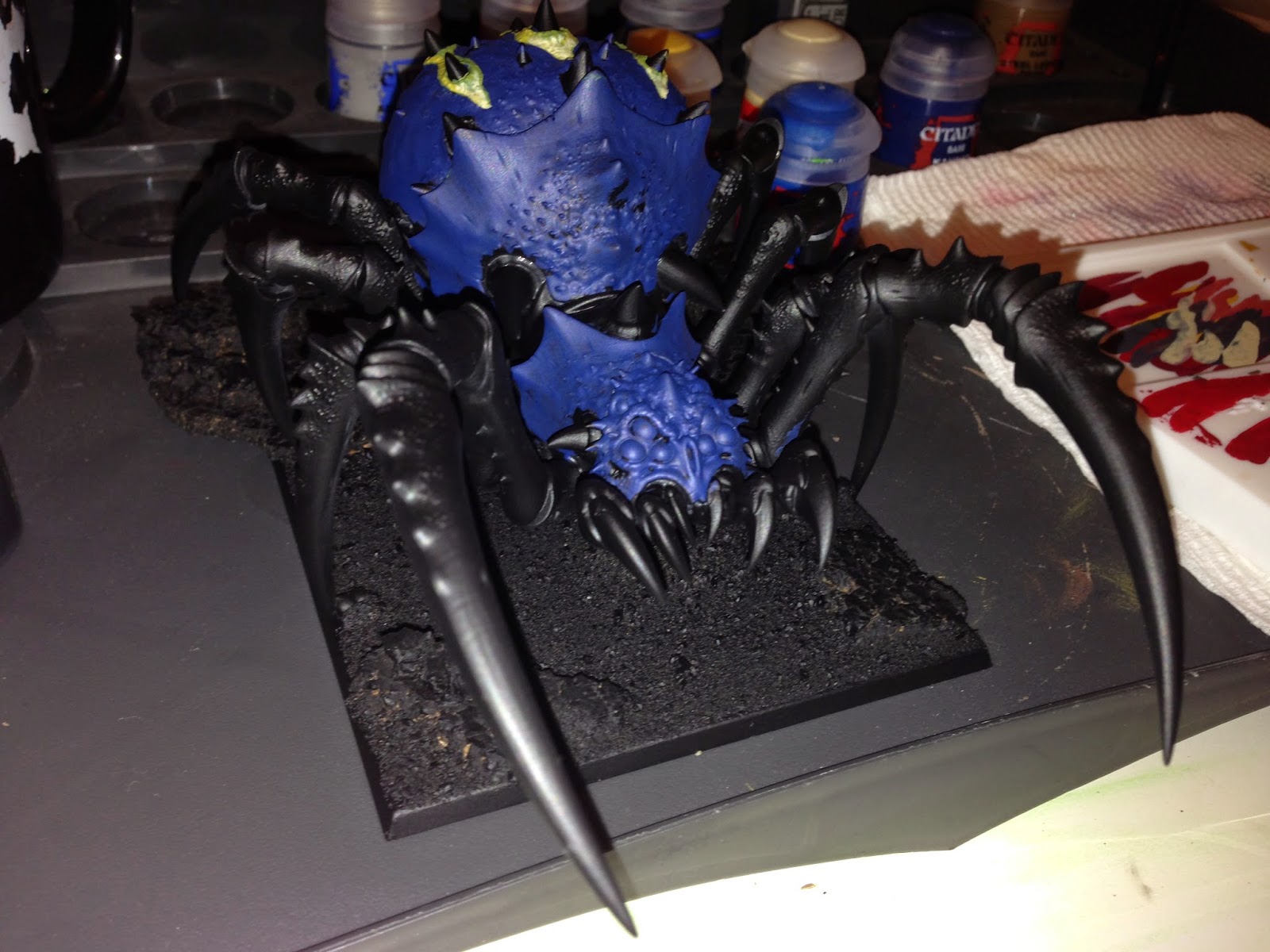 My wife and my cat both hate this model.  My cat jumped up on the table, saw this, her eyes got big and she fell off the couch backwards.  My wife wants it kept in a side room.  It's pretty funny.

I'm experimenting with color schemes right now.  I might end up using some of the poison dart frog color schemes for inspiration.  I'm looking for something really bright that screams "I'm super dangerous!"

I've been sick for the last week or so and haven't had the energy to do much of anything.  I haven't even really been eating.  I realized this morning that I hadn't eaten much more than a salad and a poptart a day for the last 3 days.  So today I forced myself to eat and I'm gonna try and get a little extra sleep tonight.

In the meantime, here is something awesome for you.  Yes, this is a Lego Land Raider.  Google the dude who does these.  There are lots more. 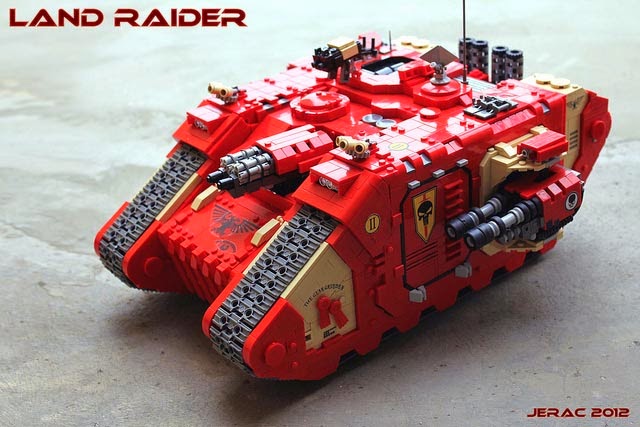 The Heroic mode is so freaking hard...

I think this is what having a stroke feels like.

This is specifically why I'm not painting right now. 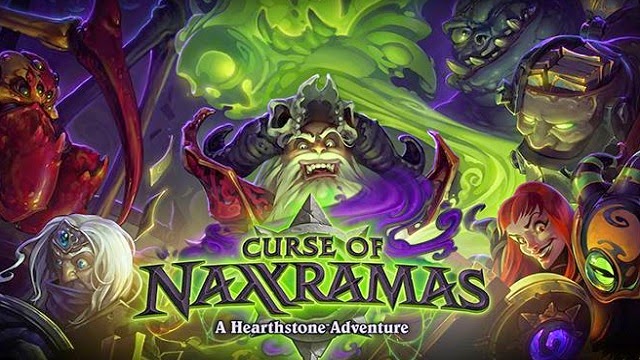 We've been hearing some rumblings of Space Wolf rumours lately.  This makes a lot of sense with Stormclaw having come out recently.  Stormclaw introduced a new HQ character, Krom Dragongaze as well as several new formations for the boys in grey (or blue-grey depending on how you roll).

Here is the rumour roundup that I've been hearing.

The Stormfang supposedly looks like half of a Caestus Assault Ram.  I'd imagine we'll see actual photos in several days as the White Dwarf leaks start to happen.  The default weapon is called a "Helfrost Destructor", which sounds a lot like something a Necron obsessed Iron Priest would come up with.  It has two firing profiles, both 1 shot at 24".  The first is a dispersed mode at S6 AP3 Large Blast.  The other is a S8, AP1 Lance shot.  Both have the Helfrost special rule, but no hints yet as to what that does.  I'm anticipating full rules in the White Dwarf, so we'll have less than a week to wait.

The Stormfang also comes with two twin-linked heavy bolters that can be upgrades to twin-linked multi-meltas or long range S8 AP2 missiles.  And, as one would expect from this type of assaulting ram vehicle, we'll get ceramite plating and power of the machine spirit.  I wouldn't be at all surprised to see that this is an assault vehicle.

Don't expect to be able to take a Wolf Guard unit and split them up.  All signs point to Wolf Guard "squad leaders" being unit upgrades for Blood Claws, etc.  Think along the lines of +10 points to upgrade one Blood Claw to a Wolf Guard.  It also looks like Wolf Guard vs. Wolf Guard Termies will be two seperate unit entries, so no more mixed armour units.  This also likely means that the Wolf Guard leading a Blood Claw unit won't have the option for Terminator Armour.  It really depends on how the upgrades go.

I did a little more work.  More base coat work.  This thing is going to take forever.  I've always just sort of drybrushed my models before.  The hazard stripes still need to be highlighted, but I'm liking how they're turning out.

I'm not sure what color to do the doors.  I might go with a cream color, or maybe just go crazy and attempt some freehand work.  I'll have to give it some serious thought. 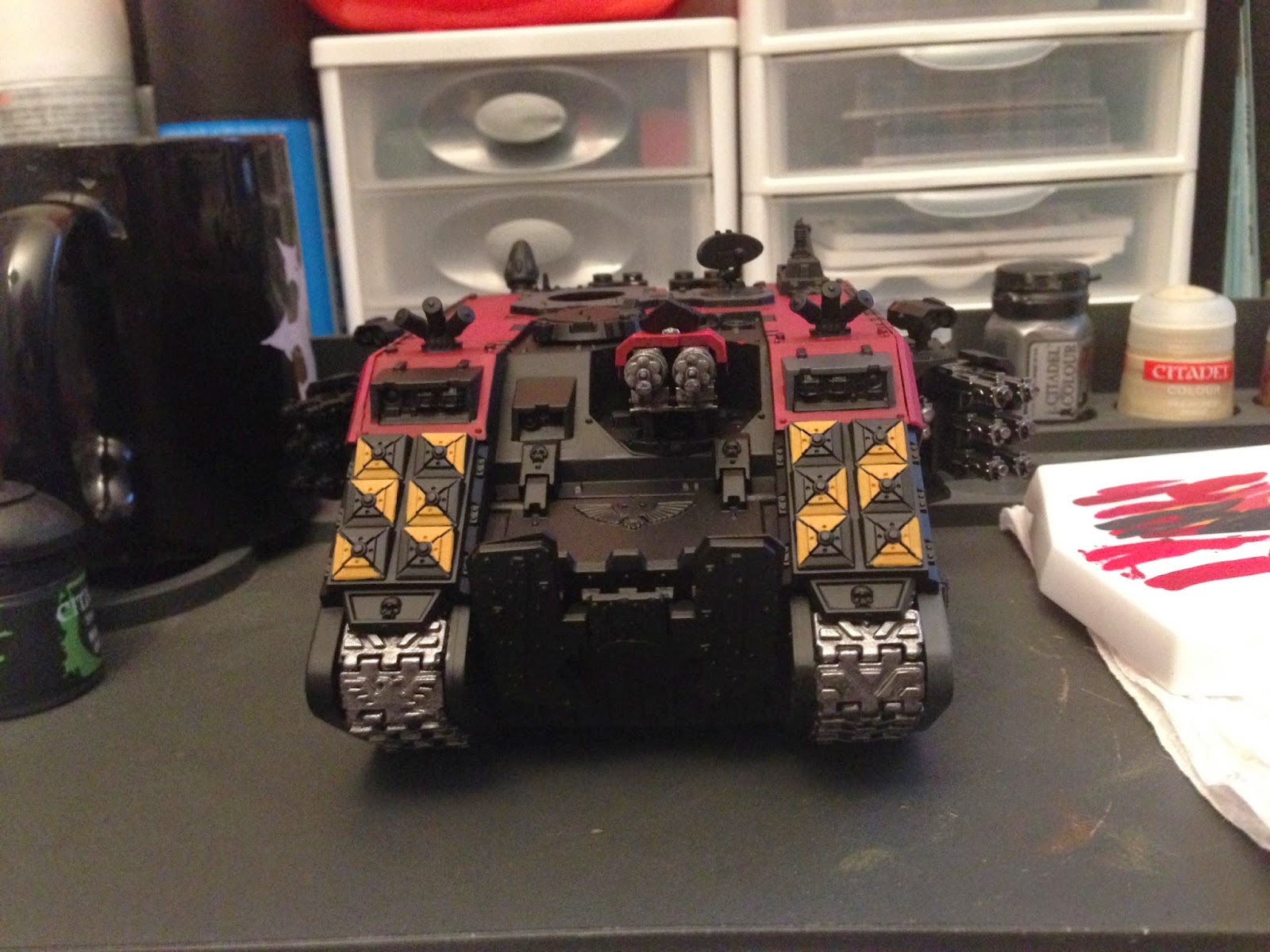 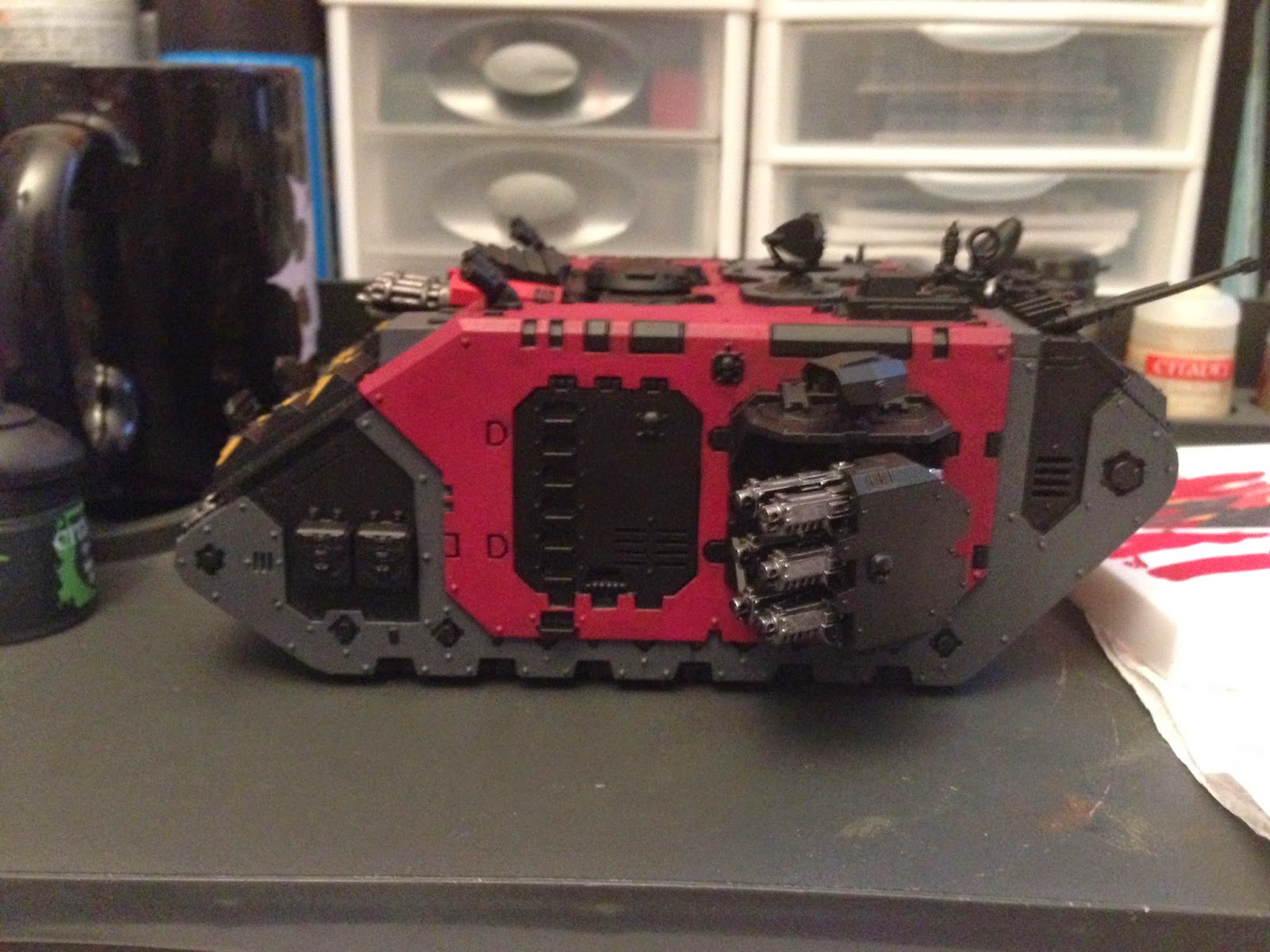 I was motivated this past weekend and did a little additional work on my Inquisitorial Land Raider.

I did a fair amount of the silver base coat as well as did more work on smoothing out the red.  I am more or less finished with the Assault Cannon (just needs highlights on the metal), other than a bit of Squig Orange line highlights.  The plan is to do a 50/50 Squig/Mephiston line followed by pure Squig.  I've done that before for reds and it looks nice.

I put the yellow base coat down on the left set of frag launchers.  I still need to base coat the right side and then add some brighter highlights.  I'm finding that I get bored with large sections of single colors, so I keep moving around a little.

Without further ado, here are a couple of work in progress shots. 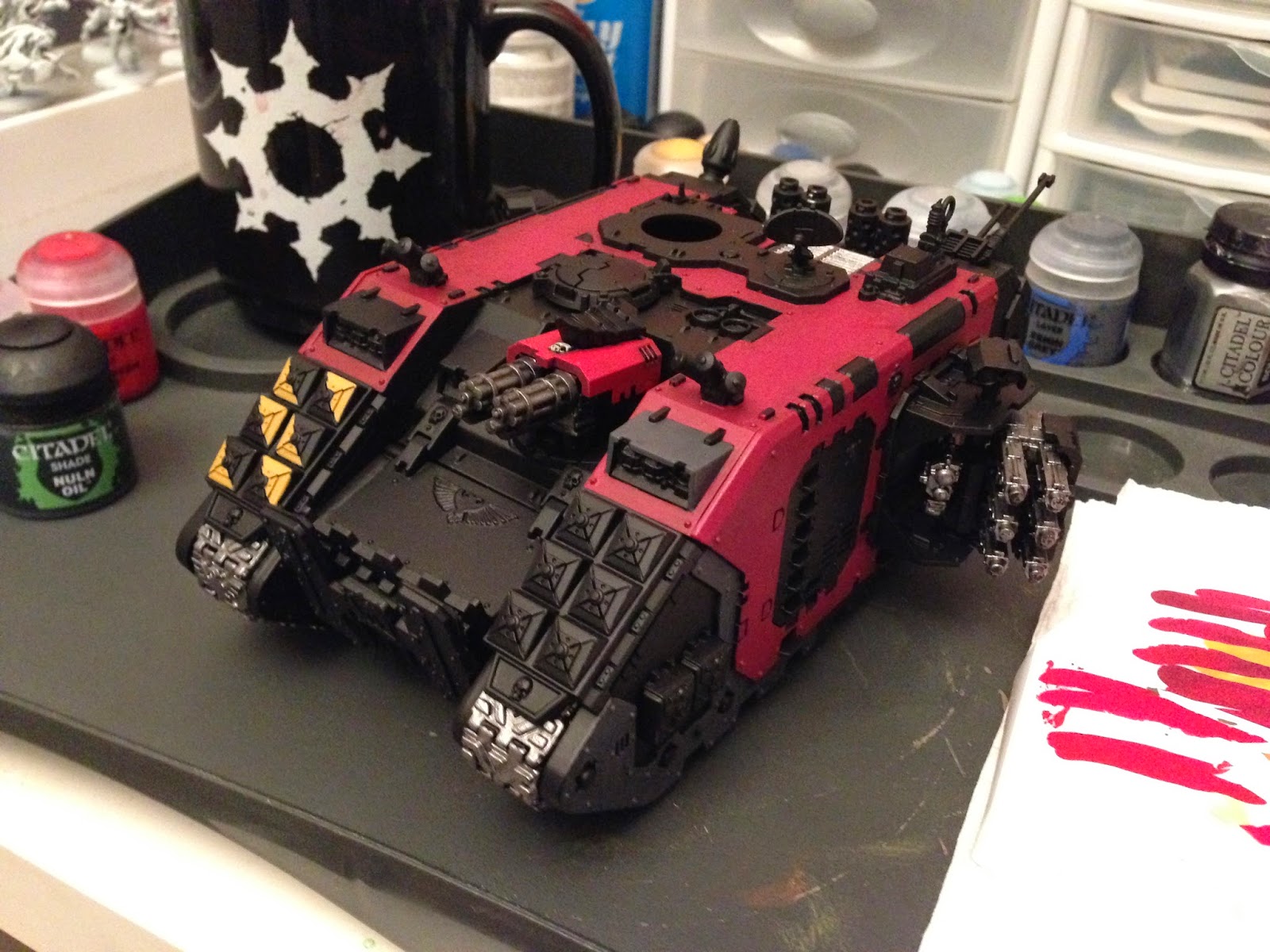 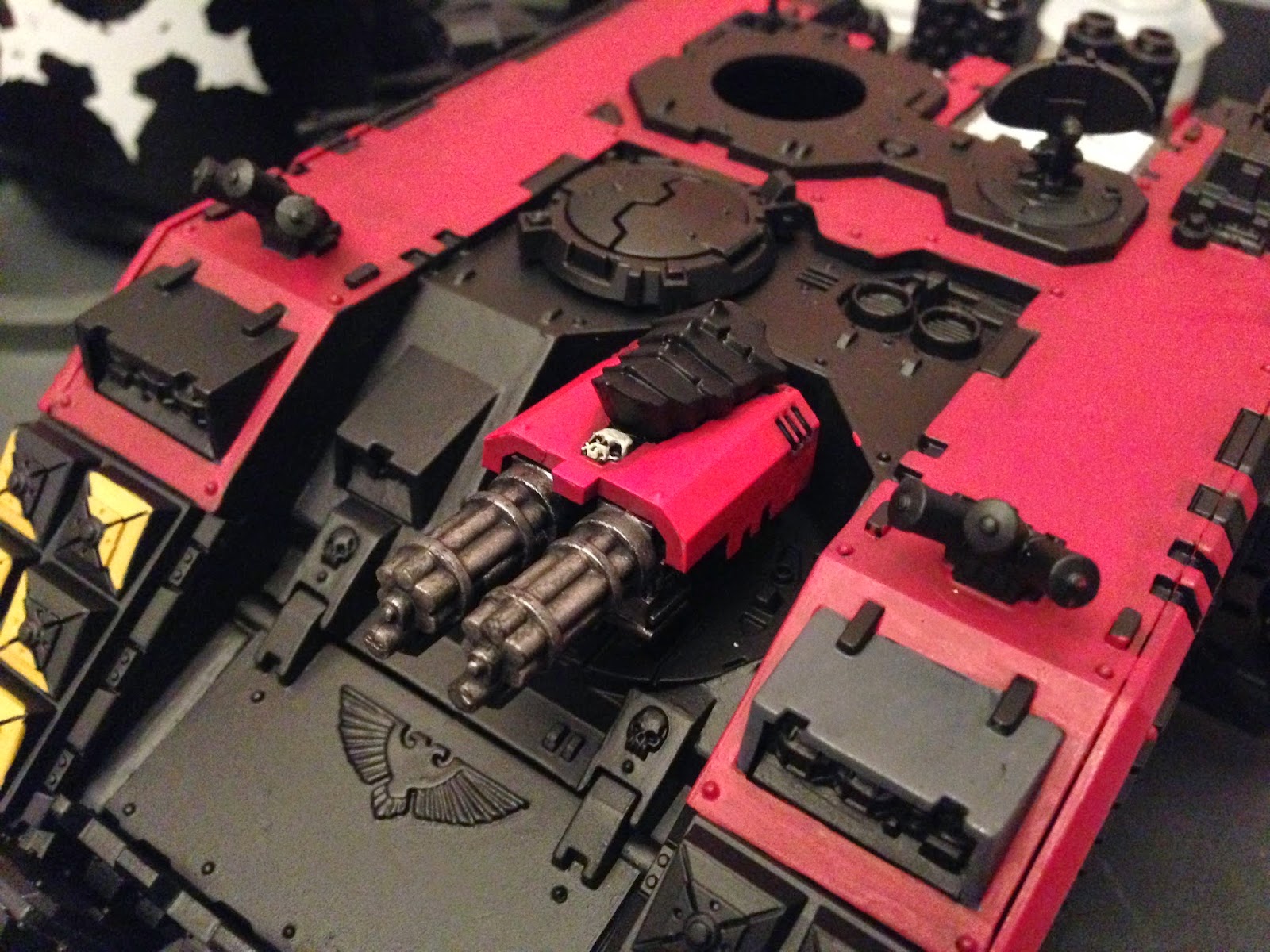 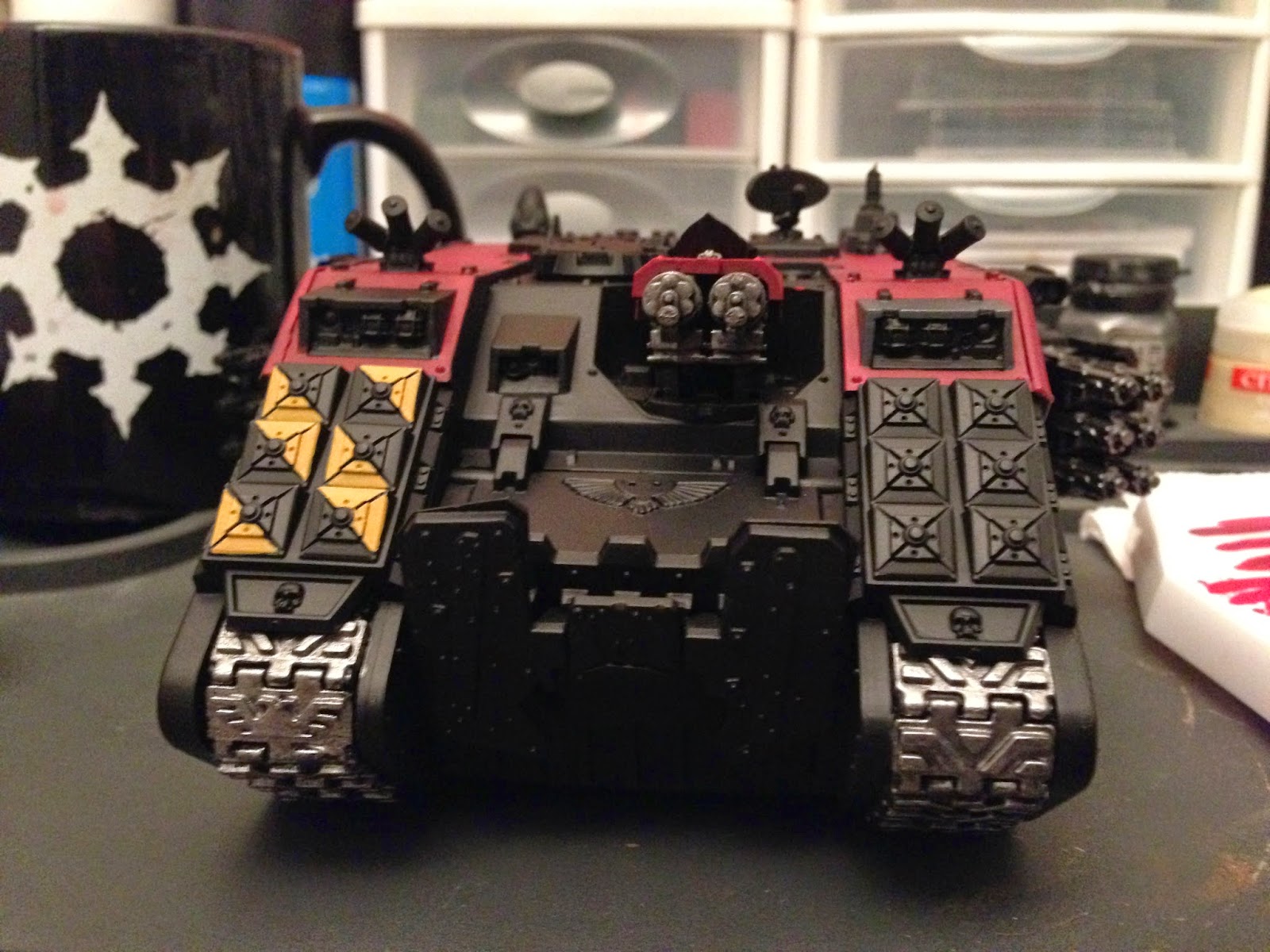 Just found some cool artwork on the interwebs.  Definitely good for some inspiration!

And what's with that poor Crisis Suit getting his leg torn off?  That's one wily Dread to get into close combat with a Jet Pack Infantry! 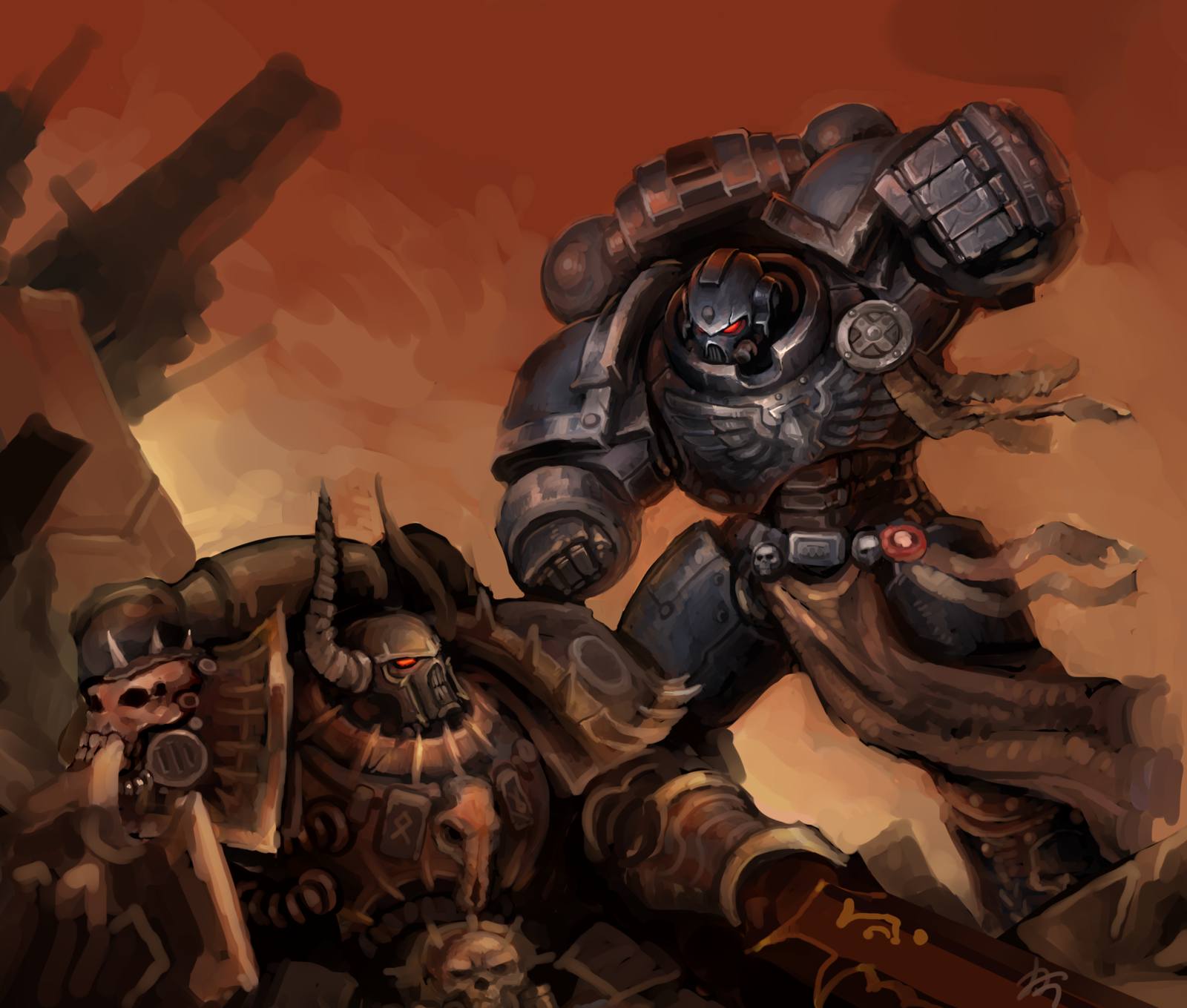 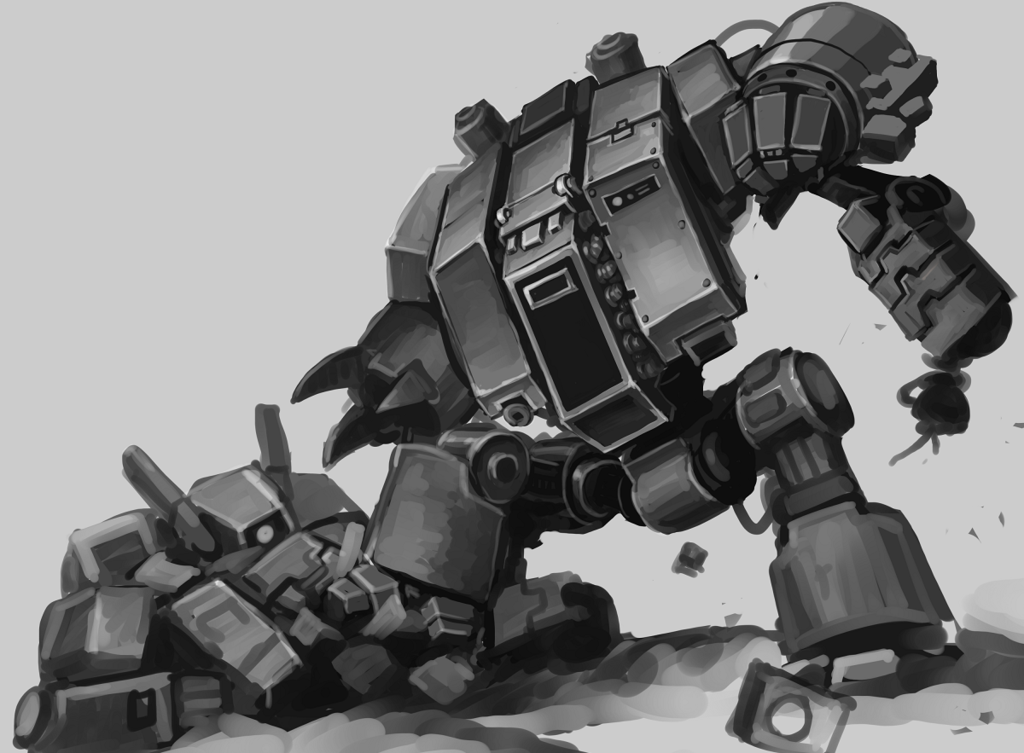 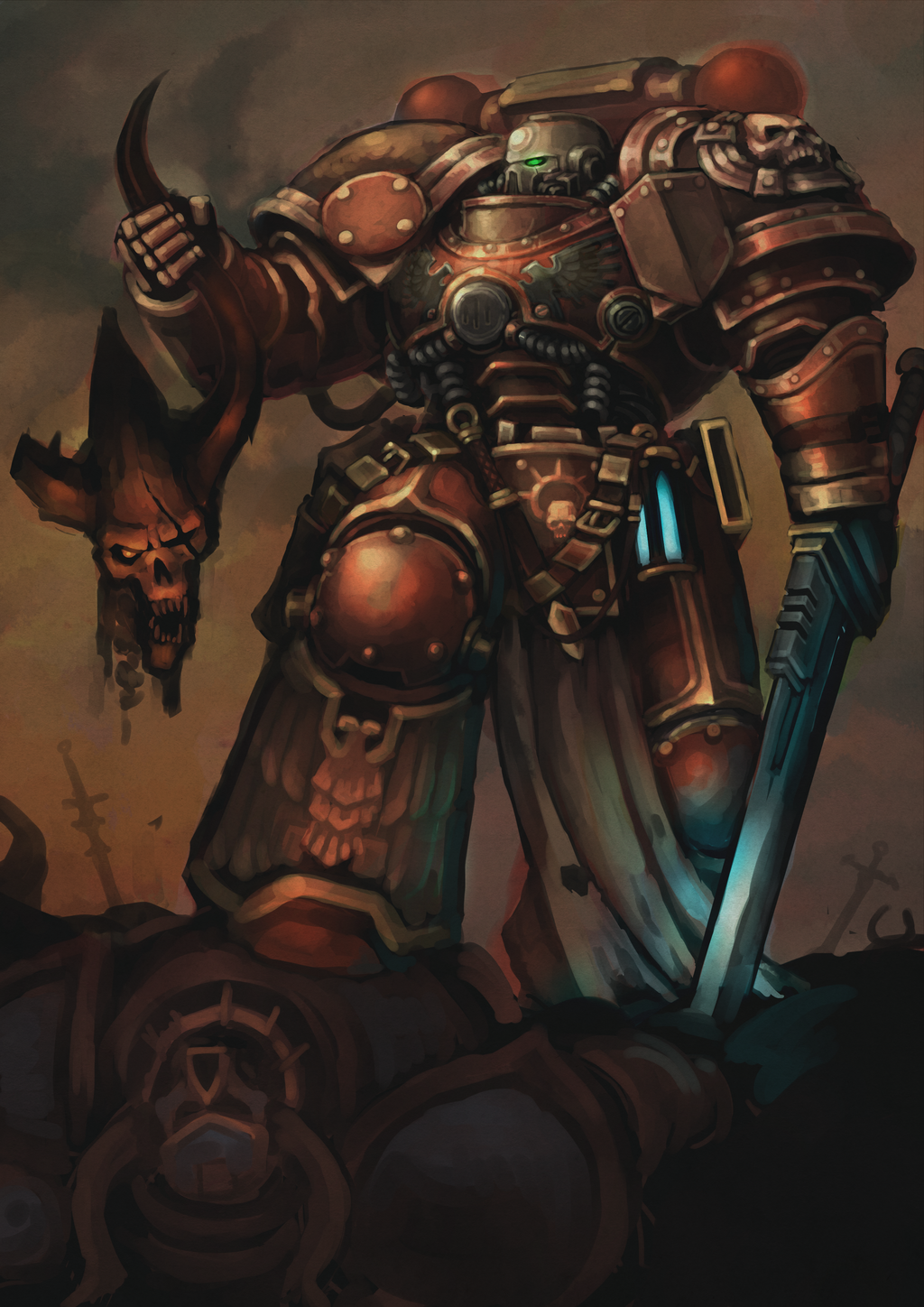 Check out the above link.  New information on a new realm of battle board with a city feel. 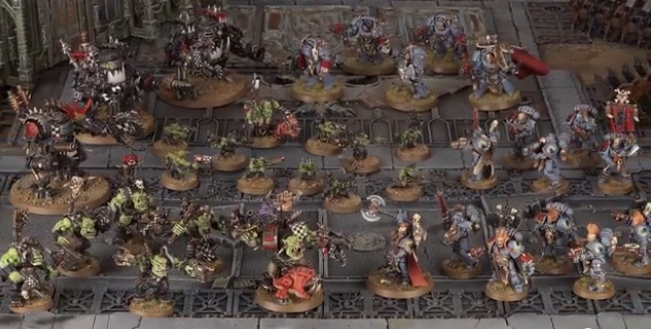 Hard to believe.  When I started this, my only hope was to guilt myself into occasionally working on models.  I didn't think anyone would actually look at my posts.  Pretty cool.  Thanks, everyone!

My Ordo Xenos Inquisitor, which you may have seen in a recent post, is going to need a pimpin' ride.  I decided to go with a Land Raider Crusader since it has 16 seats and this will let me field a large Inquisitorial Death Star.

I thought it would be nice to give the Land Raider some various xenos trophies.  The Assault Cannon has a little extra Tyranid Armour.  The boarding ramp has been upgraded with an Ork ram.  The Multi-melta must have malfunctioned at some point, because it's been replaced by a jazzed up Tau Fusion Blaster array.  Lastly, the Machine Spirit has been upgraded with an Eldar Spirit Stone array.  You should be able to pick the various upgrades out in the below pictures.

I also started base coating the armour.  I'm going to pain the armour in the vivid Blood Angel style red.  Currently, I've been able to put most of the base coat Khorne Red down.  Mephiston will go on top with a line highlight of Squig Orange.  I'm not sure what I'm going to do for the other areas, but I'm currently thinking of doing a medium grey and then ivory doors.  That way, the transport will match the Inquisitor's color palette.

This is going to take forever, because I want to make this look really nice.  The plan is to make this into my "showcase" army.  My Tau army gets a lot of positive feedback, but it's a very quick and easy paint scheme.  I want this army to really push my skills and patience.

This is something pretty awesome.  Games Workshop is putting out what I can only assume is the first in a series of army versus army campaign boxes in the Sanctus Reach line.  Sanctus Reach, if you're not aware, is Warhammer 40k's new campaign series.

So, this first box set is called Sanctus Reach : Stormclaw and features the mighty Space Wolves versus the mean, green fightin' machines...  the Orks!

I'm going to run down the details of what we know and then make a couple of comments and obervations.

First...  what is in the box?  This is what we know for sure.  The following models are included in the box:


The Ork contigent consists of a special new Warboss model known as Warboss Grukk and the contents of a box of Killa Kans, a box of Nobz and a box of Gretchin.

The Space Wolves consist of a new Wolf Lord named Dragongaze and the contents of a SW Terminator box and a SW Power Armoured dudes box.

These are NOT snap fit models!

We'll also be getting a mini version of the rules and a campaign book.

So what's it worth?  What are the numbers?  The price will be 125 USD, which is an amazing deal.  Let's add things up.


This comes out to a total of approximately 262 USD worth of value.  At 135 USD, this is a phenomenal deal.  Also, keep in mind that since the majority of these models AREN'T push fit, you'll have tons of leftover bits and buying multiple copies will give you a true variation in poses.

I for one can't wait for this.  I'll be making a preorder as soon as they go live and might end up buying multiple copies.  You can always use more of everything in the box and I'm excited by the prospect of Space Wolf formations and new HQ datasheets for both armies.

Lastly, this makes me strongly think that there will be a new Space Wolf codex sooner than later.

Happy Freedom Day One and All

I searched for "America Patriotic Warhammer 40k" and this was the first image.  Boom.

I decided that I wanted something a little different for my Inquisitor's Henchmen Squad.  I decided that this Inquisitor would go with abhuman henchmen for whatever reason.  I'm starting out with Beastmen and might end up adding some Squats/Ratlings to be shooters.

Here are a couple of quick photos.

The ones with two hand weapons will be Death Cult Assassins and the ones with shields are Crusaders.  The standard bearer guy is a Ministorum Preacher.  I added Ravenwing Shoulderpads that will all be the same Red and Ivory as the Inquisitor's robes.  I happened to have a ton of these shoulderpads laying around, so I decided these Beastmen could be from a "Winged Blade" tribe or something.  I also added a bunch of little pouches and grenades, etc. to make them look a little more grimdark.