I made a little bit of progress yesterday.  Ok...  a LOT of progress.  I finished up the 6 Crisis Suits and the 2 Sky Rays.  I made hovering bases for them to match what I did for my Devilfish.

This is just a quick shot from my iPhone at the GW Bear store.  I'll take some better pictures later.

I just got an email from Shapeways saying that they can't actually #D print the Claptrap robots.  I'm pretty bummed out.  I was really looking forward to getting some of these little guys.  I might have to take a look and see if some small toys were ever manufactured.  I know they made a large version, which is WAYYYYYYY to big.

I did end up ordering some of these Borderlands style Claptrap robots.  They are 28mm scale and should fit on a 25mm base with no problem.  My intention is to paint them up in my Tau army color scheme and use them as Marker Drone counts as.  I think it'll work out pretty well and fit the general theme of the Tau.

I'll take pictures of them assembled when they show up.  The website said they likely won't ship until September 10th or so.

I'm totally gonna have to buy some printable wet transfer paper and add the below to some of my Tau buildings and vehicles.  I think that would be SIGNIFICANTLY quicker than hand painting it over and over.  The caption says "FOR THE GREATER GOOD" using the Tau font.  I love it.

This was done by Aethergod of Deviantart.com.

Email ThisBlogThis!Share to TwitterShare to FacebookShare to Pinterest
Labels: Tau

I'm totally gonna buy some of these and use them as Marker Drones. I love Borderlands and Claptrap in particular.

A New Armies on Parade Board for my Tau Army

As a part of the Warhammer 40k Unit Cards attempt, I will need to take some nice photos of my models.  The best way to do so is using a background that matches the way they are based.

I went out to Home Depot and bought a 2" x 2" piece of plywood.  I then got a crap ton of cork and start tearing and gluing.  The technique exactly matches the bases I use for my army.  I'm hoping they will blend in pretty well once the army is painted.  The T shape cutout with the board edges front, left and right will be a road of sorts and I'll put two little Tau houses in the background.  I'm working on those also, but no pictures yet.  My local store is having a Halloween Terrain competition and I'm going to put little pumpkins outside the Tau houses and paint up models from different armies that will be little Shas'saals (Fire Warrior Cadets) out for trick or treating.

On a directly related note, my hands hurt like Horus himself stomped on them right now.  I think it's from dealing with all the pressing on the cork and spray painting.  I put on some Icy Hot, but all that's doing is making me smell bad.

Without further ado, here is the board in progress.  It has been sprayed black also, but that photo is pretty lame to look at.

Once upon a time, a long, long time ago, I used to play Magic: The Gathering.  I worked in a comic book store at the time, so it pretty much consumed my work life.  I've since quit and haven't really touched a card or followed the game for years.

I do remember a little application called Magic Set Editor.  Evidently, the program has been in constant development this whole time and is a lot more advanced at this point.

I've decided to use it to make some Warhammer 40k unit cards so that I'll more easily remember what wargear I have.  It'll also be easier to count up victory points at the end of the game.  I can just hand over cards as units die.

Here's an example of what I'm looking at.  I just used Pixlr.com and Magic Set Editior to cobble these together over the last 30 minutes or so.  A big shot out to Meleck for creating the base templates.  I added the spacescape background image.

That's right. I waiting for a Mexican wrestling match to start. I get asked to the weirdest things sometimes! I'm cautiously optimistic. Lol 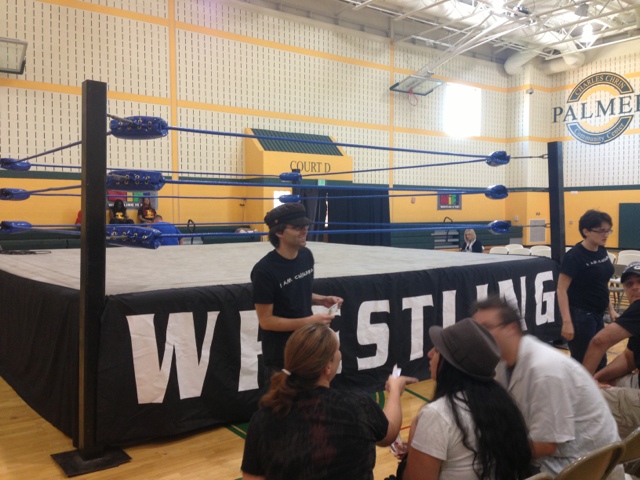 Email ThisBlogThis!Share to TwitterShare to FacebookShare to Pinterest
Labels: Wrestling

I finished the Broadsides, but unfortunately left them in the case at my local GW store.  I have my own shelf there!  haha.

I'll take pictures the next time I'm there (probably either tomorrow or next wednesday).

In the meantime, I need to start working on these next.  They have to be finished n 7 days to stay on task.

You'll notice that they all have magnets embedded in their arms.  That took fething forever, but was well worth it.  I'm considering painting the guns a different color.  Maybe metallic.  Maybe not.  I'm really uncertain on this.  The magic of magnets is that I can magnetize two sets and change my mind!

I'm think about using this as a Marker Drone. The idea came from my buddy Vincent.

Here's some proof that I've started to paint my army. While this isn't even remotely close to being finished, the scheme base is down. I need to do more detail work and then finish the bases.

I played my first game using my new Puretide Bomb list. It was devastatingly one sided. I feel pretty bad. I went to my local GW store and said, "I need a volunteer to help me test my d-bag tournament list." My buddy Gareth was willing to oblige. Afterwards, he said he might quit the hobby.

He took the first turn. As to deployment, I infiltrated the bomb to one side, but the Broadsides in the middle and kept the Skyrays one to each corner. He did a more or less front and center deployment. He went first.

Turn 1: He swarmed forward and was within assault range on my Puretide Bomb, so he foolishly declared an assault. The Overwatch killed all 10 of his troops. His other troops all moved forward and his shooting either missed or was covered by the first turn night fighting. On my turn, I moved forward and between the Puretide Bomb shooting, the Broadside shooting and the Skyrays, killed the other 10 man Assault Squad, a 10 man Tactical Squad and wounded the Assault Captain.

Turn 2: Things were looking pretty grim at this point. Gareth moved his troops forward again, and was able to successfully kill 4 drones (or ablative wounds as I like to think of them). On my turn I killed the remaining Tactical Squad, the 5 man Devs and the Assault Captain. I also wounded the Chapter Master.

Turn 3: The only thing Gareth had left was his Chapter Master. He assaulted the Bomb, and survived the Overwatch (do to a spectacularly bad round of rolling). Seriously, I should have statistically killed him 5 times over. Anyways, the combat ended in a draw and we decided to call the game as I would just have used Hit and Run to jump away and shred the Chapter Master.

End Result: A complete tabling in 3 turns is pretty solid. Granted, Gareth wasn't playing a tournament list, but killing 47 power armored Space Marines in 3 turns is pretty solid. I'm really happy with the results. One big lesson learned is to stay out of charge range if there's a remote chance the charger will survive Overwatch. I think this list is going to do just fine in the tournament.

I totally love the pulse rifle and sickle on top of a star logo.  This would actually be a perfect logo for some custom Chessex dice.  Maybe I'll try to work something up.  Chessex won't make dice with real Tau logos anymore thanks to a cease and desist from Games Workshop.  It's really disappointing, because I would throw money at GW if they would just make decent custom army dice.

I joined the local Archery Club last night after having been quite a few times taking the beginner classes. I didn't realize until the instructor made a comment last night, but I wear a Batman tshirt every time I go. Lol. I guess I'm working on my real life Ballistic Skill. I think I'm up to about a 2.5 at this point. I figure your average, trained human is BS 3. Rigorous training can result in BS 4. Naturals and avid marksmen are BS 5. Crazy, hyper focused snipers are BS 6 and up.

I did make some pretty awesome groupings though. 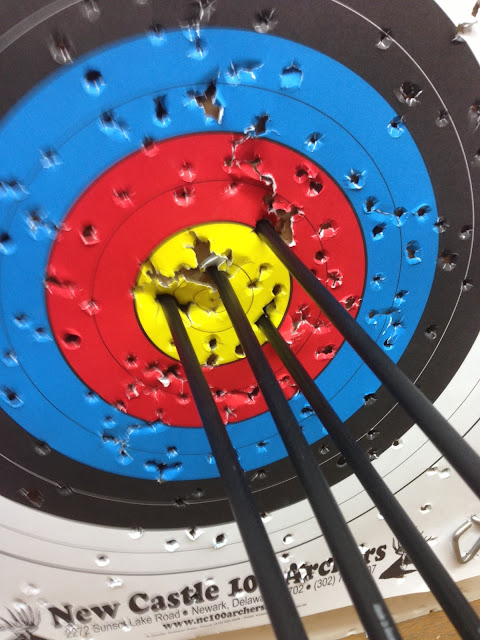 Email ThisBlogThis!Share to TwitterShare to FacebookShare to Pinterest
Labels: Archery

I did finish the custom Tau Ethereal I put together awhile back.  Here he is.  I'm particularly happy with how the blue scarf turned out.  I think it took me about an hour or so to paint this.

Eldar Allies for my Tau

I decided to add some Eldar allies to my Tau army, but wanted them to have a decidedly Tau feel.  So far, I have a Farseer to add some psychic power to my force and some jetbikes to zoom across the board and claim objectives.  These aren't due to be painted until early October, so they might not see any action for awhile.

This is what I'm adding to

Here are a couple of picture of my current Tau army on a custom made display board.  I actually won the Armies on Parade this year at my local Games Workshop store in Bear, DE.

Somebody set us up the Farsight Bomb

I've signed up for a tournament that is taking place in Plymouth Meeting, PA on October 15th.  I've decided to assemble and paint a Puretide/Farsight Bomb tournament list.  The list is as follows, more or less...

I've gotten the whole army assembled at this point and need to start painting.  The only things that are currently painted are the Fire Warriors and Shadowsun.  I've set up a schedule as such that I intend to keep to.


This will give me a week per unit.  I paint fairly quickly, and the color scheme is pretty easy to do.  Here's an example.  I won't be using this model in the tournament, but it shows off the color scheme.  This riptide took about 3-4 hours to paint.