So, Christmas has come and more or less gone.  As per normal, I didn't get anything hobby related.  I don't think most people have any real understanding of how I spend my free time, so I tend to get jackets and socks and things like that.  I'm appreciative.  Everyone needs jackets and socks.  Sometimes, you'd just rather have a robot.

To whit, I bought myself a couple of Christmas gifts that I'll be using to do some conversions.  First up is a Gundam model.  This thing is fully pose-able and I haven't decided on a pose yet.  I'm thinking it might end up as a Ghostkeel, but I need to do some work.  I want to build a Tau themed should pad like the Fire Warriors have, and also some better weaponry.  I'm torn on the head.  It looks pretty much like a Drone, so I might leave it as is, but with some antennas. 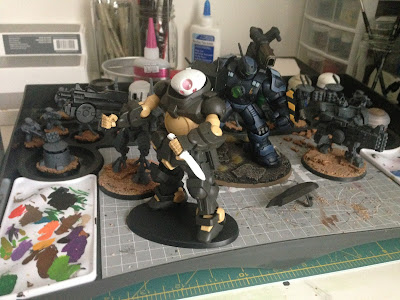 Next up is my new army for the new year.  This will probably be my big project for 2016.  I know the Tyranid Codex is terrible right now, but there is a rumor that it will be updated in early 2016.  I'm going to start off with some staple units that I'll most likely be able to use in any army list.  The first box I'm working on is some Termagants.  I'll be doing Devourers on these guys.  It's an Assault 3, S4, AP- weapon with a medium range.  I've gone up against these before and they do well on sheer weight of fire.  The box also comes with seven small Rippers that I can use to make Ripper Swarms.  In addition to the seven, I just won an eBay auction for nine complete bases of them.  I think the 9 bases have something like 28 individual Rippers.  I'll probably crack them apart, dress up the bases and put two Rippers on each base.  That'll give me a potential for 17 bases.  From what I understand, Ripper Swarms with the Deep Strike option are the gold standard for Troops choices in a Maelstrom game.

As you can see, the assembly line is beginning! 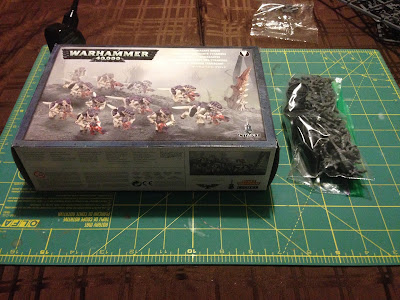 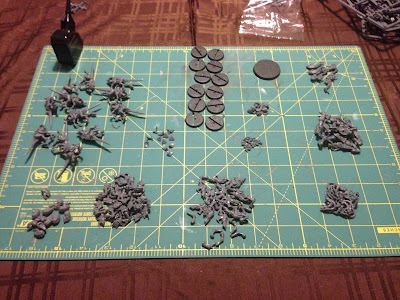 More to come sooner than later.  I'm going to try to get back into the swing of posting every Monday, Wednesday and Friday.