I went out this morning and picked up the latest issue of White Dwarf.  It's the one that comes with the full Warhammer: Age of Sigmar rules as well as one Stormcast Eternal faction model...  a Liberator.  I went ahead and assembled the model, using some cork and sand to give him a nice base.  As you can see, these guys are pretty chunky.  They come on 40mm bases and tower over regular Space Marines.  I would anticipate seeing them used as a base for "True Scale" Space Marine conversions over the next few months.

I also sat down and fully read the rules.  This was surprisingly easy to do as there are only a total of four pages.  I believe the expectation is that the rules will be freely available on Games Workshop's website starting tomorrow.  The rules give you a very general framework that describes the basics of how to set up the table, how to make an army and how to move and attack.  To get the more advanced rules, you'll need the War Scroll for that particular unit.  The White Dwarf has some example War Scrolls that will be in the upcoming Age of Sigmar boxed set released next week.

I'm thinking that this will be something along the lines of Magic: the Gathering.  That is to say, the general rules are very simple.  Once you actually start playing a game though, all the rules you'll need are right in front of you on each unit's War Scroll.

So, the game seems like it's going to be pretty easy to learn.  I already have a few questions, but I'm sure the online community will hammer those out in short order.  The biggest issue I see is that there doesn't seem to be any internal balance mechanism to make two armies have roughly the same power level.  There is an "Instant Death" mechanic if you start with 75% or fewer models than your opponent.  I'm not sure how this will work with 'elite' vs. 'horde' armies.  I guess I'll have to wait and see when the War Scrolls are released tomorrow.

In terms of the models, they're really nice.  My plan is to paint up the above guy this weekend and have a nice couple of photos on Monday.  Here are a couple of additional shots someone took, but are also available in the White Dwarf.  These are the two "Heroes" from the Stormcast Eternals side of the starter set.  The detail is really incredible for snap fit models. 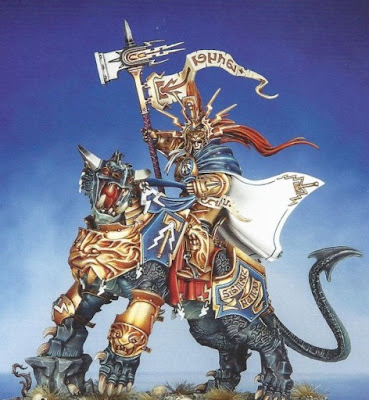 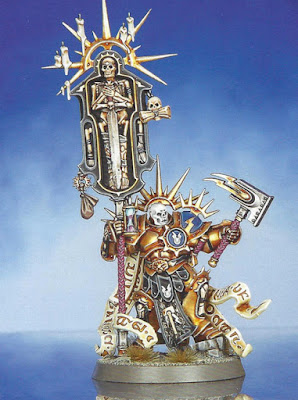