I have to build a Star Wars Armada army list for a tournament I'll be attending on February 20th.  There are a couple of minor issues with this statement.  The first is that I don't really know how to play the game.  I've played precisely one game and it was more of a demo type thing.  Pretty sure we left out some of the rules.  The second is that there's no way I have 400 points worth of models.  The only way I can get to 400 is by loading up on expensive and useless upgrades.

I need to get a couple more games under my belt before I attend this tournament.

I did pick these guys up today, because I was told they'd be useful in combat.  I literally have no idea.  I'm not used to being the guy who doesn't know how things work.  It's unpleasant. 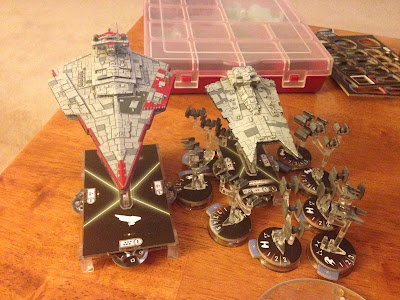 You'll note that I added a little red to the Victory Class Star Destroyer.  I'll probably do the same to the Gladiator Class.