I've been playing a little more Star Wars Armada lately.  It's the game that one of my regular gaming groups has more or less fixated on, so it behooves me to take it a little more seriously...  or to at least play it more.  My plan is to make lists that I like, but that aren't necessarily meta winning.

My first list is a four Victory Star Destroyer list.  Three of the Vics are II-class and the last is I-class.  The fleet is led my Admiral Konstantine, an upgrade that allows me to change opponent ship speeds up or down one at the start of each round if they're within long range of at least two of my ships...  which should be easy to achieve with four pretty chunky ships. 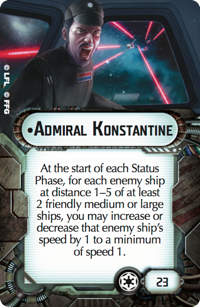 The three II-class ships are equipped as such... 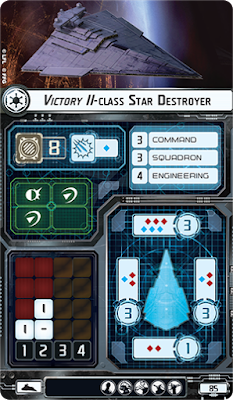 The idea is to pop Disposable Capacitors as soon as possible for a long range, 6 die shot.  The Dual Turbolaser Turrets give me a little bit of a reroll.  The Veteran Captain is there to pad me out to 400 points and give me a nav or engineering token when I need it.  I'm counting on second player for this list, so I might as well go to 400 points.

The last ship is equipped as such... 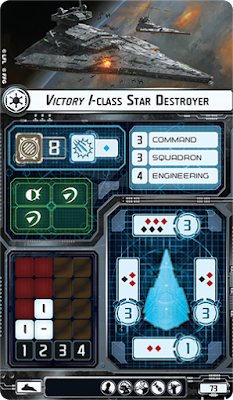 The idea here is to have this ship swoop in late game and drop 9 dice out the front and maybe another 3 out the side.  Spinal Armament also allows me to threaten out the rear if I need to.  Konstantine will ride in this ship.

I did get to play a game with this list and did pretty well.  I played against my buddy Troy, who is generally a much better player than I am.  We played the Contested Outpost mission, which netted me 100 points.  I ended up winning 8-3.

I'll be going to the North American Championship at Gencon later this month.  I think this is the list that I'm going to be flying.  I'll be absolutely crushed by anything with a lot of bombers, but I think I'll do ok against everything else.  Time will tell.  In either case, I'll be flying a list that I like to fly.