Somehow I missed that I've posted more than 300 times.  This is actually my 301st post, which is quite a milestone for me.  I've tried to get a blog going in the past, but have never been able to stick to it.  I'm pretty proud of myself.

In other personal accomplishment news, I walked 13.1 miles over the course of the day.  No all at once, but not bad for someone whose knees were so bad it hurt to walk over a mile a couple of years ago.  I feel like I could go right back out there and walk some more.  Haha!  Good times.

In hobby news, I've been going through and photographing all the things I've painted over the years.  Some are better than others, but I'll probably start putting the pictures up here on this blog once or twice a week.  I'll start off with a couple of Tau Empire Crisis Suit models.  One is painted up as a dual fusion Commander.  The three suits have a ton of magnetized weapons to choose from.  Their arms are all magnetized.  They're also all equipped with multi-trackers (the antenna thing on their left shoulders) and target locks (the thing on their right shoulders).  These guys are part of a seven suit block and intended to act as Farsight's Bodyguards.  The target locks let them fire at whichever target they want instead of the unit's target.  I generally equip three with plasma rifles, two with missile pods and 1 with a set of fusion blasters.  The seventh is equipped as a Ravensuit...  which is to say, it has no weapons, but has all the Signature Systems that buff the rest of the unit. 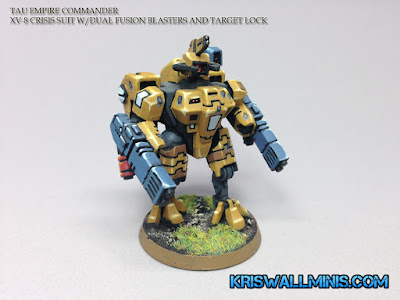 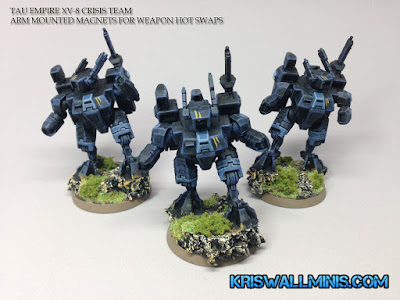