My friends and I started a Star Wars X-Wing Heroes of the Aturi Cluster last Friday.  It became apparent almost immediately that we were going to lose track of which X-Wing was which.  To fix this, I decided to paint up one of my T-70 X-Wings.  Ignore the base.  I realize it's from the wrong ship.  I just grabbed a random base. 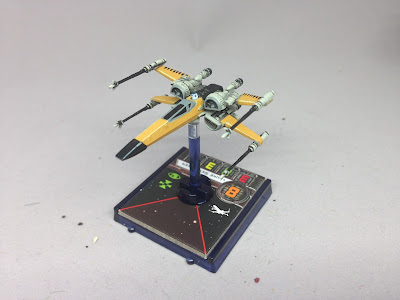 We all start out with the older T-65s, but my plan is to upgrade to a T-70 as soon as possible.  The progression will go something like this...

It'll take a total of 22 XP to get to where I want to be.  After out intro mission, I have the original 5 XP I started with plus an extra 5 XP.  That means I have the R2 Astromech, the Vectored Thrusters and I'm at PS3.

The goal is to have a ship with the durability and firepower of an X-Wing combined with the maneuverability of a TIE Interceptor.  I'll have one open Modification slot as well as an open Torpedo slot.  My thought process for the rest of the campaign is as follows...
It's going to take a bunch of weeks to get where I want to be, but I think this is my clear progression.