Path to Glory Review... A for Effort, D- for Implementation

As you might know, the General's Handbook describes three different ways to play Warhammer Age of Sigmar.  The first is Open Play.  It's basically standard, free for all AoS with very few guidelines on how to build an army other than "bring what you want and try not to be a jerk".  The third is Matched Play, or AoS with points.  It's a lot more structured and we've been having fun with it.  The second option, Narrative Play, is what I'll be talking about.

Narrative Play has several options, one of which being the Path to Glory.  In the Path to Glory, you pick a Champion from several options and then roll (or choose) to see which followers you get.  Everytime you win (or lose), you get to roll on a table to see how your war band grows.  On the surface, this seems like a good idea.  There are issues though. 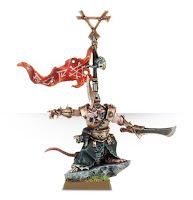 The main issue is that there is no real balance.  What I mean by this is that the options you can select aren't even remotely similar in power levels.  I was playing Skaven, so decided to choose a Skaven Warlord as my General.  This then gave me 6 follower units.  We had decided to roll randomly and I ended up with 10 Clanrats, 10 Stormvermin, 2 Rat Swarms, 5 Plague Monks, 5 Plague Censor Bearers and a Warlock Engineer.  So far so good.  That seems like a solid list that would compete OK against similar lists, right? 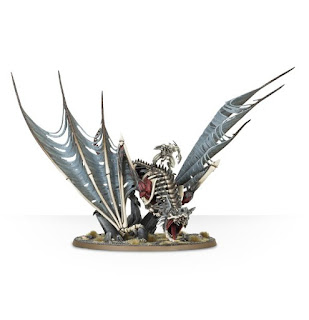 If only I was going up against similar lists.  My one buddy plays Flesh-Eater Courts.  In Matched Play, his army is strong, but not close to unbeatable.  In our Path to Glory inaugural fight, he dominated.  Between his General being an Abhorrent Ghoul King on Terrorgeist and all of his randomized units being measurably more powerful than, say, 5 Plague Monks, he started out with a much more powerful army.  We assigned points to the randomized rolls based on the Matched Play numbers only to find that his starting war band BEFORE summoning was 900 points.  Mine was 575.  That's a pretty huge power divide.  By the time I'd been tabled on turn 4, he'd summoned another 680 points worth of models.

Let me say this...  mainly because I think he'll read this and I don't want him to think I'm pissed or anything.  I had a good time.  I don't blame the way he played his army.  I think I would have played it the same time.  I'm just...  utterly perplexed as to what I was supposed to do.  Matched Play points aren't always the most balanced, but are pretty decent.  This was just too one sided.  I think if we'd played the scenario 100 times, my buddy would have won 99.  I have faith in the dice gods to give myself at least one scenario of lucky dice rolls.

It was actually a three player game.  You'll note that I didn't mention the other player.  That's because he deployed in the corner and couldn't compete with the Terrorgeist's movement.  We did the math.  The game would have been long over by the time his Spirit of Durthu and Treelord were able to get close enough to engage.

We talked about it afterwards and came up with a couple of ideas.  I'm not going to go into everything in detail, but I will say that we came up with something that we're going to try.  I wrote everything down and created a rule set to govern Age of Sigmar War Bands with an eye towards narrative play, building a connection to your models and slowly growing your force.  We'll be trying it out over the coming weeks and I'm sure I'll be uploading new versions on a pretty regular basis.