Oh man.  I do NOT have much time left between now and the tournament on Saturday.  Like, literally a matter of hours.  I have one of those safe, yet somewhat boring cubicle jobs where I wake up, sit in a box for 8 hours and then come home.  My personal life, therefore, starts at about 5:30PM each day.  I have to do adult things like laundry and making dinner.  What this means is that I realistically have about three hours per night on Tuesday, Wednesday, Thursday and Friday.  That's about 12 hours of hobby time remaining to prep an army for Saturday.

Anybody want to take bets on whether or not it'll happen?

I was able to get a little work done today.  In what I'm sure will be a spectacularly terrible idea, I've decided I'm going to prime the rats white, but the bases black.  I want to do a sort of slime effect.  Long time readers will recognize the effect from the Ork Dread Mob models I did.  The picture doesn't do the effect justice.  I'm using puffy, glow in the dark fabric paint.  It goes on like PVA and dries a little darker then in the picture and glossy. 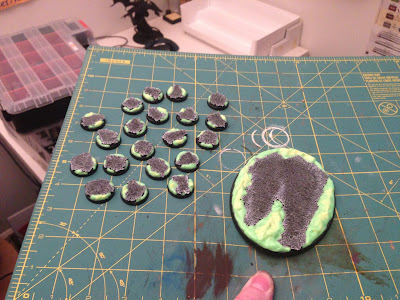 I got the Plagueclaw and 20 Plague Monks assembled.  No pictures because I'm super lazy and don't feel like going to get a camera.  Seriously...  my phone is maybe 20 feet away from me right now.  Not gonna lie.  That 20 feet sounds exhausting.  Hopefully tomorrow I can assemble the other 20 Plague Rats and get the other bases painted up.  That leaves only the Plague Furnace and Verminlord to assemble and prime.

This is totally doable.