Fantasy Flight Games just announced that they'd be adding two new ships to the tenth Wave of Star Wars X-Wing releases.  These two ships are based on the upcoming Rogue One movie.  In a shockingly original naming convention, the Rebel ship is called a U-Wing.  I'm assuming that the Rebellion can only field 26 different types of ships.  We have A-Wings, B-Wings, E-Wings, K-Wings, X-Wings, etc.  I supposed we could have accents.  Maybe an Ä-Wing is better engineered than an A-Wing?  It would be nice to have more variety.  The Imperial ship is yet another TIE variant.  This one is called the Striker. 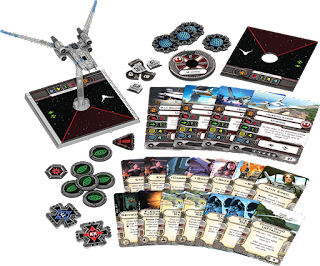 The U-Wing looks pretty cool.  It has these giant swept back wings that actually sweep forward also and form the U shape the ship is named for.  I'm really hoping that the model has the ability for the wings to move.  X-Wing ships are usually pretty static, but the Lamba-class has moving wing, so it's possible.

I was a little surprised to see that the ship is mounted on a large ship base.  It looks like a star fighter.  It looks like it could easily fit on a smaller base.  Then again, it has better than average stats for a fighter.  It has 4 hull points as well as 4 shields.  The single agility won't keep this around forever though.

The ship does have two crew slots, presumably to accommodate the two new crew cards included in the set. 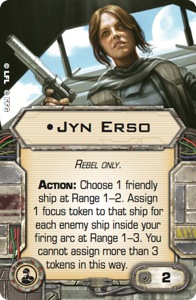 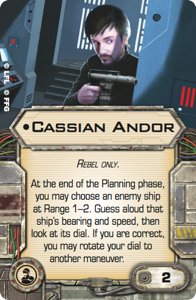 I think Jyn Erso is the main character for Rogue One.  At least, that's what the trailer makes us think.  Cassian is the dude standing in the background of most of the scenes Jyn is is, so he's probably the side kick.  Jyn can load ships up with focus tokens while Cassian is going to be great if you're good at guessing what your opponent is going to do.  Honestly, if Cassian was on the field, I'd probably pick my second best move every time to make his guessing game harder. 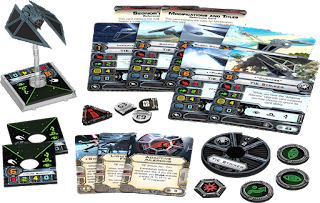 The Imperial ship is the Tie Striker.  Billed as a predominantly atmosphere based fighter, the Striker has a silhouette that makes you think it might understand the concept of aerodynamic, while still remaining firmly in the TIE family.

The TIE Striker has 4 hull points and no shields, making it somewhat durable...  for a TIE.  This ship has a Striker only Title available called Adaptive Ailerons.  If you take this Title, you are able to perform what is essentially a boost action immediately before revealing your maneuver dial.  At least two of the pilot cards have a skill of 6 or better, allowing an Elite upgrade.  I'm thinking this ship would be insane in terms of maneuverability with Push The Limit and Engine Upgrade.

Think about it.  The pilot skill 8 card...  a unique pilot named "Duchess"...  can boost, maneuver, and then barrel roll and boost again, in either order.  Of course, the Adaptive Ailerons title only works if you're not stressed, so you wouldn't be able to do this every turn.  I'm sure there are better combinations, but I can't think of another ship that could literally cover have the board in one movement phase.  You can see below an example of this ship arc dodging its way out of the X-Wing's path and into a perfect firing arc. 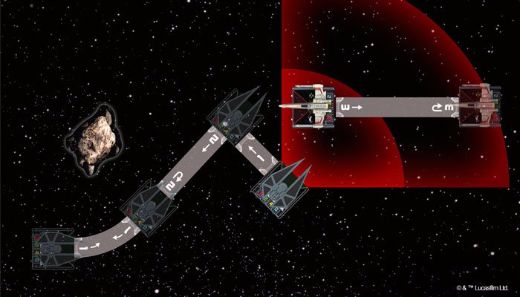 Overall, I'm pretty excited about the new ships.  I've never really been into Star Wars video or computer games, so I simply don't recognize the majority of the ships that are released for this game.  TIE Fighters...  sure.  TIE Punishers?  TIE Defenders?  TIE Phantoms?  Not so much.  They look cool, but don't have the same impact as a ship you've seen dog fighting on the big screen.

Depending on its upgrade cards (I see 14 in the picture above!), I might pick up a U-Wing.  I WILL be picking up one or two Strikers.  They're just too cool looking and I'm a predominantly Imperial player.