FFG announced the third faction for their Runewars game today.  The game is set to launch two days from now with the first two factions.  The third...  the Latari Elves...  should be released sometime this summer.  FFG isn't always perfect at hitting targets, but they're saying Q3, which would be July, August or September. 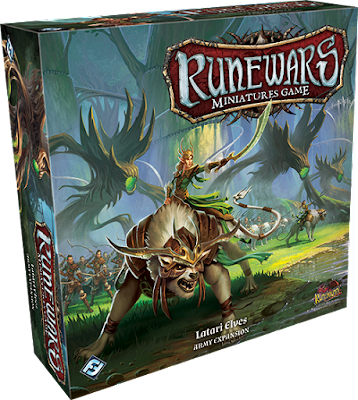 The format for this army release is a nice surprise.  The "Army Expansion" box comes with the same amount of stuff for the Latari Elves that you would find for either of the two factions in the core box.  The price is $60, which isn't as good of a deal as the armies in the core box, but is cheaper if you only want one faction.  "But I need the templates and tokens and whatnot", you say?  Keep reading.

On closer inspection, it looks like it also comes with stuff everyone can use...  namely, two double sided terrain tiles.  The terrain tiles are the big flat green things to the right in the picture below.  I'm also seeing at least one new deployment card.  I would imagine that this means people who aren't interested in the Latari Elves will still have a reason to buy the box.

The models are pretty snazzy.  I like them much more than the human faction.

The Scion, in particular is very nice.  It's a different, more viney take on the sterotypical treant monster.  I'm looking forward to finding out more about these in the future.

FFG also announced a Gaming Essentials Pack.  It's basically everything that comes in the Core Set, without the models.  In other words, everything you'd need to make the above Latari Elves Army Expansion box viable without needing to get a Core Set.  It's priced at $25, which seems a little high, but probably isn't too bad given that it means you don't need to buy a core. 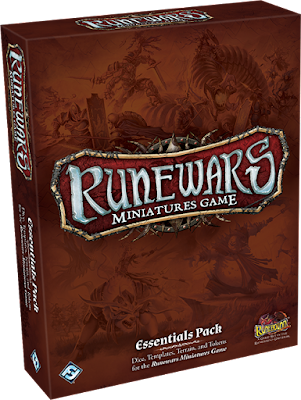 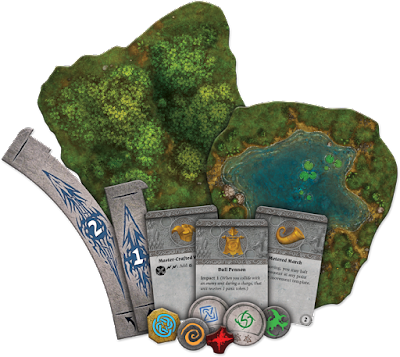