I haven't been doing much assembly lately and got the modelling bug.  Instead of filling my empty project bin with something already assembled - and Emperor knows I have plenty - I decided to throw in a box that needed some work.

I bought a second box of Rangers/Vanguard a while ago and only pulled out the Arquebus bit to give my first unit two.  I can't believe only one of each weapon comes in a 10 man box given that the rules allow you to take three of each in a 10 man unit.  I was left with 10 bodies, two Plasma Calivers, two Arc Rifles and a whole host of Prime bits.

After a relatively small amount of thought, I decided on two 5 man units.  One will be Rangers with the two Arc Rifles, an Arc Pistol, an Arc Maul and an Omnispex.  Here they are... 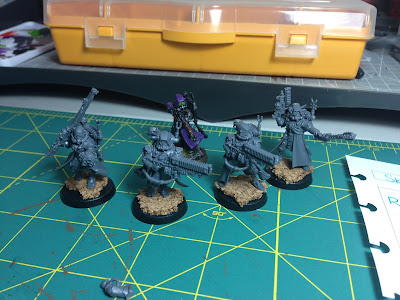 You'll note that there is one painted guy.  I decided to take one of the spare bodies and make a proper Prime for my previously painted 10 man unit.  I haven't quite decided how to equip him yet, but he's replacing one of the painted dudes in the first 10 man unit.  That'll make these 5 guys quicker to paint.  This is my Haywire squad.  They're vehicle killers.

Next up is the Vanguard unit.  You'll notice that there are 6 of them and that one looks a little...  non standard.  The tracked body is actually a Taurus Gun Tractor base from Anvil Industries.  If you're unfamiliar with them, you should check them out.  They're awesome.  The Taurus Gun Tractors can be purchased here. 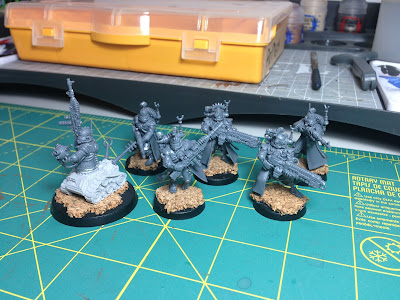 I gave the two Plasma Caliver guys fancy looking heads.  I did this partly to set them apart and partly because they have little optics on the side of their helmets.  That will totally make the dice roll better...  right? 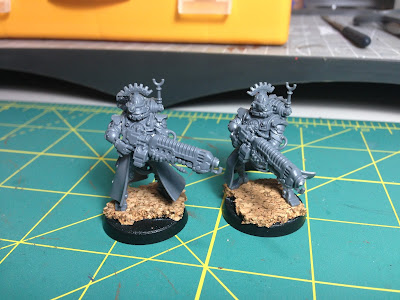 The Prime has the cog mohawk helmet.  I gave the tracked Vanguard dude the Omnispex.  I'm optimistic that he'll look better when he's painted.  The body is the unused hatch guy from the Onager Dunecrawler kit.  I think he looks like a tiny Kataphron. 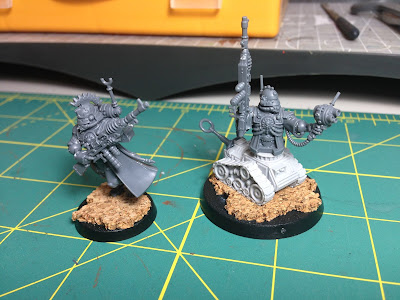 The goal is to get these guys sanded and ready for priming in a day or two.  I just don't have it in me right now.  I know that's ridiculous since it only takes about five minutes, but it is what it is.