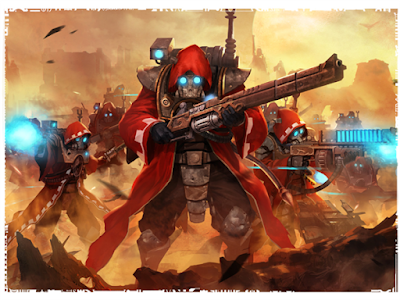 This is just a quick run down of where I'm headed with my AdMech Skitarii army.  The Skitarii Maniple Detachment is great to work with.  You only need two Troops choices to start an army...

There are tons of optional things you can take.  Also, unlike the overwhelming majority of non-Combined Arms Detachments, you're allowed to take a Fortification.

As I type this, I only have one Troops choice painted.  Project #8, "MOAR Rangers", is currently in process and will be the second Troops choice.

I think I'll end up with this, which is basically a Battle Maniple Formation with an extra unit of Rangers.  I have to finish painting 5 models and then assemble/paint 15 more.  That's basically 4 "bin projects" of 5 models each using my current organizational scheme.  Should take a couple of weeks, depending on what else comes up...  like new Tau?