I need to paint up more Rangers to get my AdMech army to a playable state.  I bought a second box and pulled the big, sniper looking gun out of it.  The goal is to ultimately have a ten man unit with two of the big weapons and then to assemble my other ten dudes as two five man Skitarii Vanguard units with one special weapon each.

Nothing much to report here, but as you can see, four of the models are already primed and ready to go while the fifth requires a primer coat.  I would have done it tonight, but it's pitch black outside.  Heavy cloud cover and no real outdoor lights equals priming isn't on the table.

More to come soon.  I hope to have these painted before the next update. 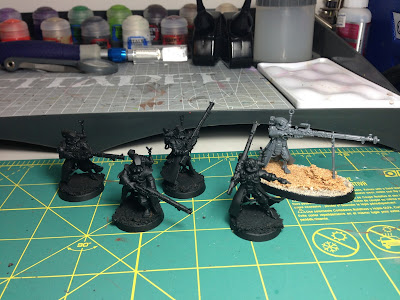