So, I'm not a Gundam dude.  I've bought a couple of those little Gundam Converge for making Tau Crisis Suit conversions.

I got the below model kit as a present.  I checked the price, because I was curious to see how much these things cost.  45 USD.  Keep that in mind as you read this.  Keep in mind that a Space Marine Dreadnought is 46.25 USD at the same time.  This is your point of reference. 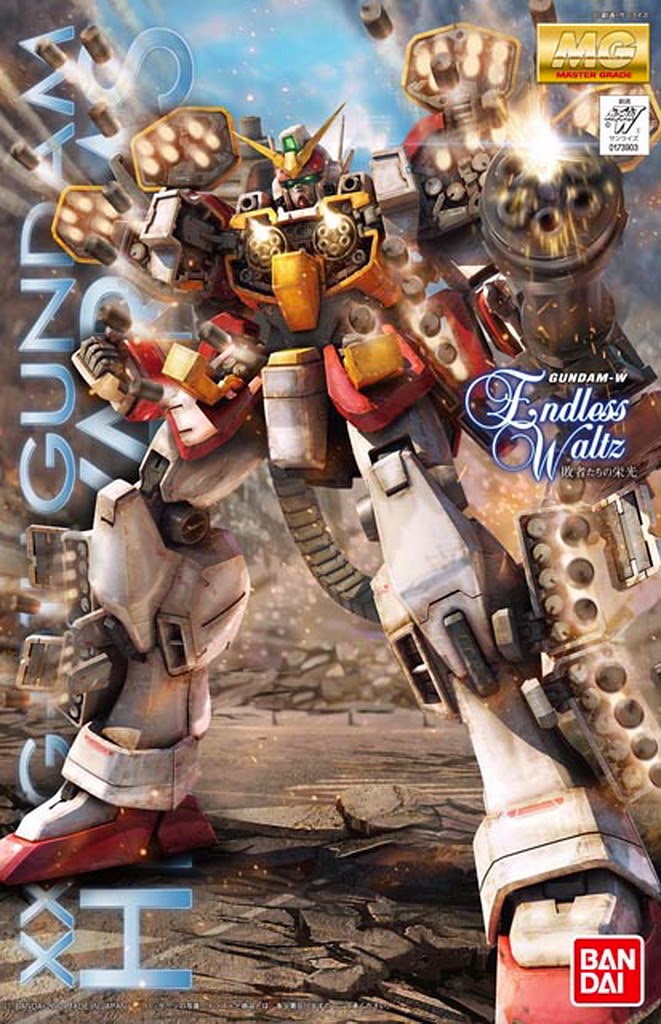 This is the front of the box.  The instructions give you an idea of what the model looks like finished. 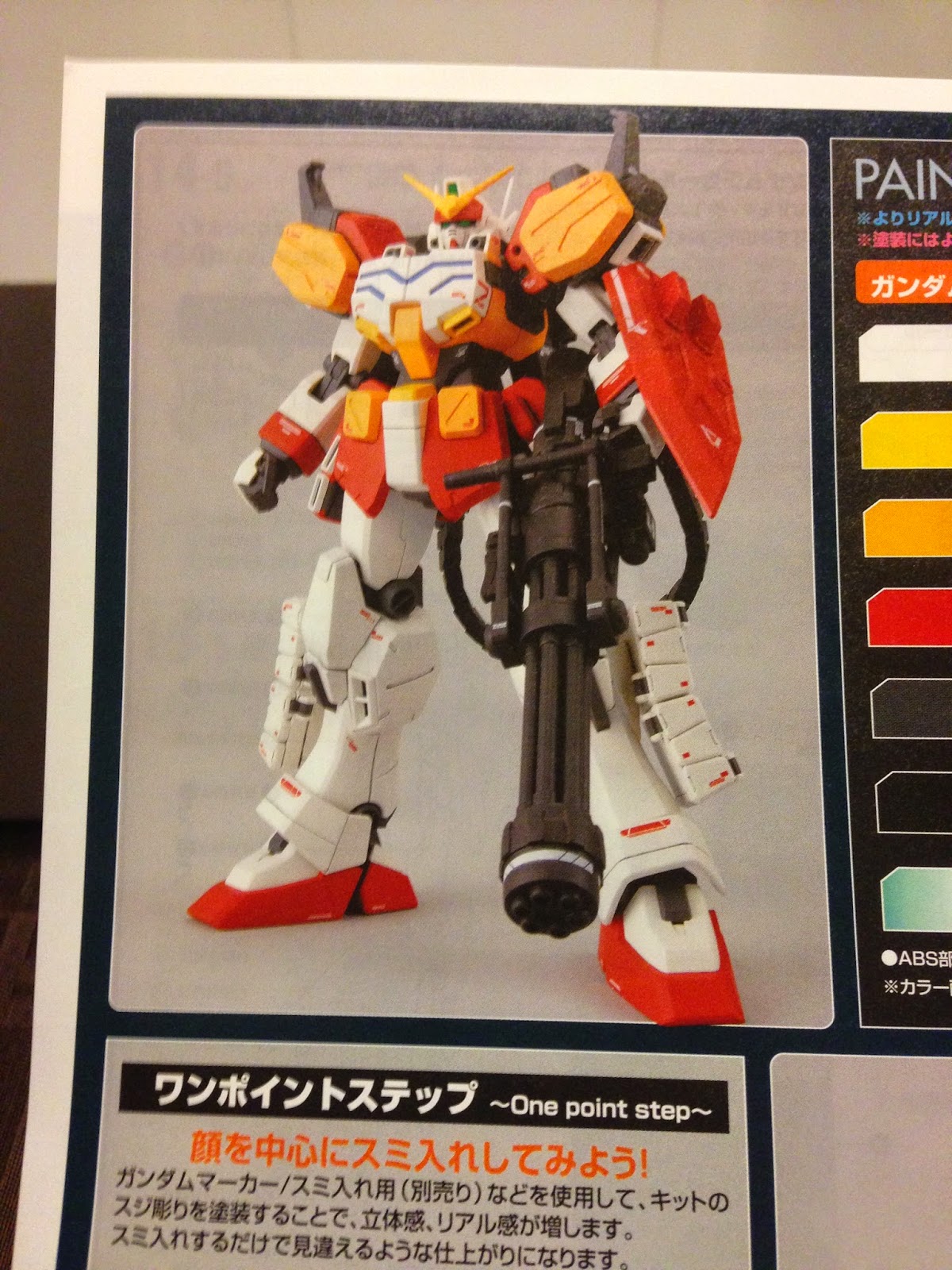 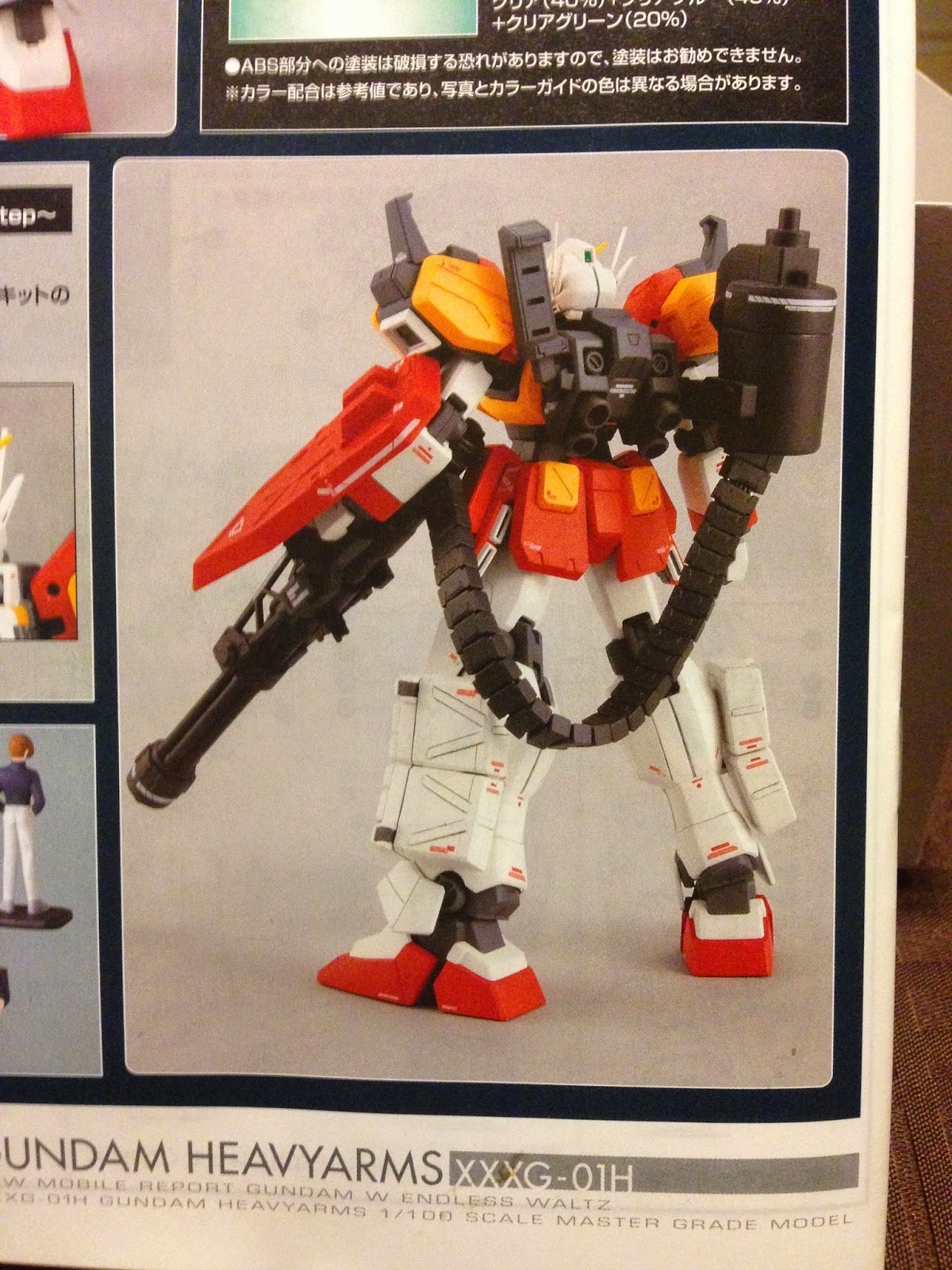 Let me stress...  the above presentation requires NO PAINT.  This thing comes in a multitude of plastic colors.  Some of the sprues actually have multiple colors in one sprue...  and they're all clearly labelled. 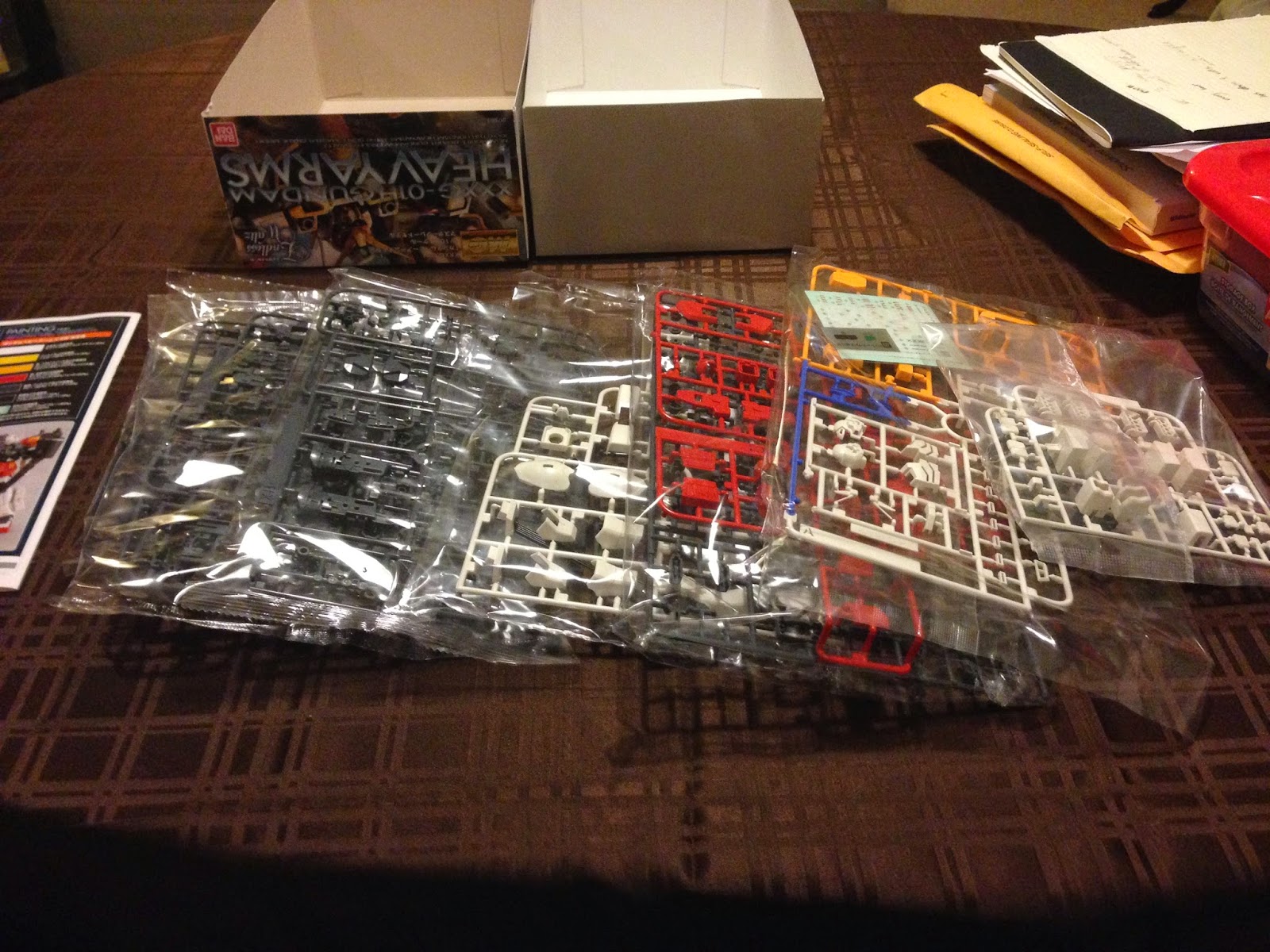 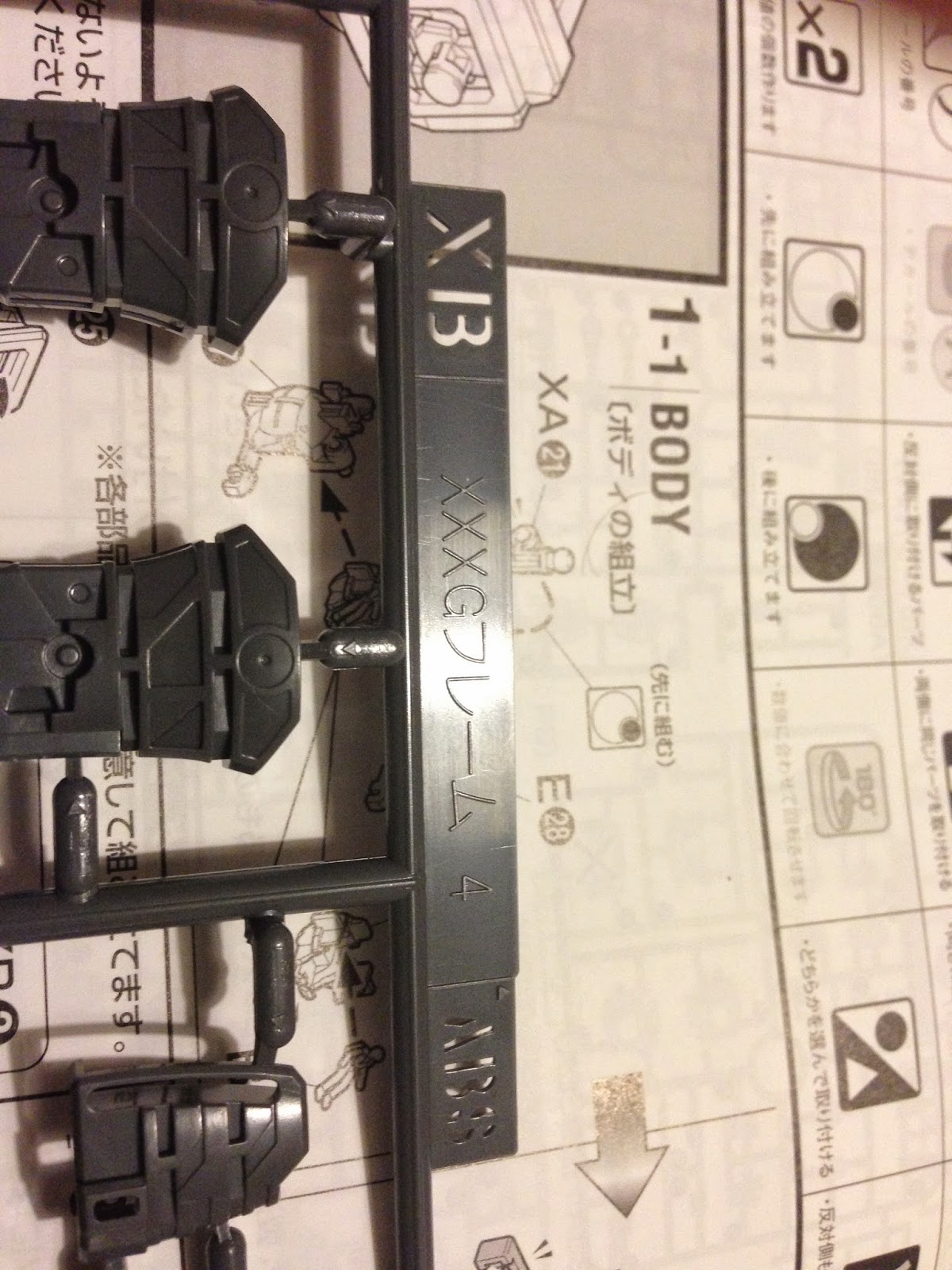 The instructions are amazing.  They're in Japanese, but the images are clear enough that anyone who has done even minimal modelling in the past will easily be able to understand them.  The assembly part is in black and white, but there are what appear to be hobby articles in the front and back.  I can't read them...  but I guess the pictures are pretty! 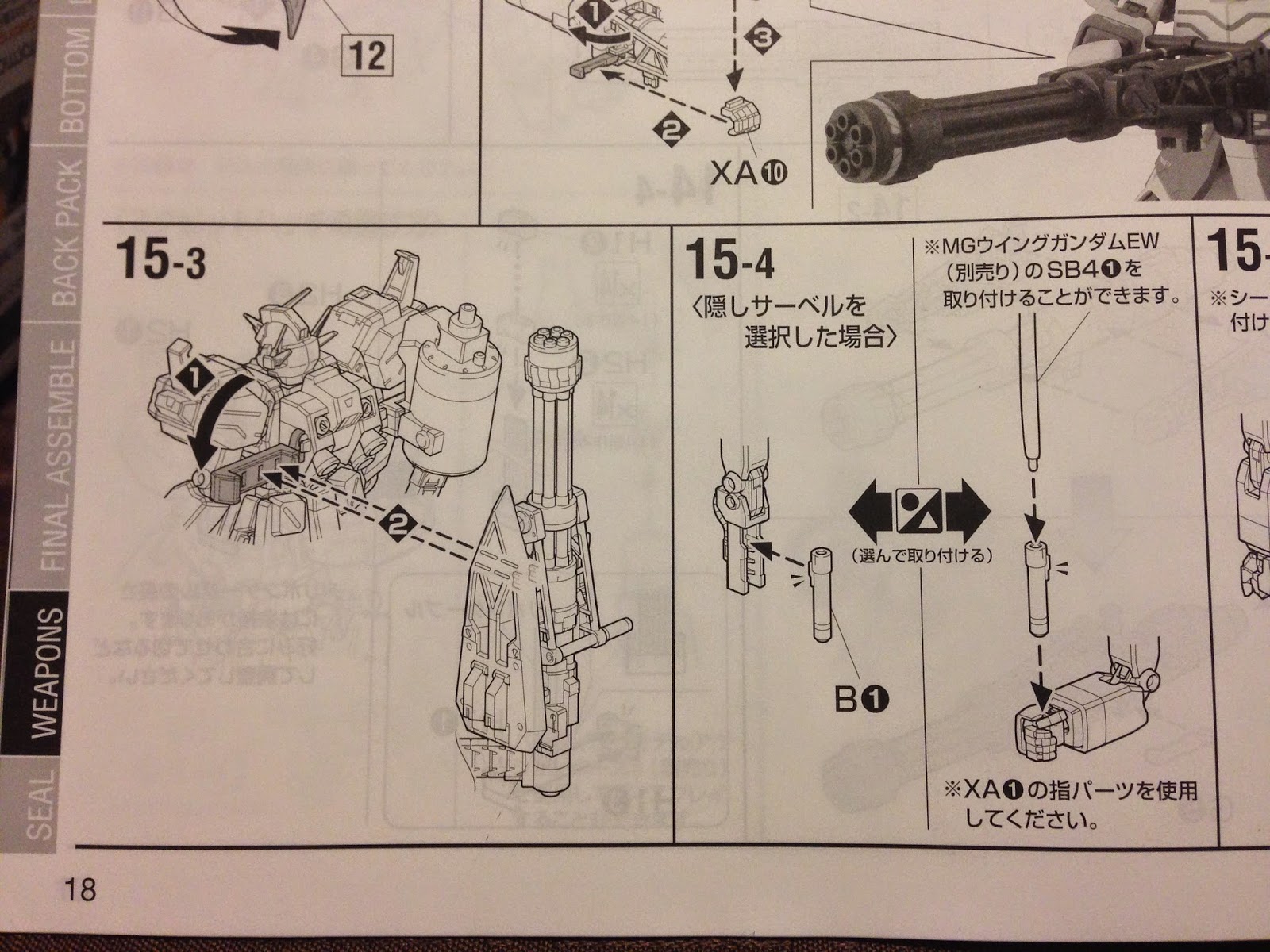 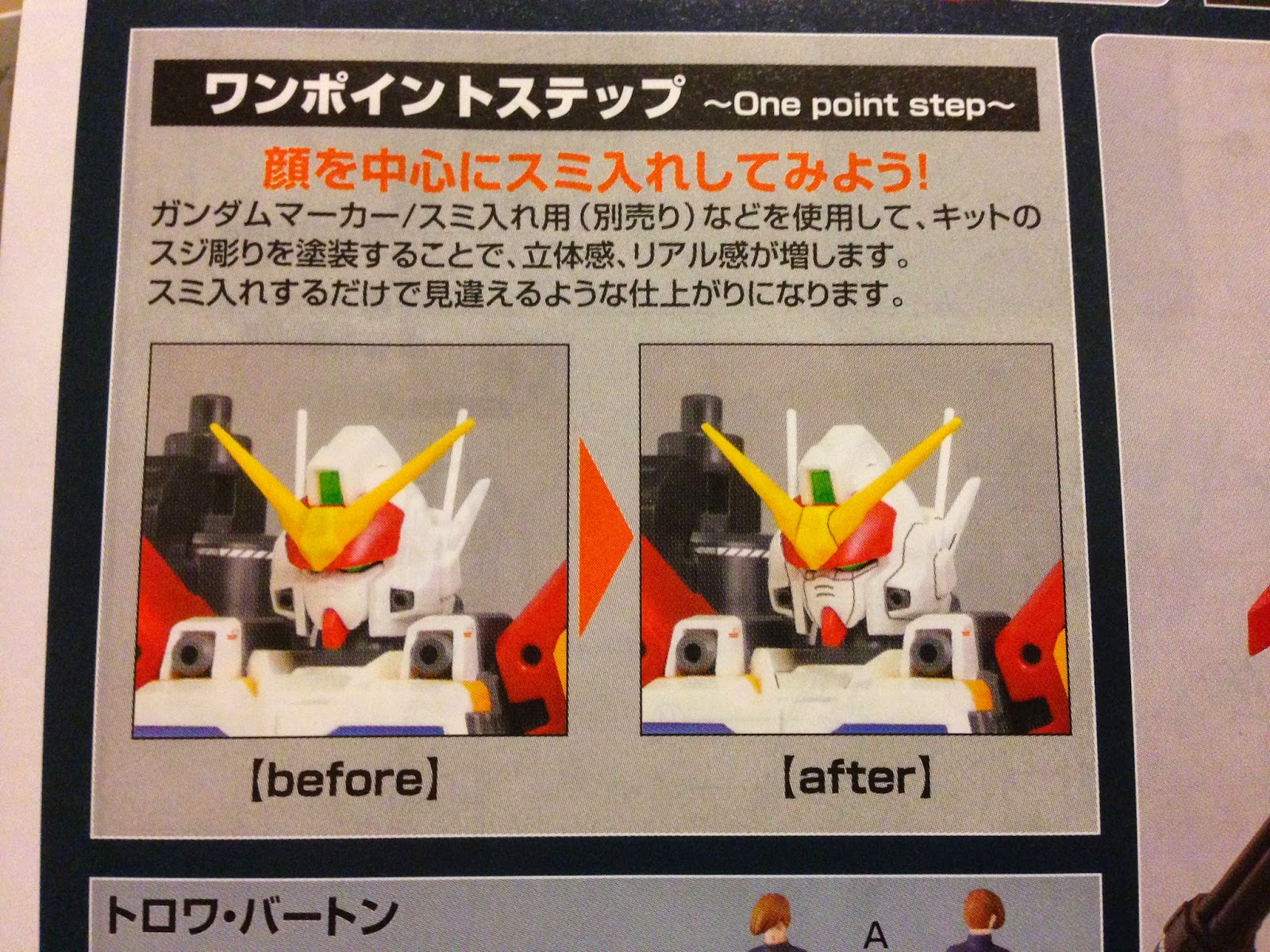 I think the pic above is telling me that if I get a fine point marker, I can draw slim black lines in the cracks and make the model look cooler.  At least, that's my guess based on the before and after photos.  Also, it's funny that before and after are in English, but almost everything else is in Japanese.

Time to get started.  I've only put together the main torso bit and the head so far.  This thing doesn't even need glue.

This bears repeating.  NO GLUE IS REQUIRED.  This entire thing is snap fit AND pose-able.  It's so beautiful I want to cry. 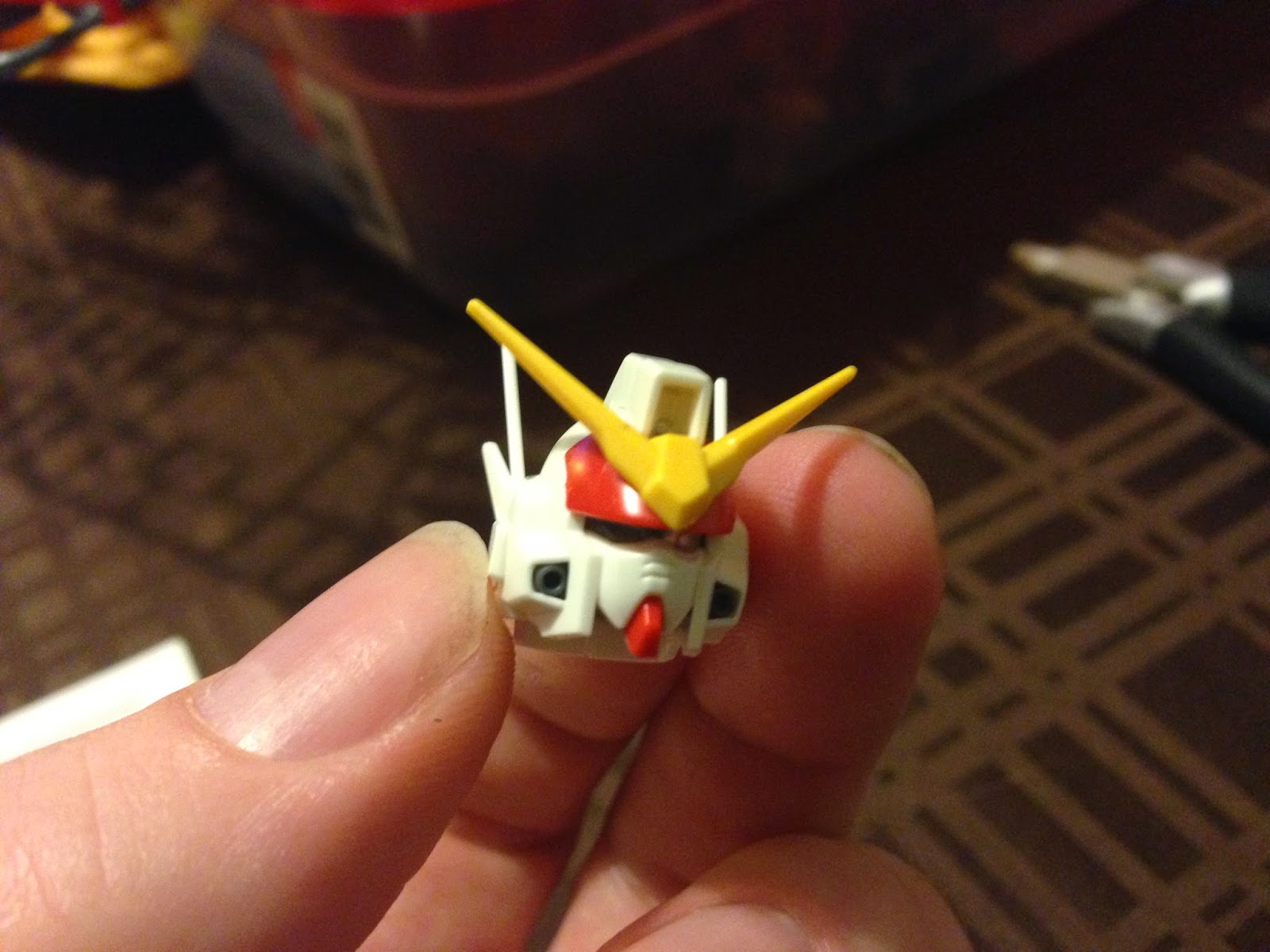 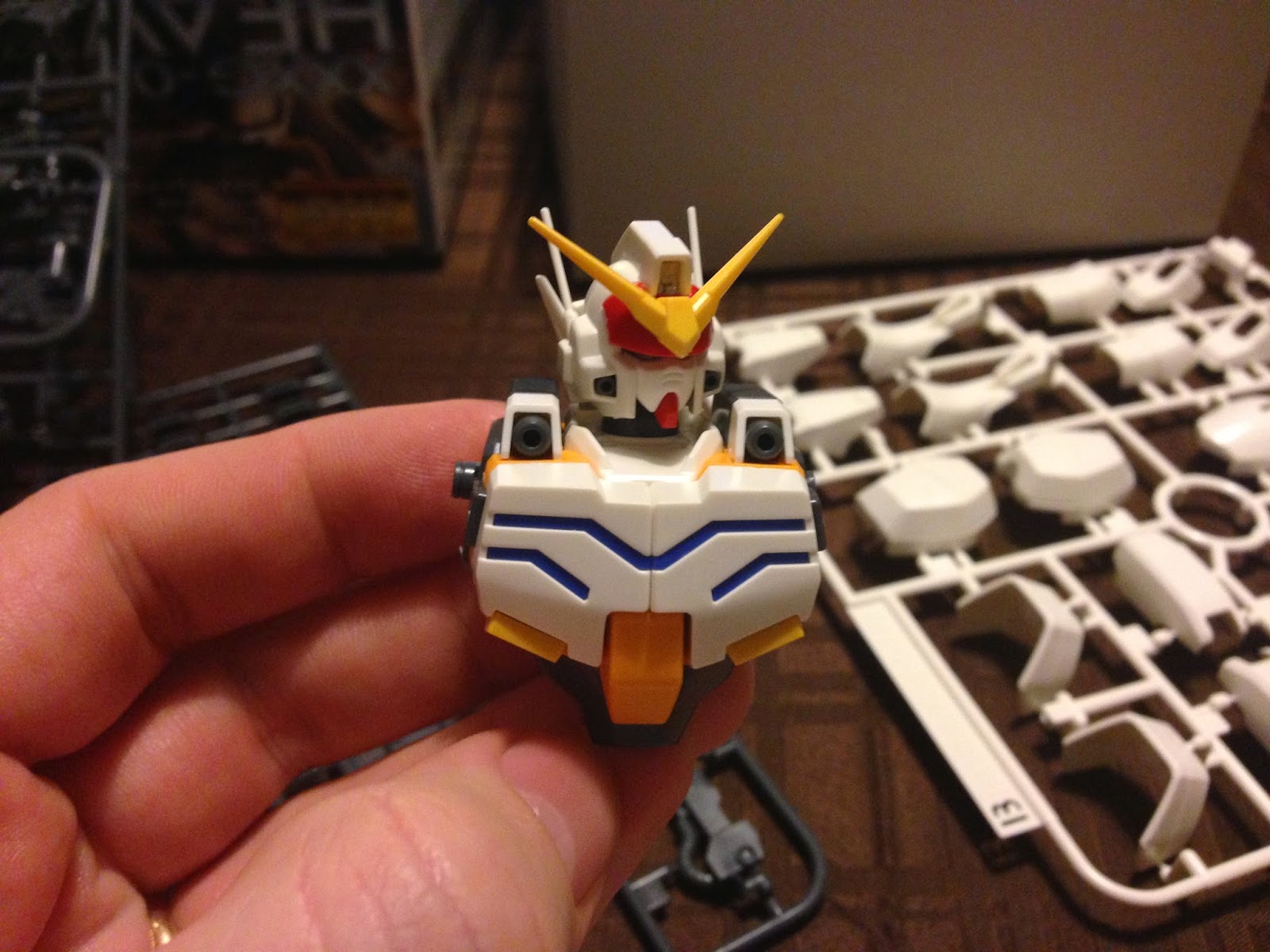 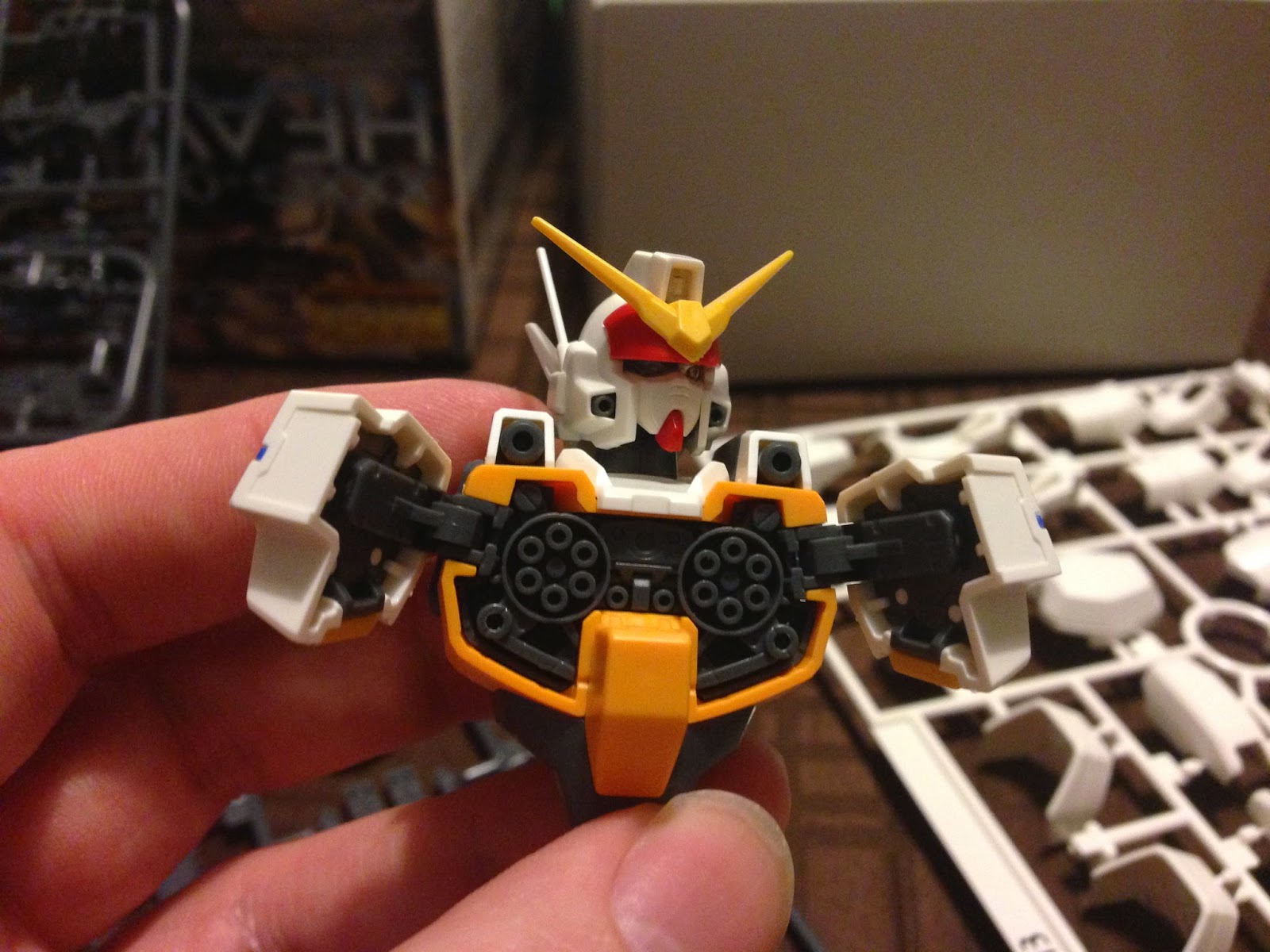 The multi-colored pieces go together with almost no effort at all.  The torso bit (with built-in chest miniguns!) is 50 pieces by itself.  The head is another 11 or so.  I'm not even close to being done.  This thing is so complex, but is almost trivial to put together.

And there is a little dude inside!!!  It's tough to get a solid picture, but the yellow thing between the miniguns swivels down and the dude is inside the chest cavity. 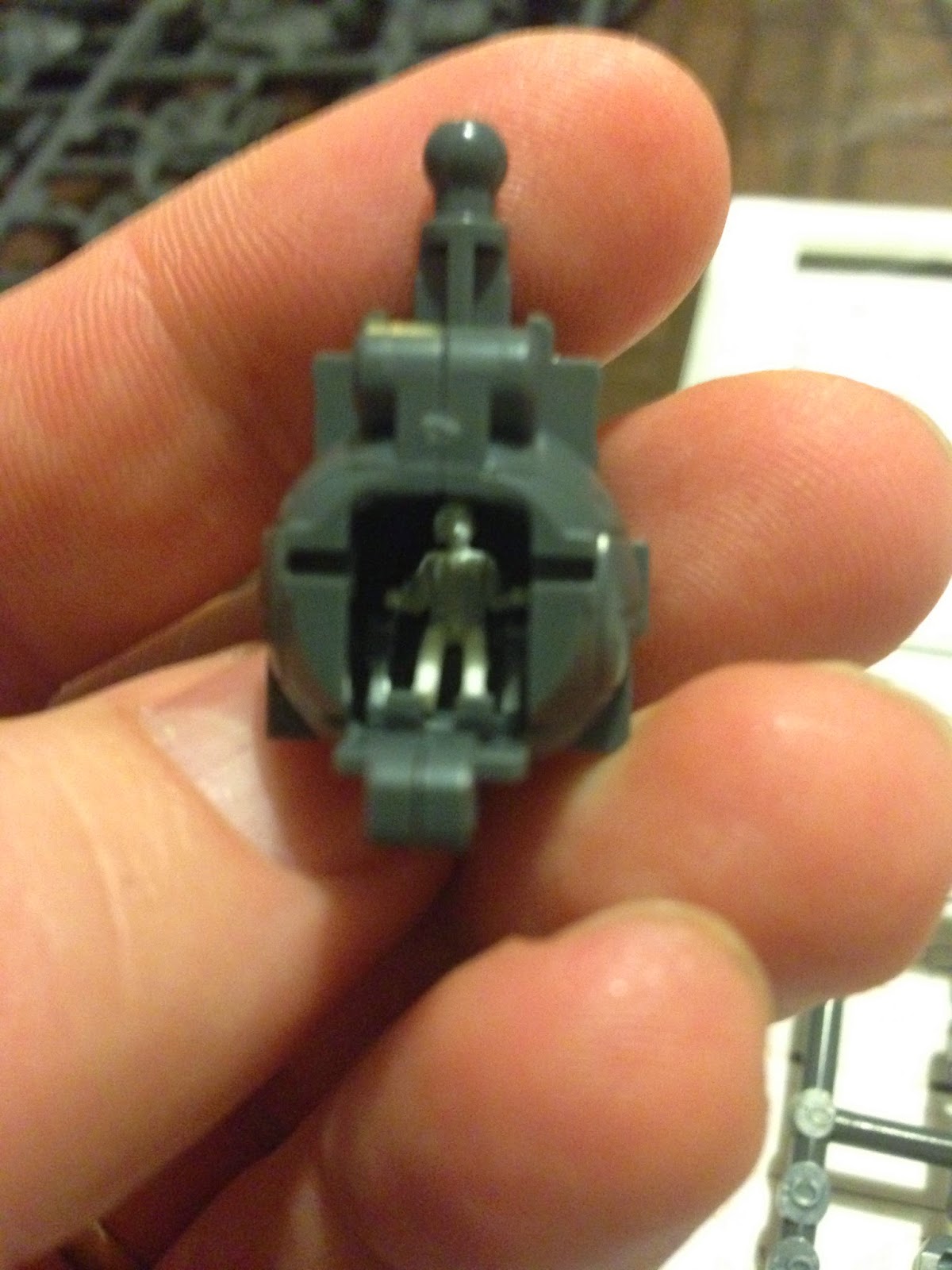 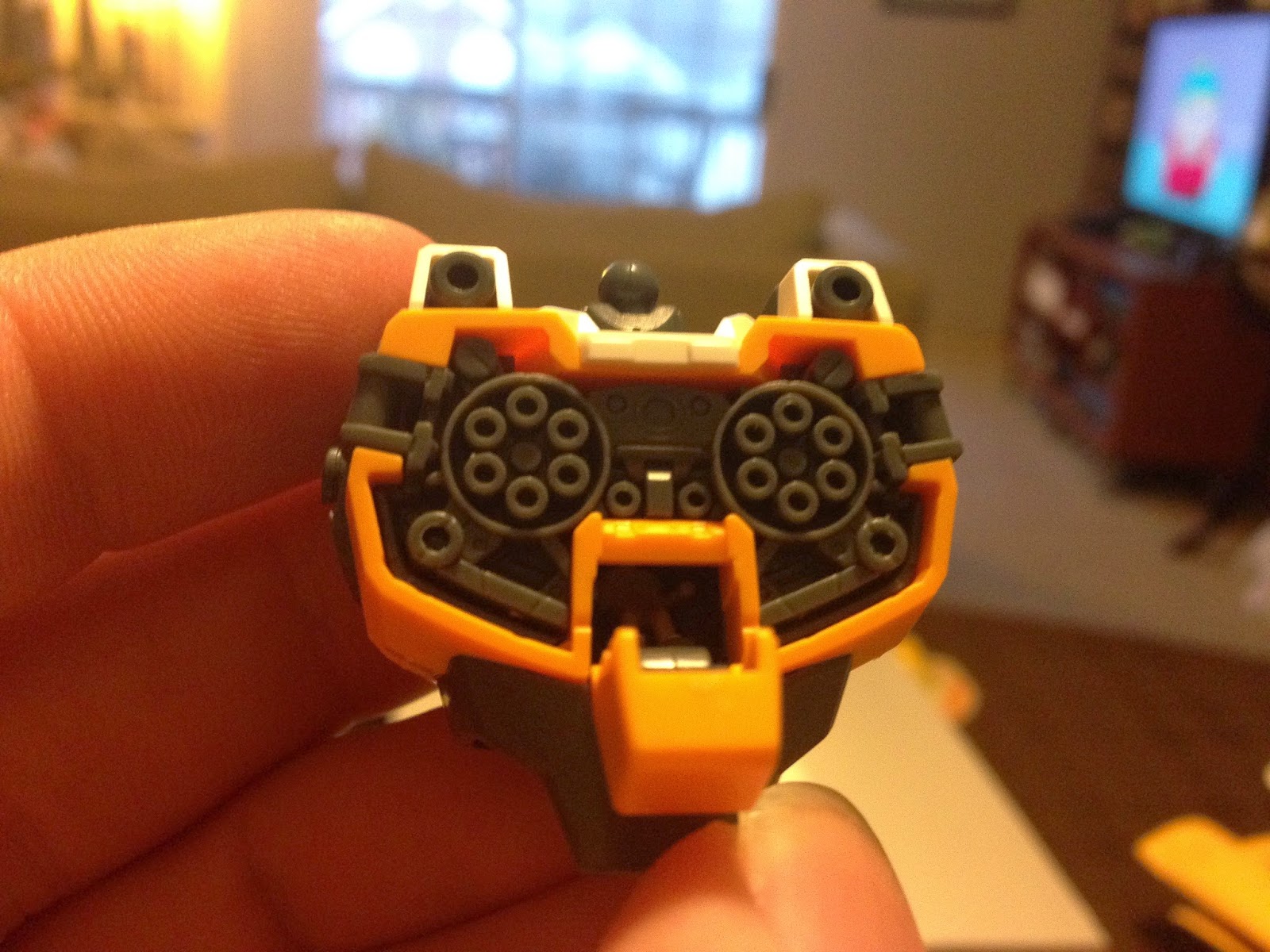 I'm not going to stop building, painting and playing with my 40k and other company gaming models, but I can totally see myself picking one of these things up every so often.

Again...  This thing is a buck or two cheaper than a Space Marine Dreadnought, doesn't require glue, is fully pose-able and comes effectively pre-painted (although can be repainted).  This thing makes Games Workshop models look like Ford Model T's in comparison.

I would love to see Games Workshop mode in the same direction, but I don't think that'll ever happen.  Imagine being able to snap fit together an army and have it come in a default color scheme.  Imagine that the larger models are pose-able and that things like Rhinos have working doors and translucent glass plates with models that can be seen on the inside.  It's like an impossible dream

IN TOTALLY OTHER NEWS...

1.  By the time you're reading this, DakkaDakka's Maelstrom's Edge Kickstarter should be up and running.  They previewed some terrain sprues today that looked pretty sweet and said they're only going to require $45k to unlock them as a stretch goal.  Can't wait.

2.  Leadbelcher Spray is still back-ordered.  Grumble grumble.  If I'm able to, I'll run to Showcase Comics in Swarthmore, PA this weekend and pick up some Army Painter spray cans.  I hear good things, but have never used that brand.

3.  My good buddy's birthday is rapidly approaching.  We're going to Brick Fest, a LEGO festical, in Philadephia on Saturday.  I'm hoping to take some cool pictures and get ideas for possible LEGO usage in gaming.  I've seen cool things done with impromptu terrain or using LEGO bricks as a framework for a tank or something else.