So, FFG announced Wave III of Armada, and the ships are pretty surprising. Wave three does not offer players new ships of the line. Instead, the wave consists of two ships (one imperial and one rebel) with a new game mechanic “Flotillas.” Here is the card as presented on their site: 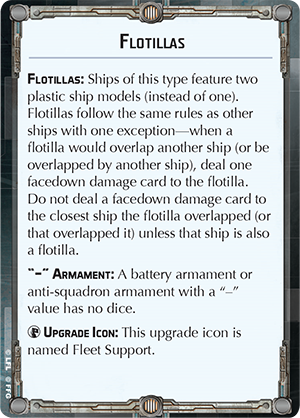 While some people are a little salty about the small offering. I think this little wave will bring big change to the game.

If you’re like me, you’ve spent a lot of time theory crafting Armada lists to include one extra ship. Not because the extra ship gives you a combat advantage, but simply because you want/need the extra activation. These tweaks are most notable in duel Imperial Class Star Destroyer lists, anything with an MC80, or a handful of Gups. The goal is usually to hit four activations, or keep the current meta average of three activations per turn.

Before I go any further, if you usually play three ships in Armada, I would encourage you play a test game with five or more ships. The whole galaxy changes. You can force your opponent’s hand in ways you never imagined. The dynamic between first player and second players shifts wildly. And you really start to see some of the complexities the game has to offer in terms of list building and game play.

Playing the activation game is nothing new. There are a lot of lists out there with an extra ship tossed into the list to help everyone else do their job. But 40-ish is a steep tax to pay in exchange for a predominantly blank card. Adding a cheap CR-90 to an Ackbar Guppie list, isn’t a significant increase in firepower, but it does help when you’re trying to force an enemy ship into range. But I’m most excited for the four activation duel Imperial Star Destroyer list; a list that struggles to fit in three activations the current meta without significant sacrifices.

Usually, cheap activations are taken in the form of corvettes. Now, FFG has promised an even cheaper ship at an even lower points cost than the two corvettes. Even better is these ships are not expected to participate in combat the same way the corvettes do, but instead offer a range of buffs for your other ships or squadrons. 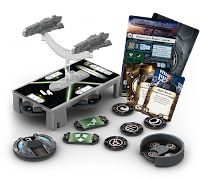 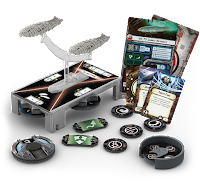 The most impressive thing FFG displayed was a serious amount of foresight when they took away flotillas’ ability to ram, which means we won’t see 10-15 flotillas on the table, because they won’t do anything other than die. Additionally, the blank side batteries for the Rebels also means no dice pools, which means no Ackbar bonus.

These cautionary moves preserve the roles of existing ships. I appreciate any new release that doesn’t force an existing unit onto the shelf. So, lists that depend on damage from bumper cars lists will remain unchanged. I suspect that certain carrier lists will stay the same from a large scale activation standpoint.

Overall first impression, Wave III is all about offering players a low points cost way to tailor their lists. These ships don’t replace anything, but offer a new and seemingly better way to customize existing lists. For example, Toryn Farr, depicted in the press release found here, will shift my Dodonna’s Blues list (6 CR-90B Corvettes with SW-7 Ion Cannons and a mess of YT-2400s) into an even higher gear by allowing mass re-rolls for blue dice. I don’t feel the list is super competitive now, but it’s very fun to play. A re-roll bubble in that list will might push it over the edge and make it a top-tier competitive list. Likewise, repair crews upgrade is a steal at four points to extend the life of bigger and badder ships while adding activations. Finally, the Bomber Command Center will help out Rhymer Balls and the Rebel’s A New Hope strategies.