I picked up a copy of the General's Handbook for Warhammer Age of Sigmar last week.  I think this book is, without a doubt, a direct response to community outcry about the lack of points, and subsequently, balance in Age of Sigmar.  This looks like a pretty solid fix. 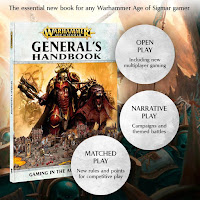 The book provides three different styles of play.  The first is Open Play, which is basically the same old Age of Sigmar that lots of people don't like.  The second is Narrative Play.  Narrative Play requires that you build a warband and play a series of games with your warband growing and becoming stronger over time.  It seems like a pretty solid way to play with regular friends, but a horrible way to play random games in a gaming store.  The last way is Matched Play.

Matched Play is Age of Sigmar with points and a few modification to fix some of the more glaring issues.  Spell casting has changed so that you may only attempt one casting of each spell per turn, regardless of the number of Wizards you have.  Summoning was nerfed hard, but that was needed.  Lastly, a roll of 1 always fails.  In the core rules, it's possible to stack effects and get guaranteed successes where the roll doesn't really matter.

My friends and I decided to give this a shot.  We'll be starting with a 1,000 point level, which requires 2+ Battleline units (basically Core choices) and allows 1-4 Leader models.  There are also limits on Behemoths and Artiller units. I'll be playing Stormcast Eternals since that's pretty much all I own right now.  I purged a bunch of my stuff when it seemed that Age of Sigmar would never be playable. 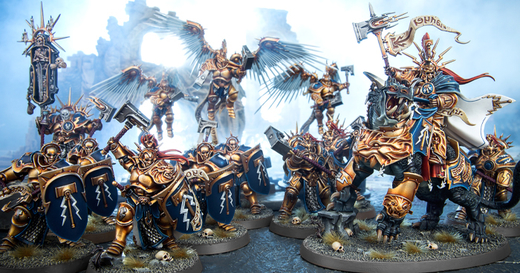 That's a total of 28 models.  Granted, the Stormcast Eternals are all 2 or more wound models, but I think this gives a good indication that Matched Play isn't necessarily going to involve hundreds of models.  Well, unless you play Grots.  This is a 980 point Grot list...