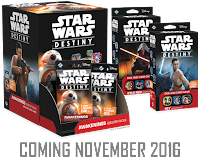 Given that Gen Con 2016 just happened, we're seeing tons of exciting new game announcements.  One that I'm particularly excited for is Star Wars Destiny.  Just like yesterday's post about RuneWars, this game is being put out by Fantasy Flight Games.  They really have their heads on right over there.

This is going to be a collectable card/dice game.  What does that mean?  Well, we've already seen a bunch of regular FFG fans expressing, let's call it "mild agitation" online.  FFG produces a number of LCGs or Living Card Games.  With an LCG, new expansions come out regularly, but there are no randomized packs.  If a new set comes out, you go down to the shop, spend $15 or so and get a full play set of all the new cards.  Destiny isn't an LCG.  It's a CCG.  If you want a specific card, you'll be buying lots of these... 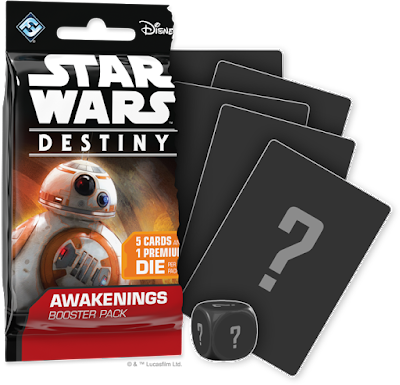 I don't mind CCGs.  I used to be a big fan of Magic the Gathering about 10-15 years ago.  I finally gave up on that because it's cost prohibitive.  The MtG folks figured out how to completely invalidate the majority of your collection every year or so by maintaining a stranglehold on the tournament scene and dictating that only recent sets are legal for play.  I just don't see FFG doing that.  X-Wing is on Wave 10 right now and every model ever made is still legal for play. 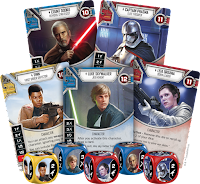 But you want to know more about the game, right?  Well, the game is a duel between 2-3 Characters on each side.  I get the feeling that most battles will feature two Characters per side, but I think that if you pick weaker Characters, you can fit up to three.

The rare and super rare cards each come with a custom die, matched to the card.  The commons and uncommons don't.  As you play, you're able to activate a Character, or whatever card has a die attached to it, to roll dice.  Depending on the outcome of the dice, you'll have different options for that round of the game.  It looks like the dice "reset" back to their cards after being used and also at the end of each round of play.

In the below image, you can see an example of Luke Skywalker with one attached upgrade activating and rolling dice. 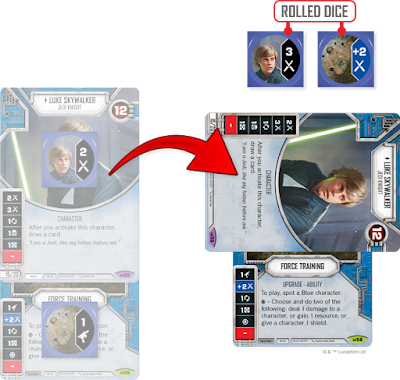 In the above example, his core die rolled 3 melee damage and his force training upgrade gave a +2.  What this means is that later in the round, the player can choose to make a melee attack that will deal five damage.

If you're interested, here is a full play through video that really shows off the game.  It's fairly long, but the two players are being given a demo.  I think in a real game situation, it would be quite quick.

I'm excited and can't wait for this.  There are two starter decks that will run $14.99 each, with booster packs costing $2.99.  I expect that I'll see more reviews before the game is released, but I'm anticipating buying into this.  It looks like a really fun game without the ridiculous expense associated with Magic the Gathering.