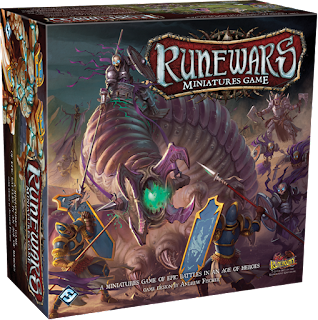 Fantasy Flight Games is getting into the non-board game based tabletop miniatures business.  Consider me extremely interested.  Up until this point, I've predominantly been a Games Workshop customer when it comes to table top gaming.  Lately, I've been dabbling in Privateer Press's offerings, but I'm not sold yet.  Warhammer Fantasy sort of died when GW released Age of Sigmar and Warhammer 40k has been slowly suffocating under the weight of its complex and ponderous rule set.

I'd say that Fantasy Flight Games has never really made a table top war game before, but that's not entirely true.  Star Wars Armada and Star Wars X-Wing are both basically table top war games, but with capital ships and star fighters instead of skeletons and knights.

RuneWars appears to be be a skeletons and knights version of Armada or X-Wing.  As you can see below, there are many of the hallmarks you'd expect from an FFG game.  You have lots of unit and upgrade cards, command dials and movement templates. 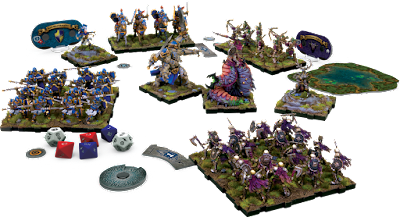 Let's have a look at some of the components in a little more detail... 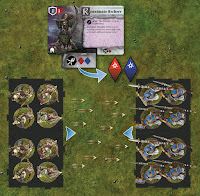 Each unit comes with a unit card, showing the stats and normal attacks.  These stats show melee and ranged attack dice as well as any abilities the unit might have.  You can see in the below image that the Reanimate (Skeleton) Archers roll both red and blue dice when making a ranged attack, but only roll a single red when making a melee attack.  Assuming this game is like X-Wing and Armada, the color of the die determines the likelihood of a given outcome.  As an example, in Armada, the black dice tend to deal a lot of damage, but can only be used at short range.  I'm assuming we'll see a similar mechanic with the different dice colors.

Another similarity between Armada, X-Wing and RuneWars is the use of command dials to determine your units actions.  Presumably, at the start of each round, you'll pick your units' actions on the corresponding command dials.  The left command dial is your unit's action for the round.  The right dial is a modifier.  Each action has a related number.  This is the initiative number.  As you can see in the image to the left, the Reanimate Archers have a number of optional actions.  They have relatively high initiative numbers for their forward movement actions, while the knights have lower numbers.  This does a good job of representing that skeletons are slow and shambling while knights are pretty good at a forced march.

BUT...  a miniatures game is nothing if the miniatures are garbage.  How do these stack up to, say a Games Workshop offering?  Sure, we have lots of pretty pictures... 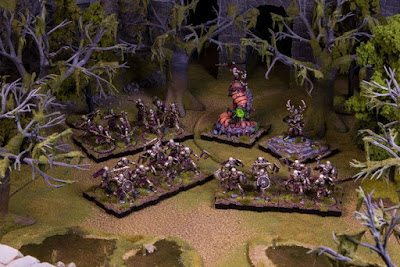 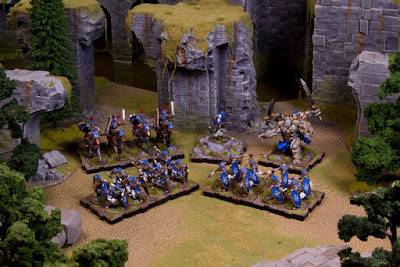 ...but it's hard to get a feel for actual model quality when all you have to go on are studio photos.  Well, we're in luck.  The leader of the undead faction appears to be Ardus Ix'Erebus.  I know this because he's a bad guy character in Descent 2e: Journeys in the Dark, a board game that is set in the same shared univers...  the world of Terrinoth.  The sculpt looks identical to the one in the pictures above, so its very reasonable to assume that the new RuneWars miniatures will be the same scale and aesthetic as the newer Descent ones.  Given this assumption, I took a photo of some recent Descent minis alongside Captain PointyFinger of the Soul Drinkers Chapter. 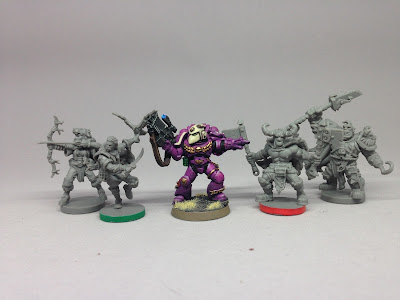 As you can see, the scale is similar to a standard Space Marine.  Some of the models are taller and some are shorter.  This is nice to see, given that an 8' tall Space Marine is the same height as a 6' tall Guardsman in the 40k line.  The details is pretty solid too. 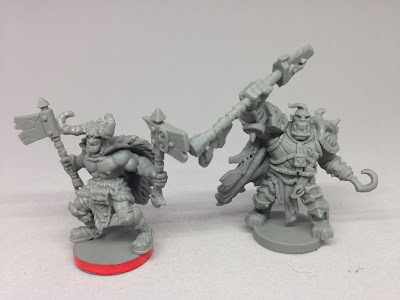 All in all, I'm very excited about this upcoming game.  It's due to release sometime in the first quarter of 2017, so we have potentially six to eight months of waiting ahead of us.  I really hate that this hobby involves so much waiting for new product to come out, but I guarantee that you'll be reading a review a day or two after release happens.