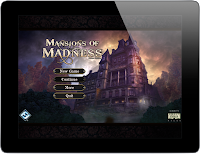 A friend came over and we gave Mansions of Madness 2nd Edition a try.  As my hopefully not too subtle hint to the left indicates, this new edition is controlled by an app.  It's available in a number of formats, but we decided to use my laptop to control the game.  In the prior edition, a human player would have controlled the monsters and the various bad things that happen to the investigators.
It was a resounding success.  This app controlled board game is something I've tried before with the Descent 2nd Edition game.  In that instance, the app was sort of added after the fact and isn't integrated 100%.  There are a ton of components that never get used and it's not nearly as polished as it could be.  This game is fully integrated and it shows.  It's a much better presentation than Descent.

After you choose a scenario, the game randomly generates a mansion for you to explore.  The map is revealed gradually as you open doors and search rooms for clues.  It was a pretty solid mechanic and really add to the mystery.  More complex scenarios will have much larger maps. 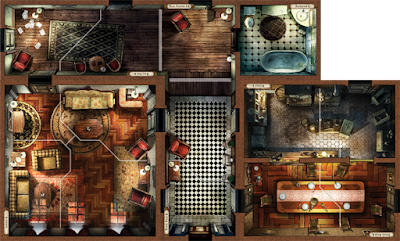 The one thing I didn't like are the monsters.  Well, more specifically, I didn't like the bases.  Each monster has a square monster token.  This token slots into a ridiculously cumbersome base which simultaneously covers up the token artwork AND a pretty large amount of mansion real estate.  I will be doing something about this.  You'll likely be seeing what tomorrow or Friday. 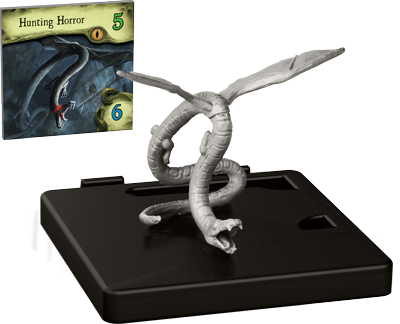 This game gets a solid A+.