So, I went to the Showcase Comics Game Swap this past weekend in Swarthmore, PA.  I got some absolutely fantastic deals.  I took pics of everything just now so you can see what I'll be working on over the months to come.

First up, I got this Shield Bag from Battlefoam for a measly 5 USD.  It didn't have any foam, but is otherwise in perfect, unused condition.  I have TONS of GW sized foam, which is what this takes.  What a deal! 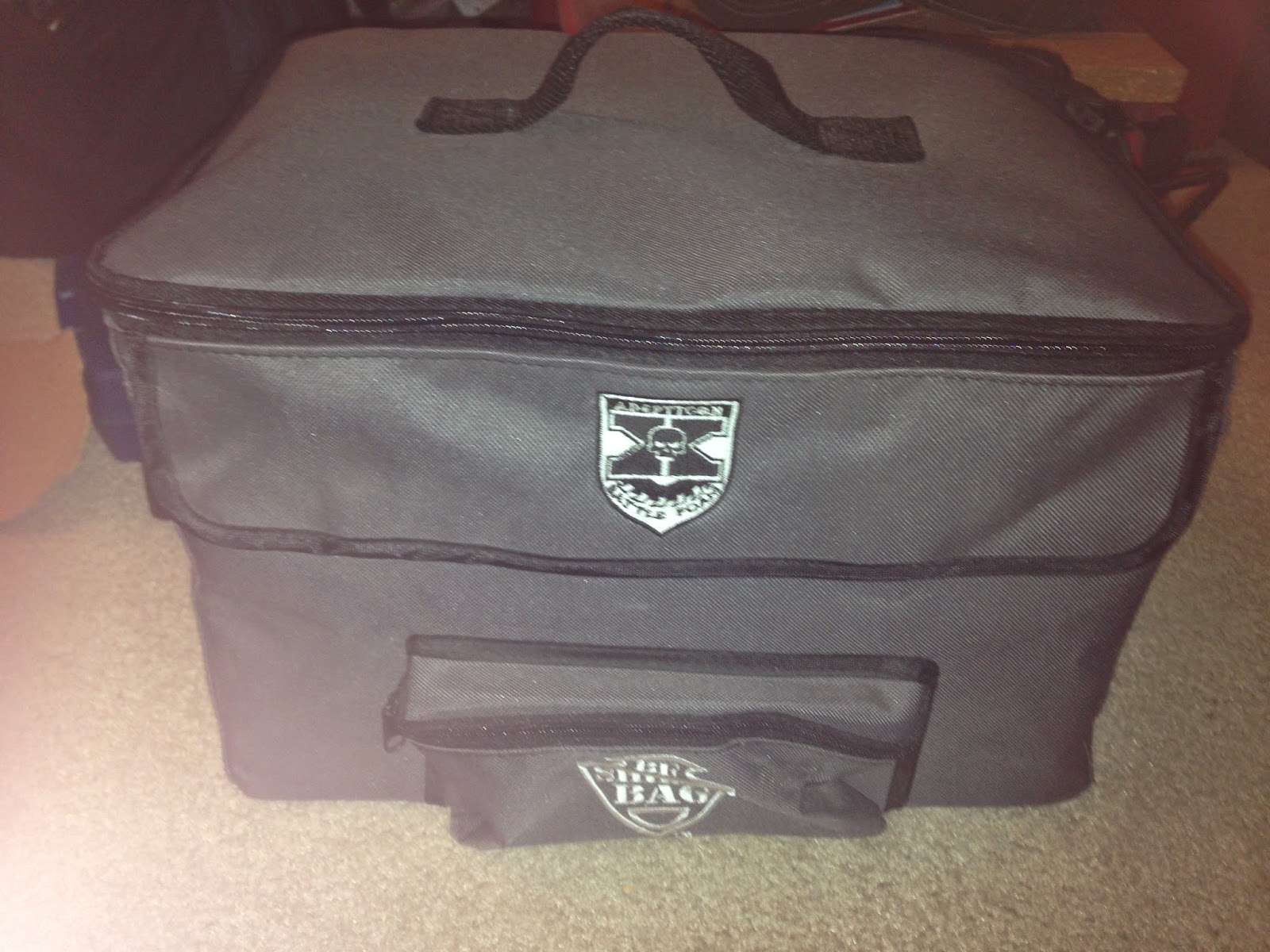 Next up are these four blisters for my Necrons army.  I checked out all the casts and they look perfect.  I might end up replacing the weapons with plastic replacements from a Praetorians kit, but that's easy enough. 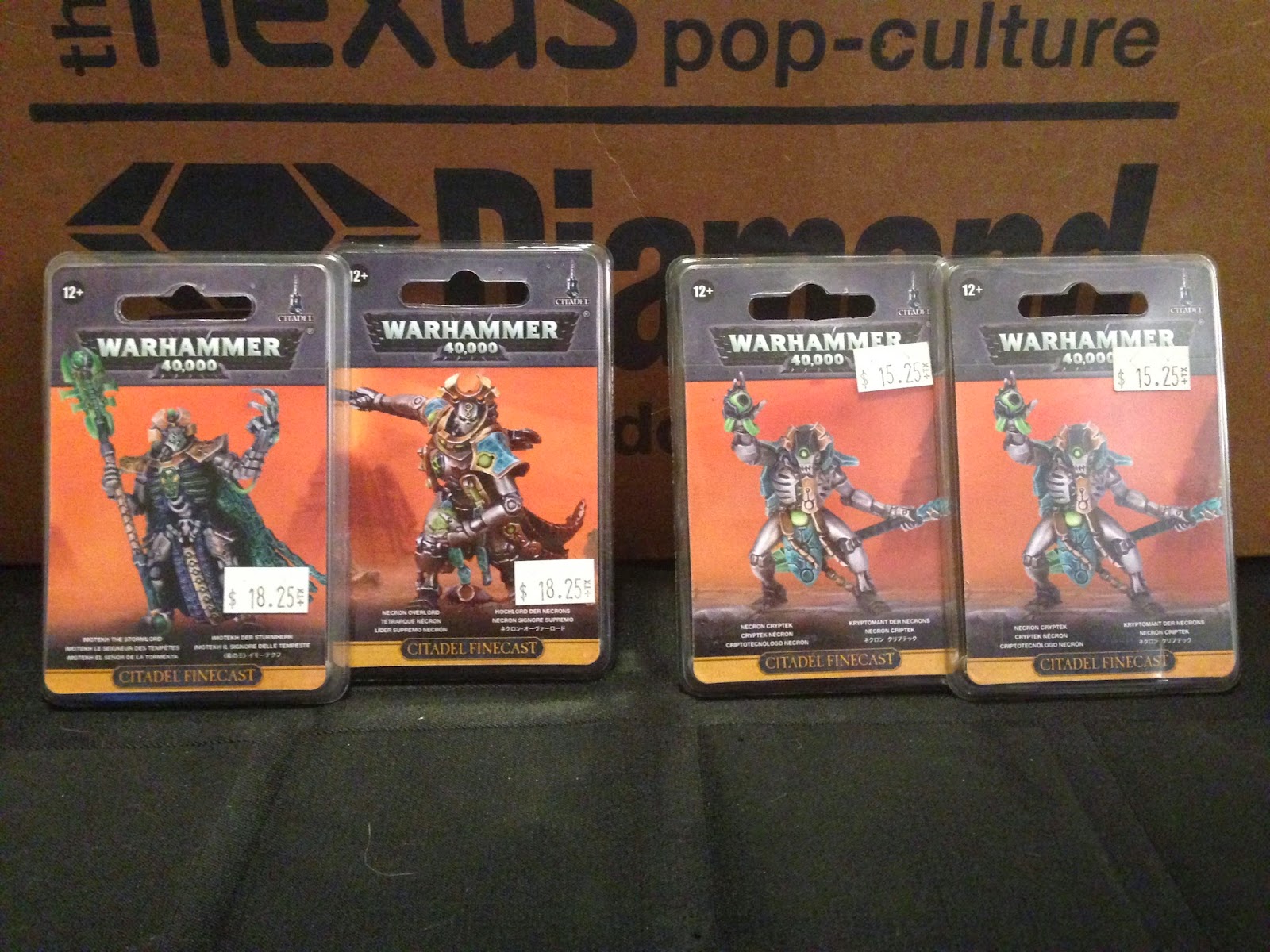 These guys will end up seeing action as converted Space Marine Scout Bikes for my rough and tumble Scout Army which is currently very much WIP. 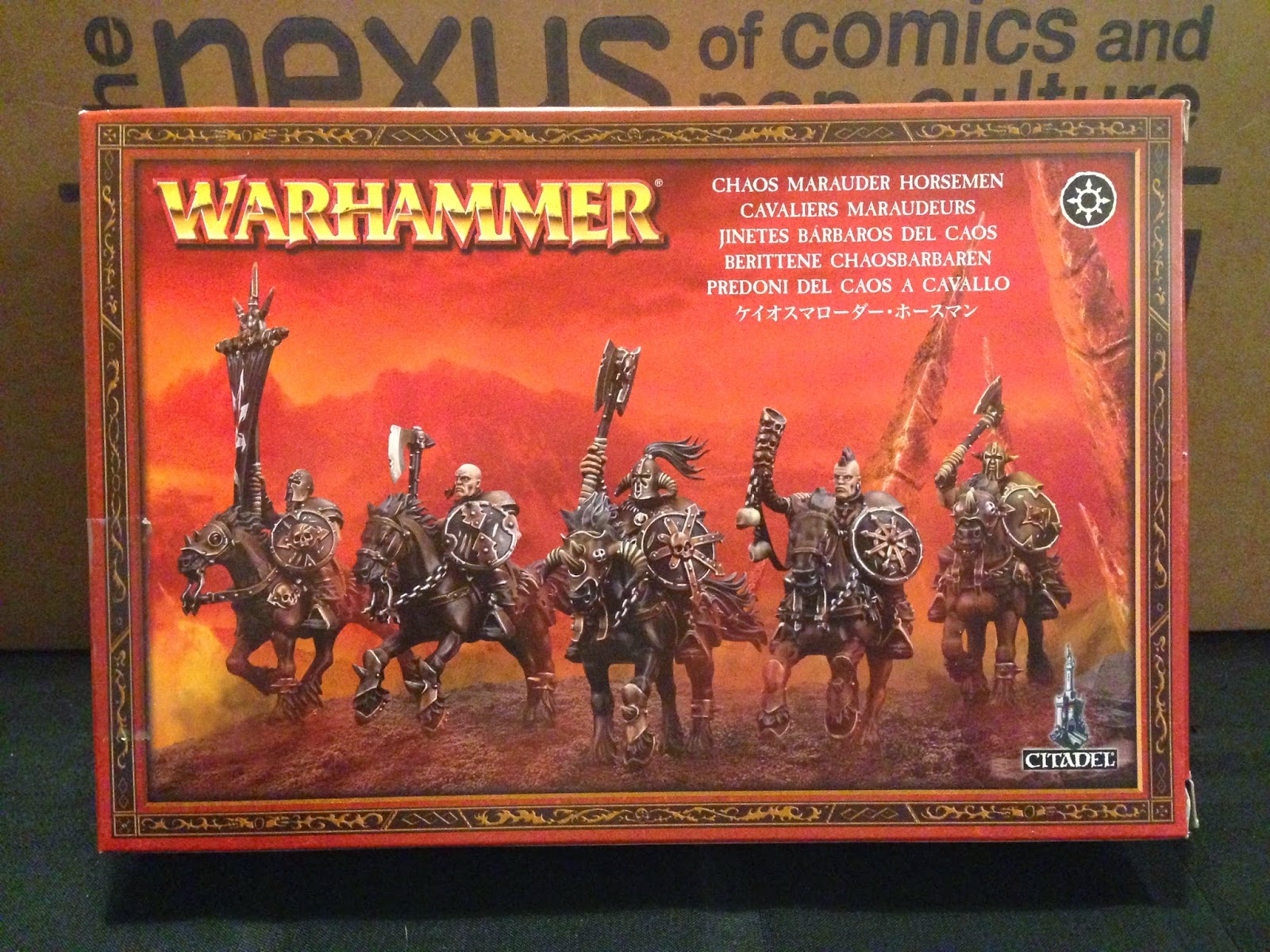 I bought this on a whim.  I think it'll probably go to my buddy who plays Ogre Kingdoms. 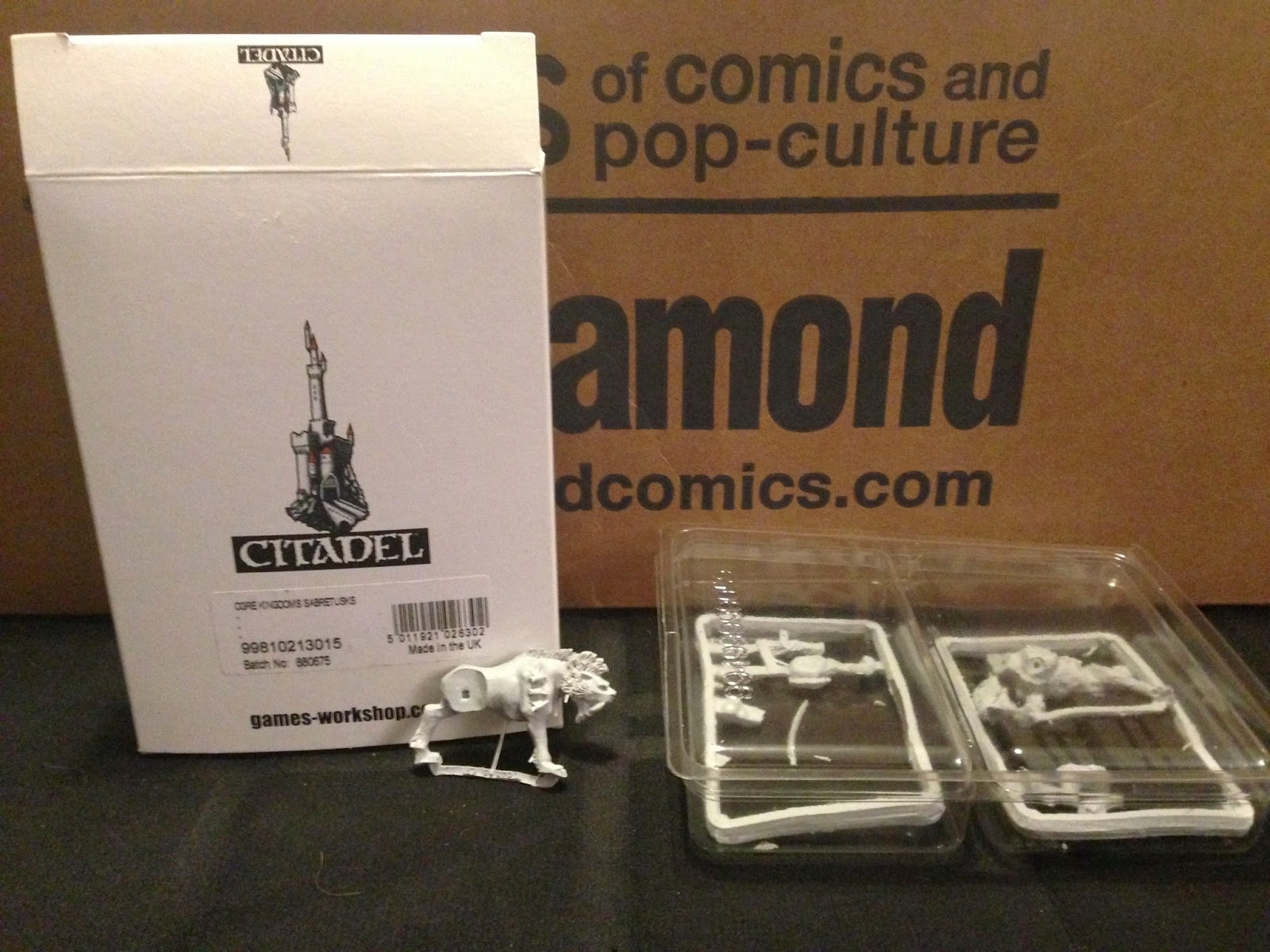 I have absolutely zero use for this, but it was only $3 and it's painted really well.  I believe it's Eltharion on Stormwing.  I have a small High Elf army I never play with, but three bucks is three bucks. 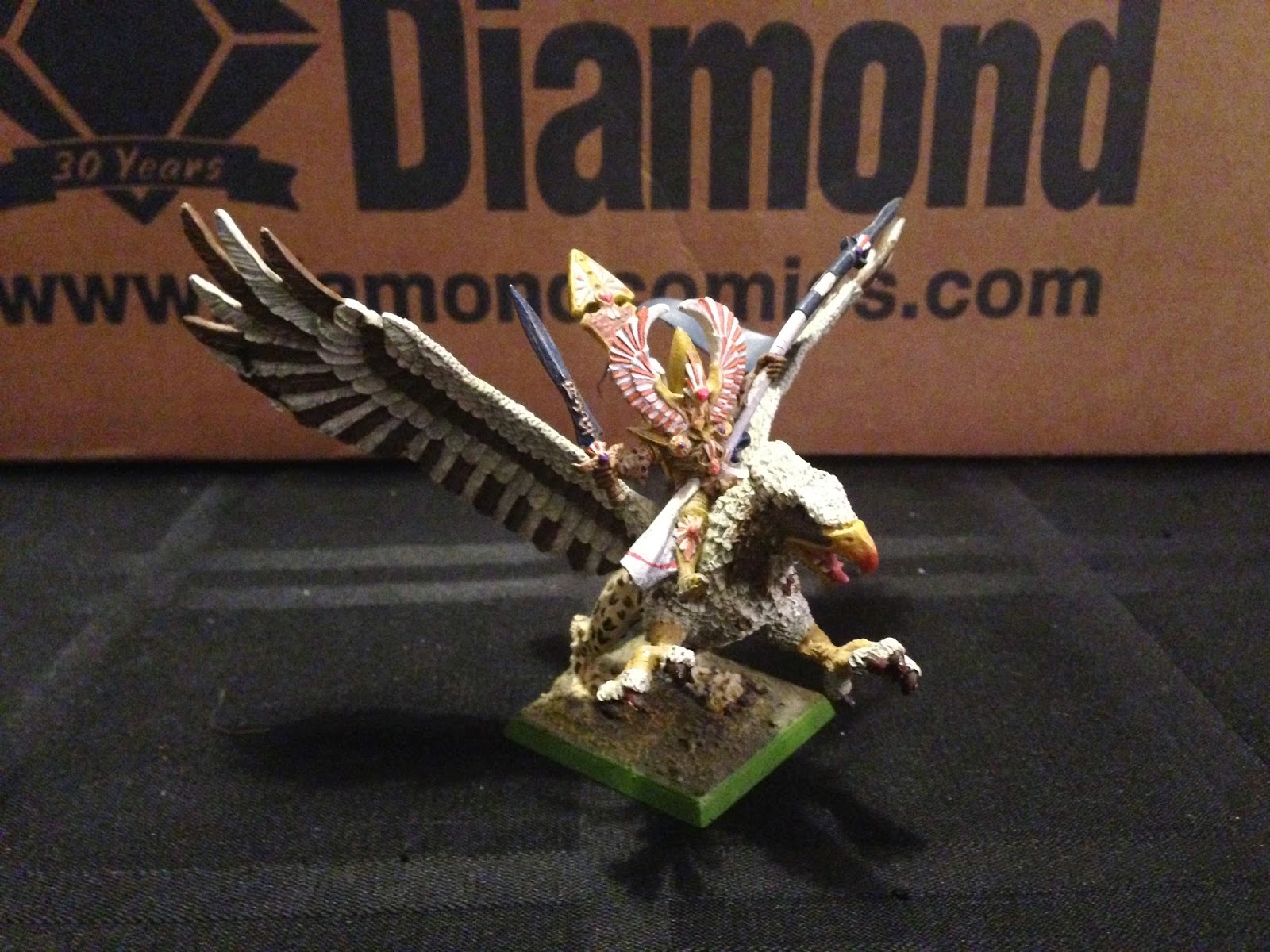 This thing just looked too ridiculous to pass up.  It was only $1 because nobody else bid on it.  I took pity on the poor ugly thing.  The head might be nice for a fancy Ork Warboss conversion or something. 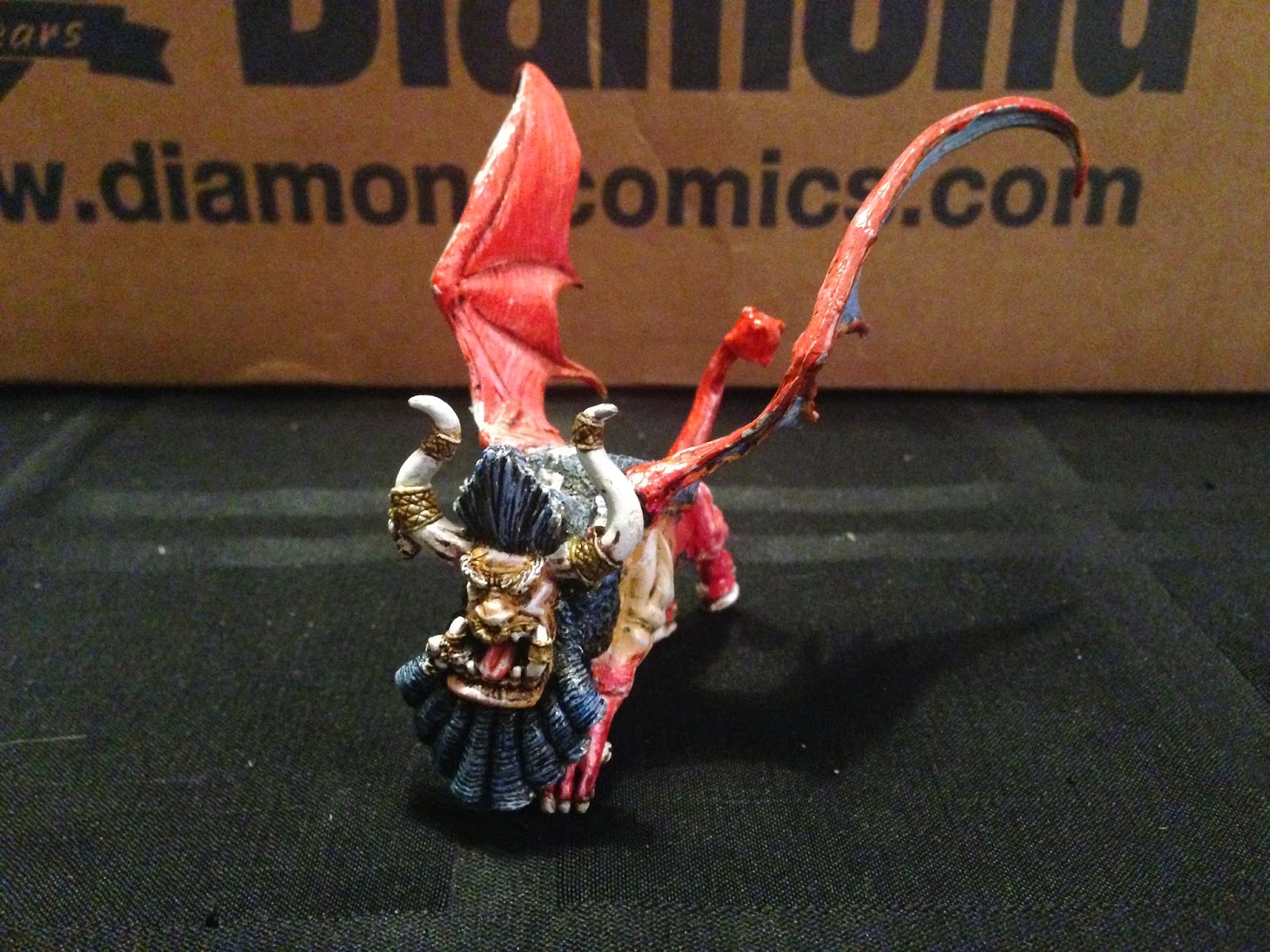 This was actually pretty cool.  $7 got me a Legion of Everblight metal starter and an extra blister.  I almost bought this recently, but didn't think it was worth 50 bucks to me.  Totally worth 7. 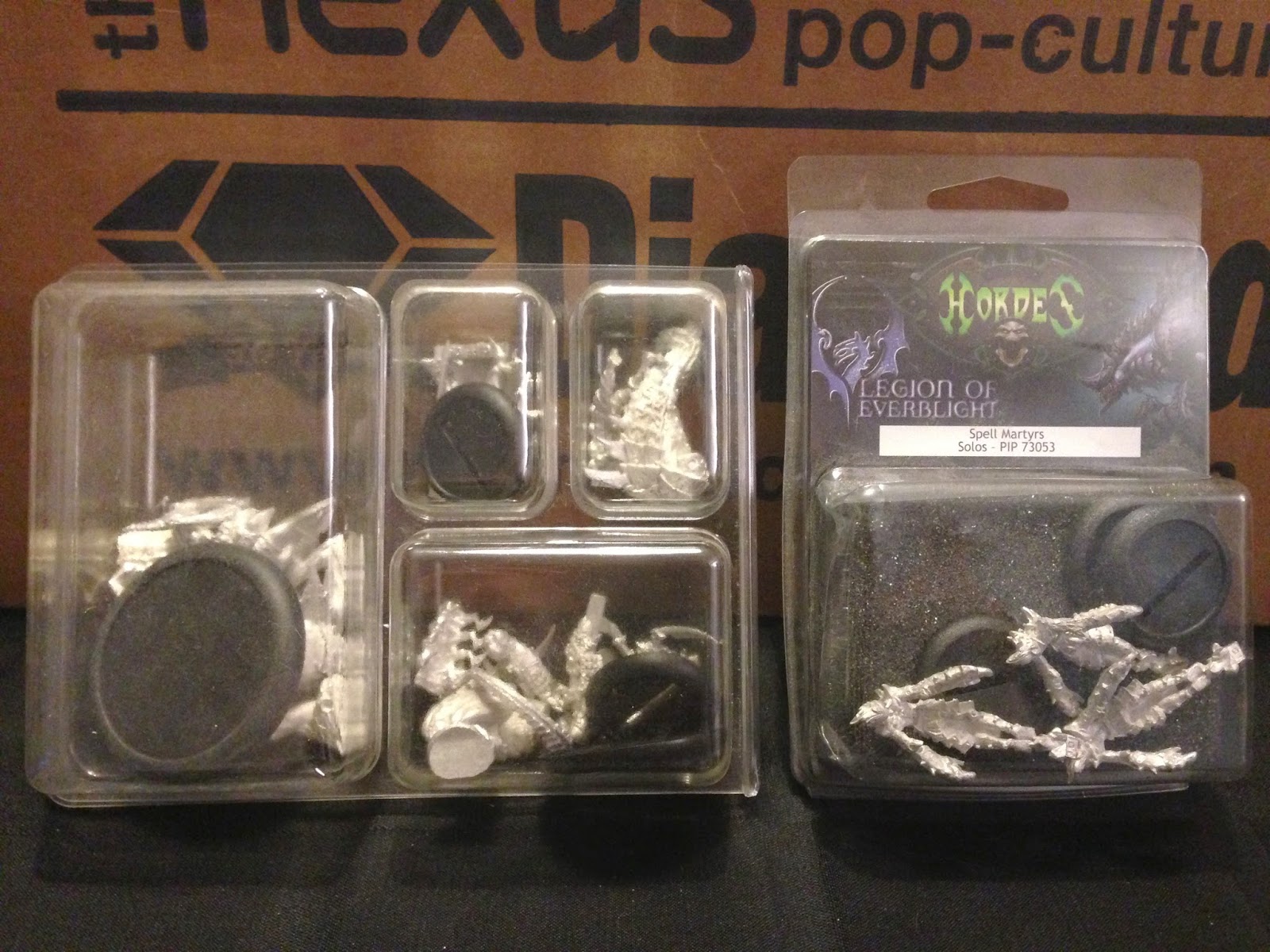 I was so excited when I saw this come up for auction.  Nobody else was interested, so I think I got it for $3.  It's 10 super old scouts from back when the Scout Sarge had power armour.  The Heavy Bolter is an over the shoulder style.  I love it.  These will definitely get painted for my Scout army. 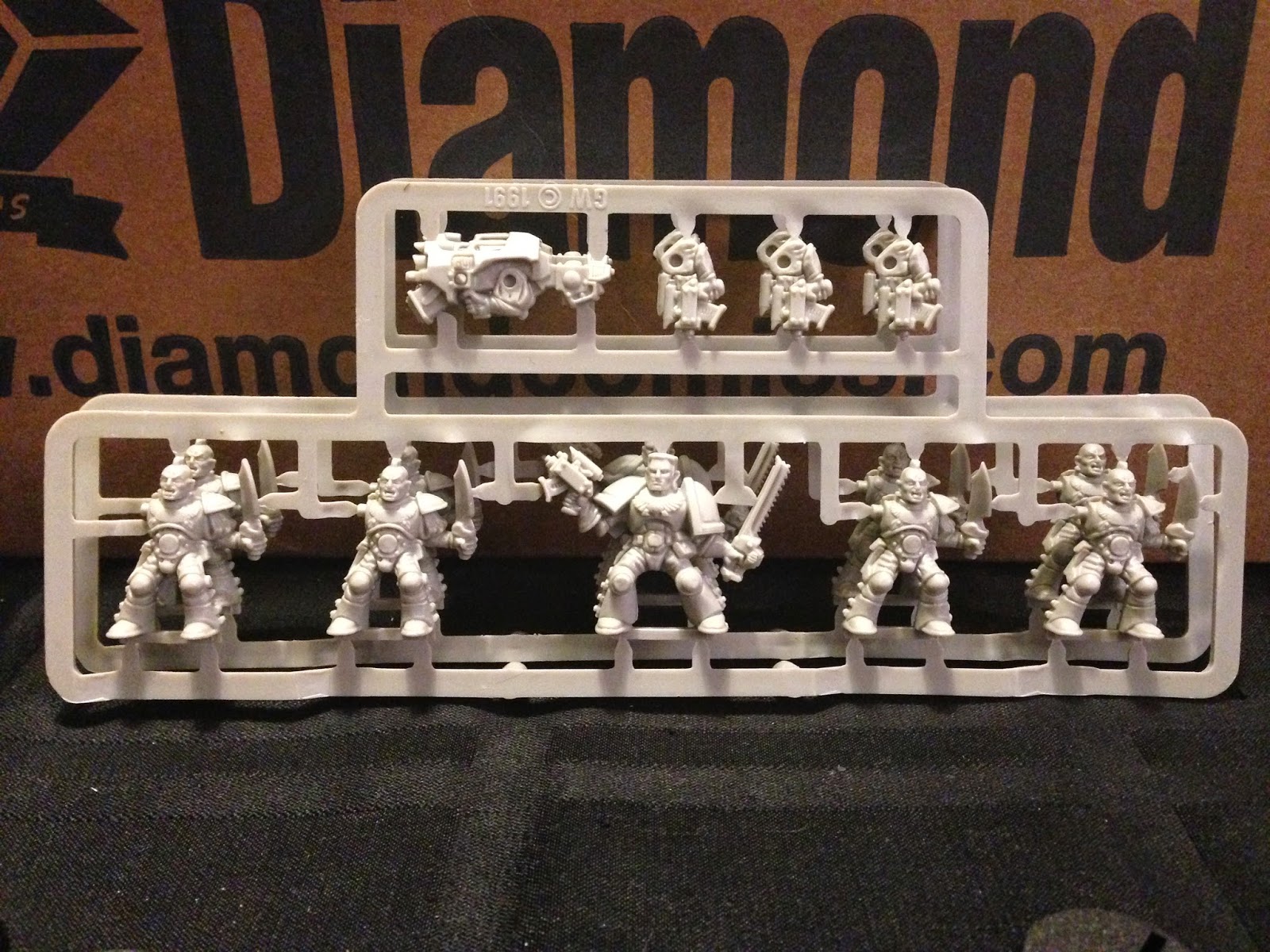 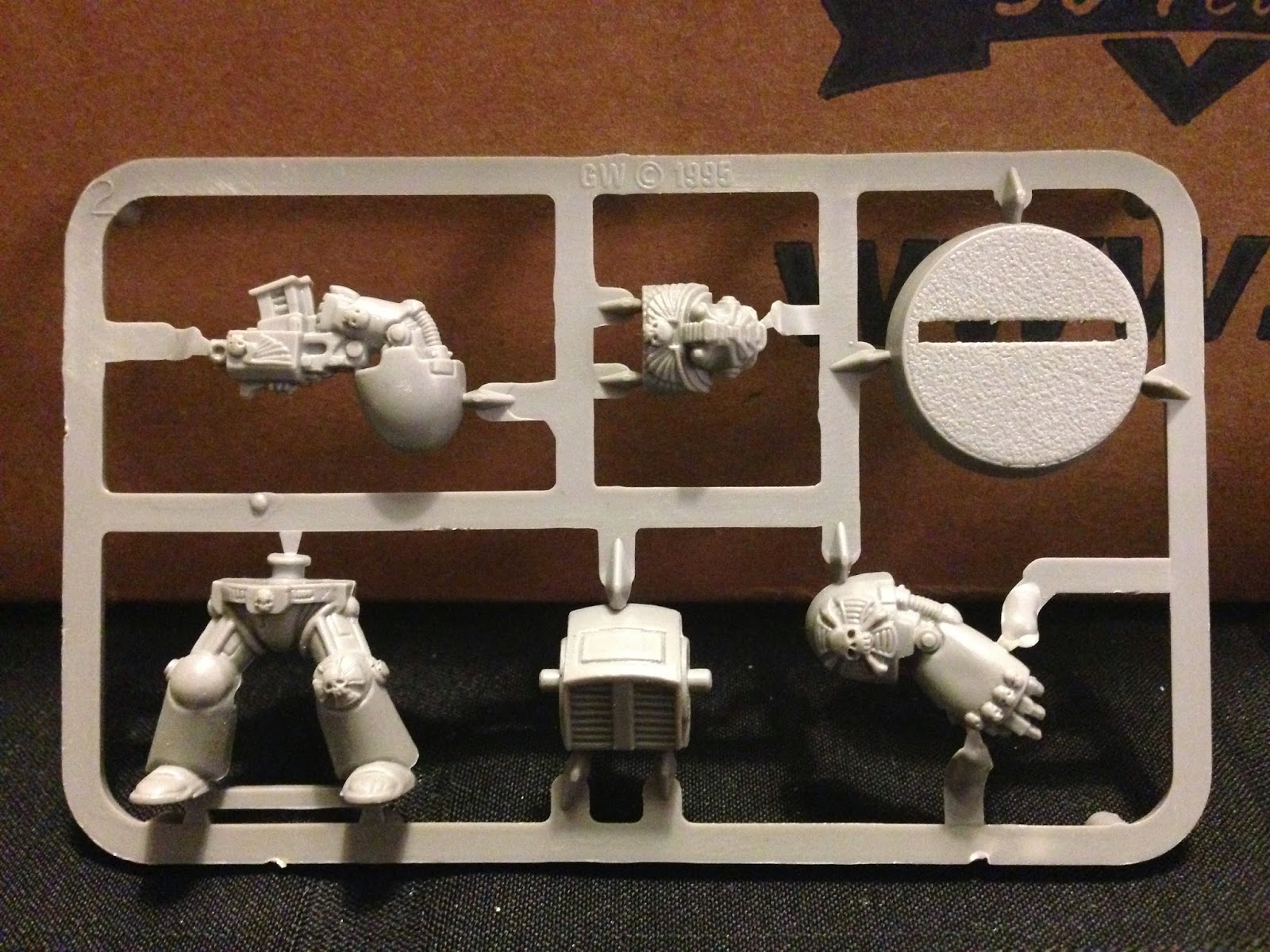 Tend bucks for this.  The Crashed Aquila Lander is an awesome terrain kit.  With proper bases and painting, you've got quite a bit of nice looking terrain for your table.  I'll probably base these on MDF and go from there. 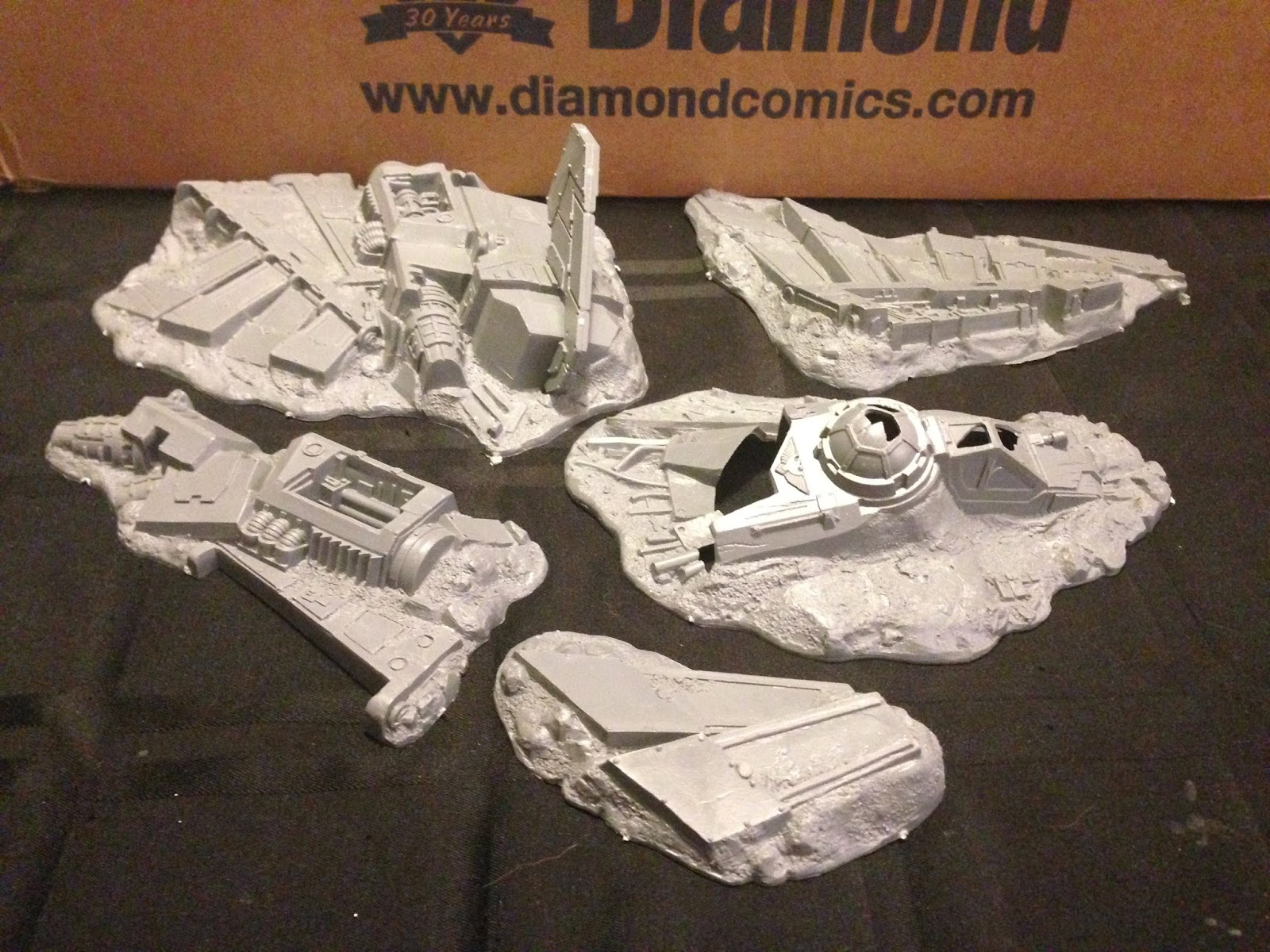 Can't go wrong with one of these.  You'll see why in a second. 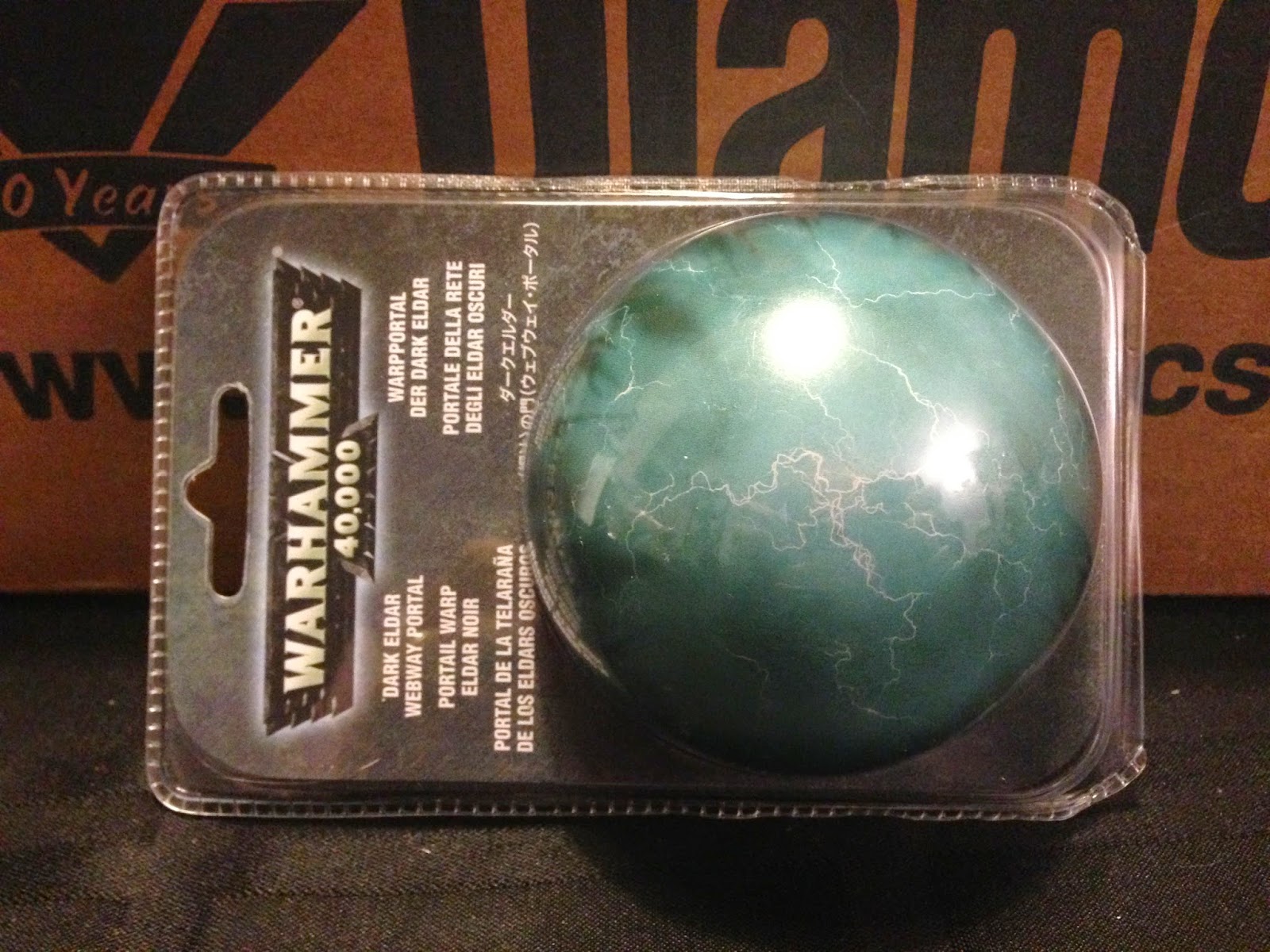 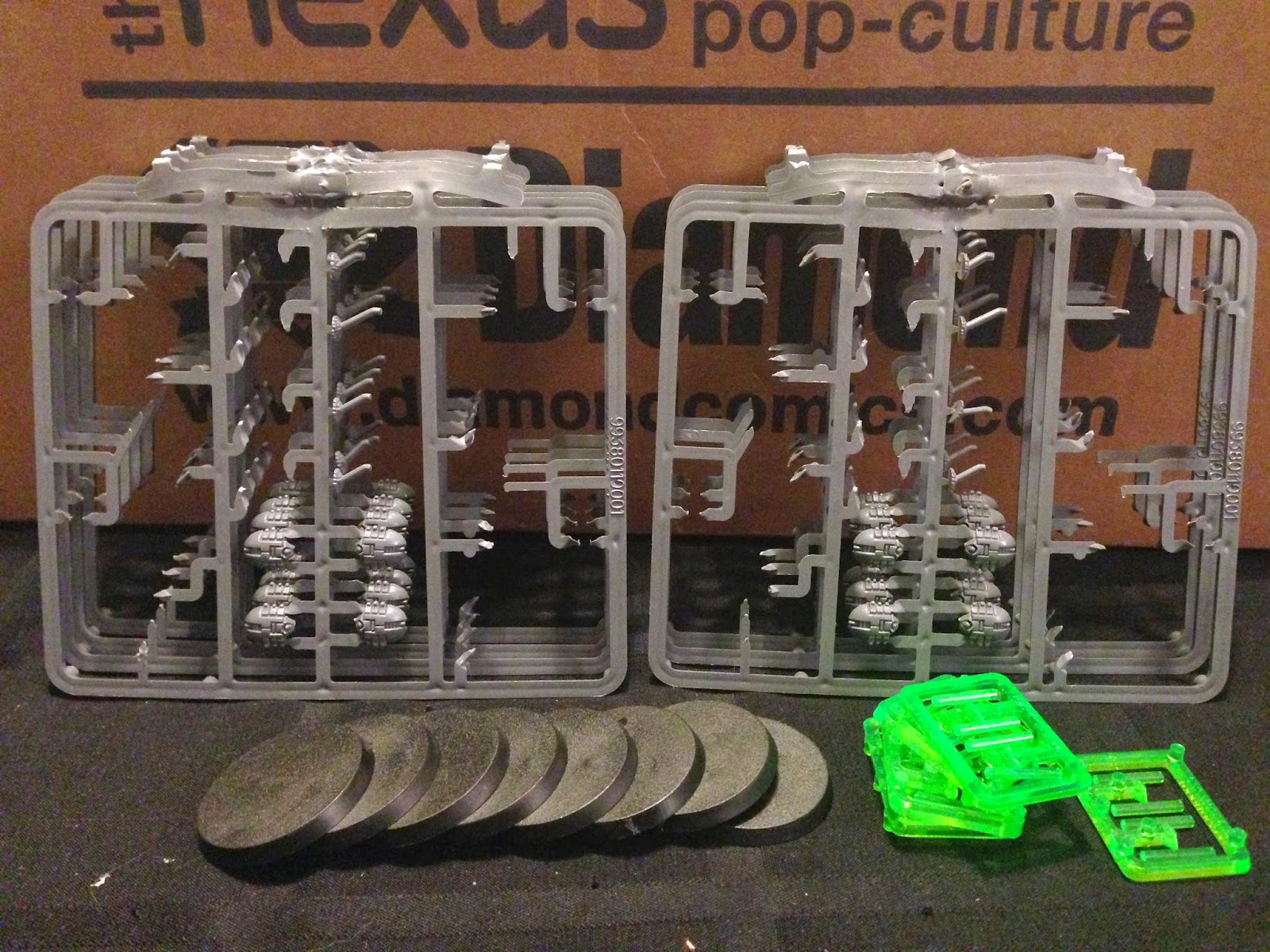 This was an awesome find.  Ten old metal Flayed Ones.  I think they're getting Deep Strike and Infiltrate now.  They might actually be usable.  I like these older ones better than the newer ones.  For one, metal vs. Finecast.  Two...  they're less cartoony and more menacing.  I like it! 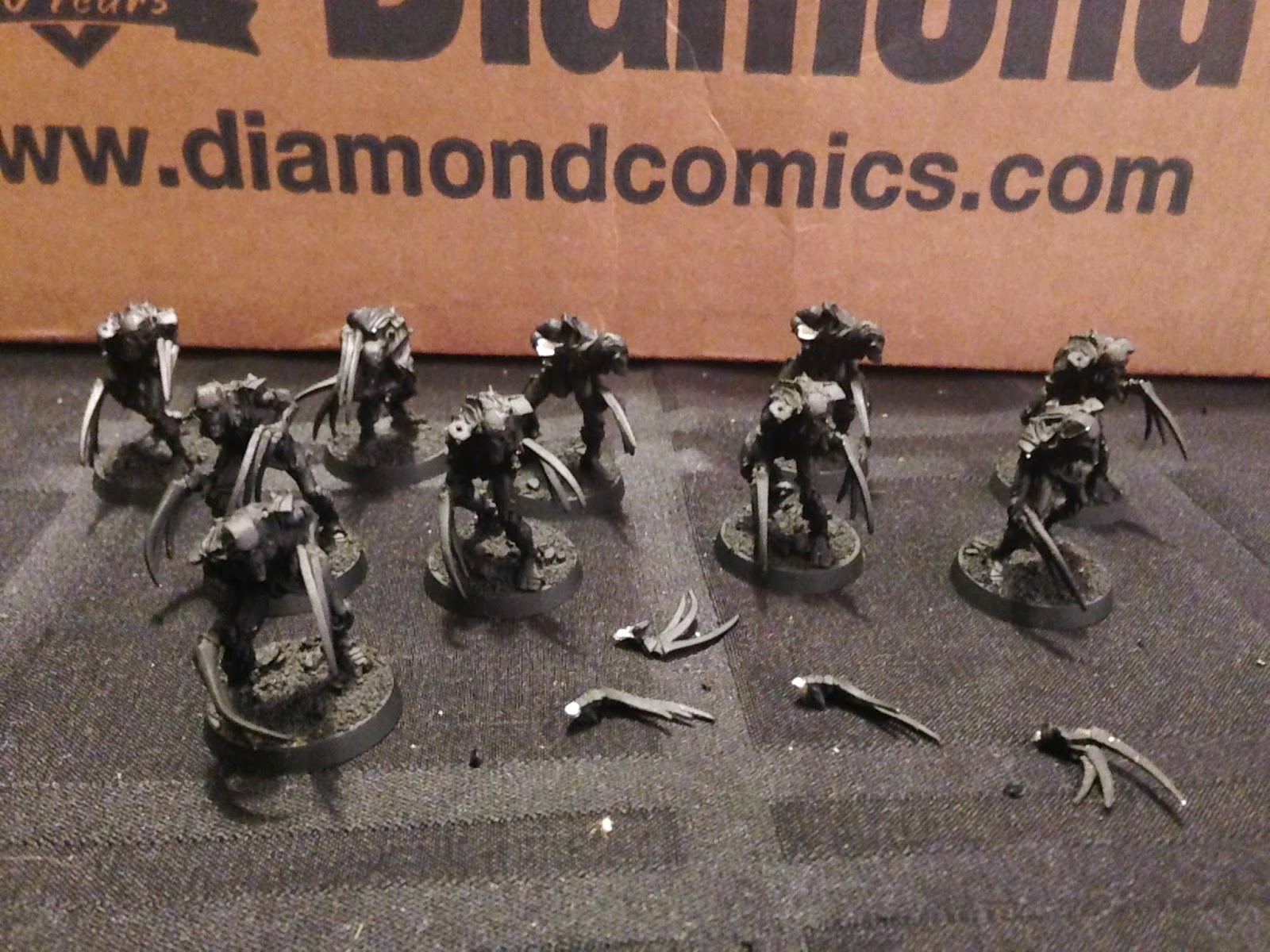 This dude was a steal.  $3.  Part of me feels like no aspiring painter can say he's serious unless he or she has made an attempt with this model.  I'm going to put some serious, top tier effort into this guy. 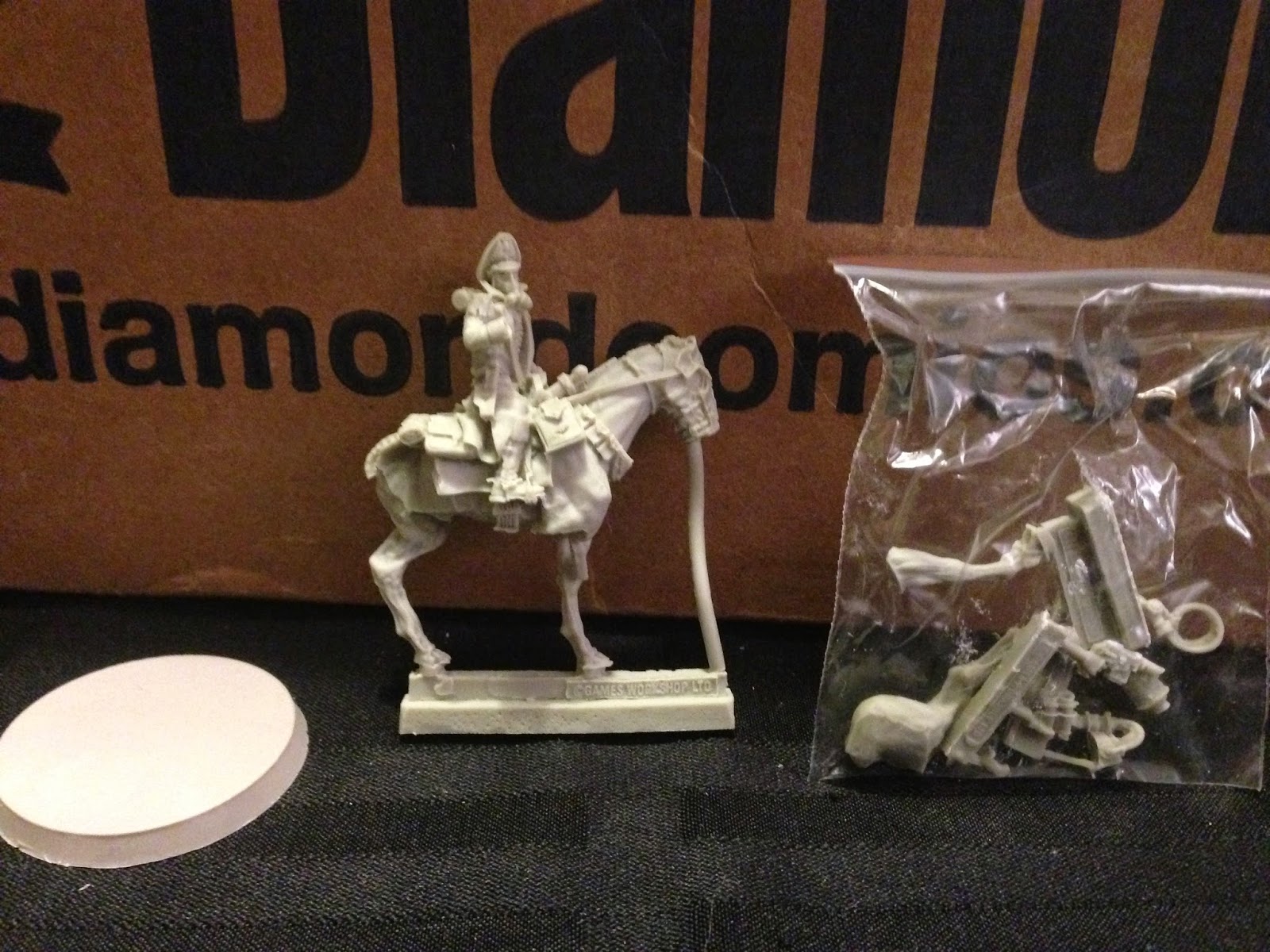 TRANSFERS.  ZOMG, SO MANY TRANSFERS. 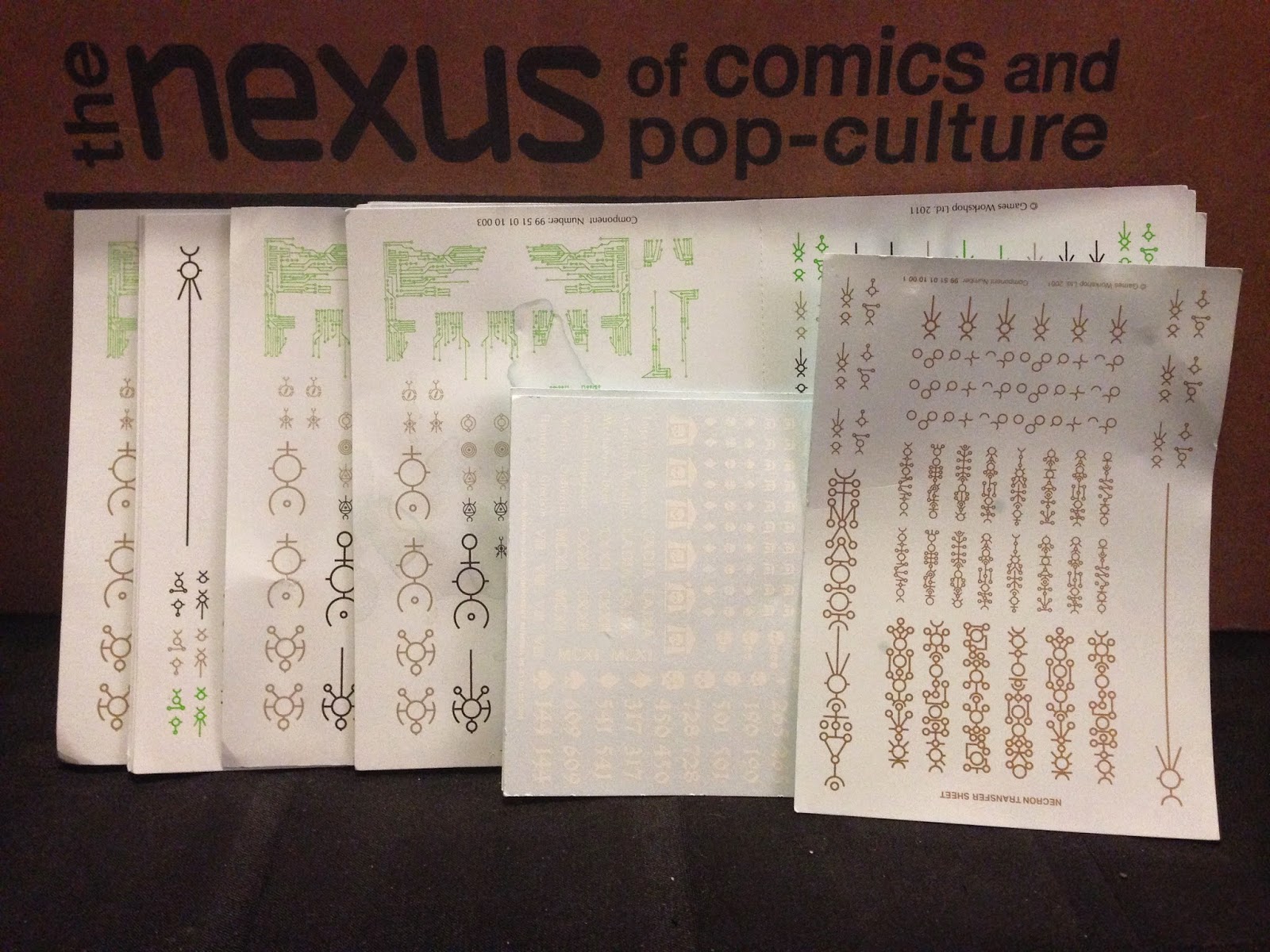 I grossly misunderstood this auction.  I thought I was bidding on standard Fantasy Chaos Marauders.  These things look great, but are super weird.  The legs are from Kroot models and the bodies...  I have no idea.  I'm probably gonna try to offload these somewhere.  At least they were super cheap. 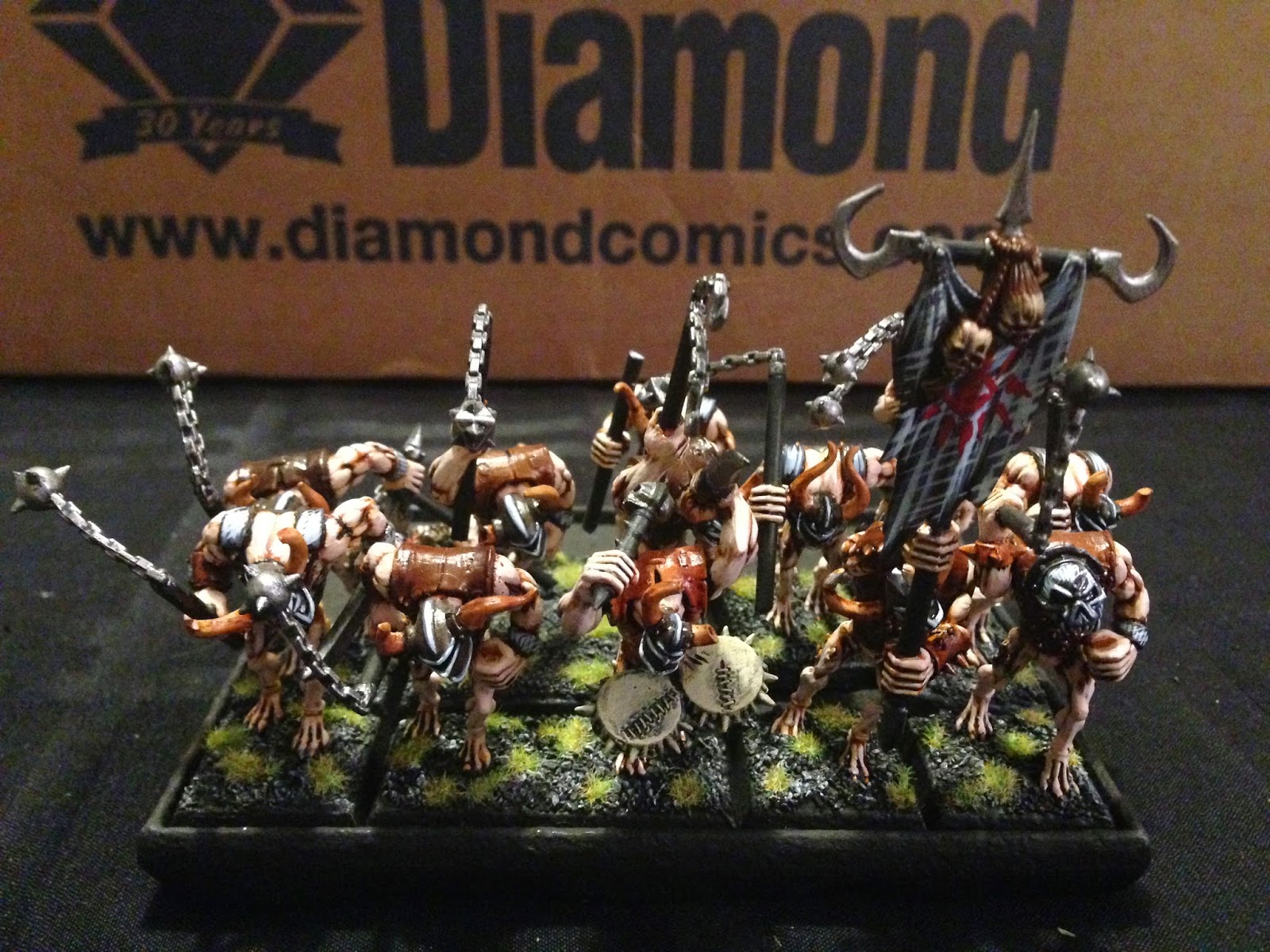 Big Box o' Sprues!  Lots of assorted Necron Bits.  There are enough bits to make about 20 Warriors...  except for the total lack of legs.  I might have to work out some sort of Necron phasing in/out setup by casting some legs in clear resin and then painting an electric effect on the transition point.  No idea.  But the box was around $5. 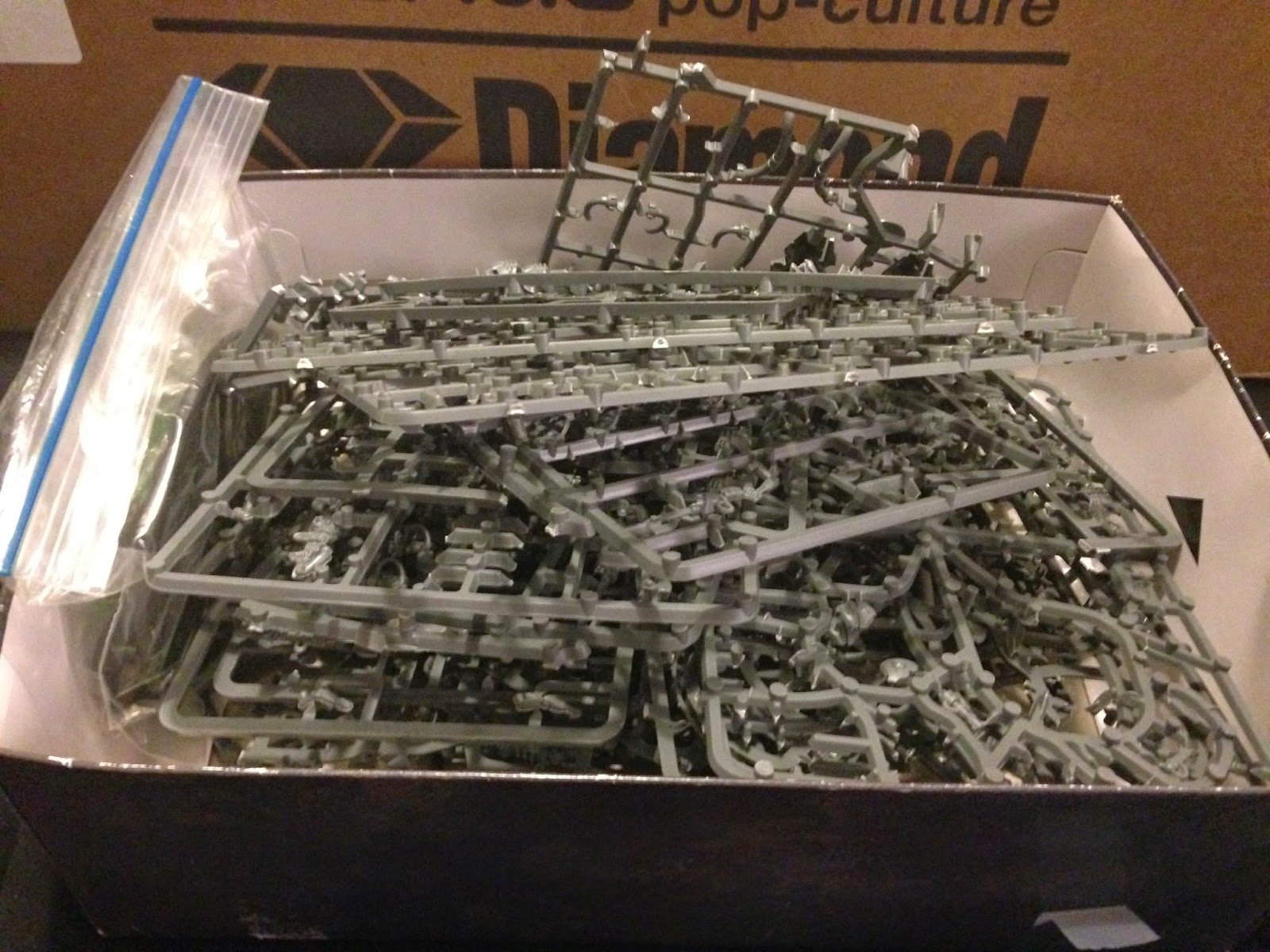 Can't go wrong with these guys, especially now that there is a Destroyer Formation in the new Codex. 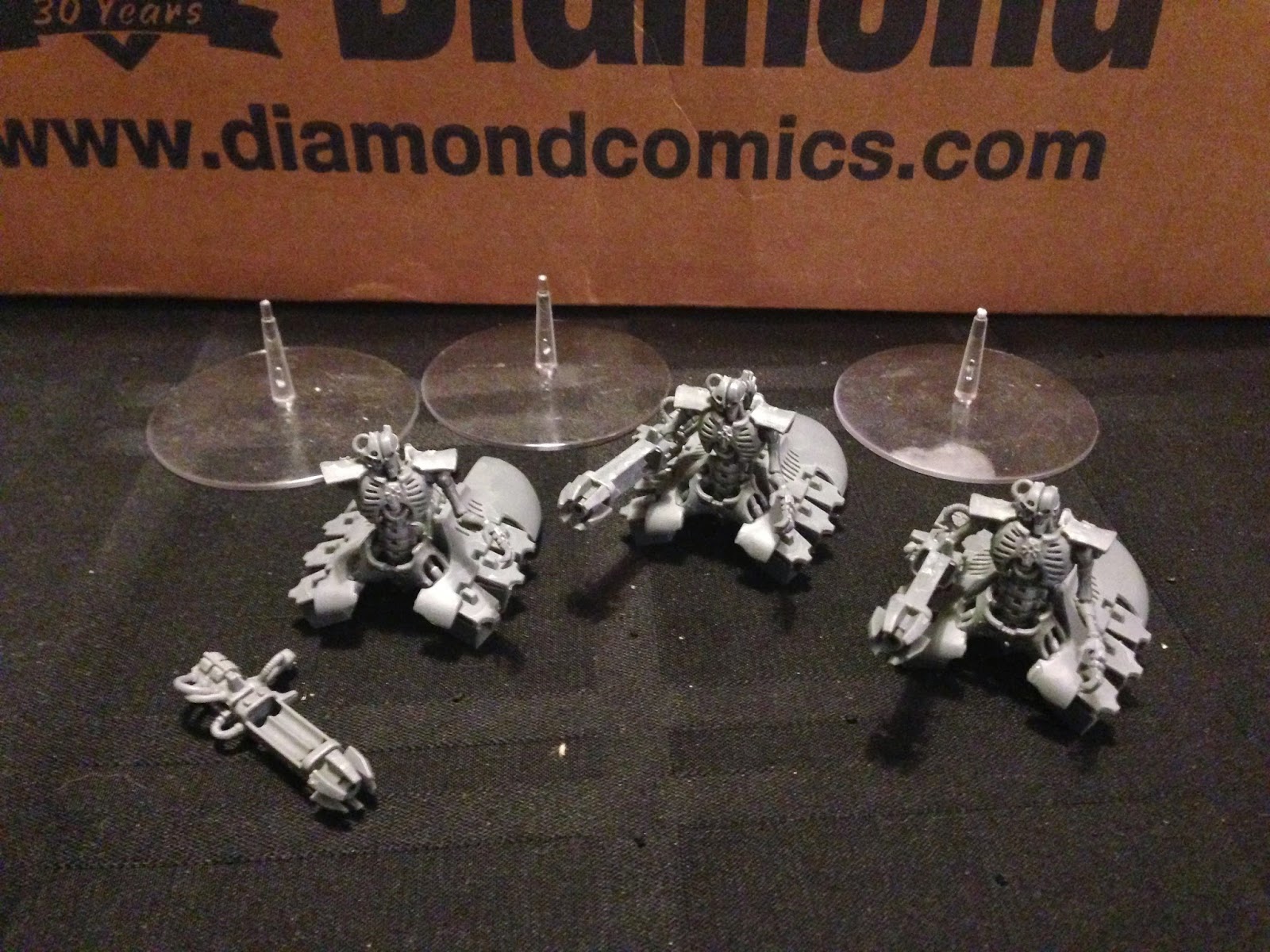 28 Warriors with 28 accompanying scarabs.  Other than the one assembled dude, everything is new on sprue. 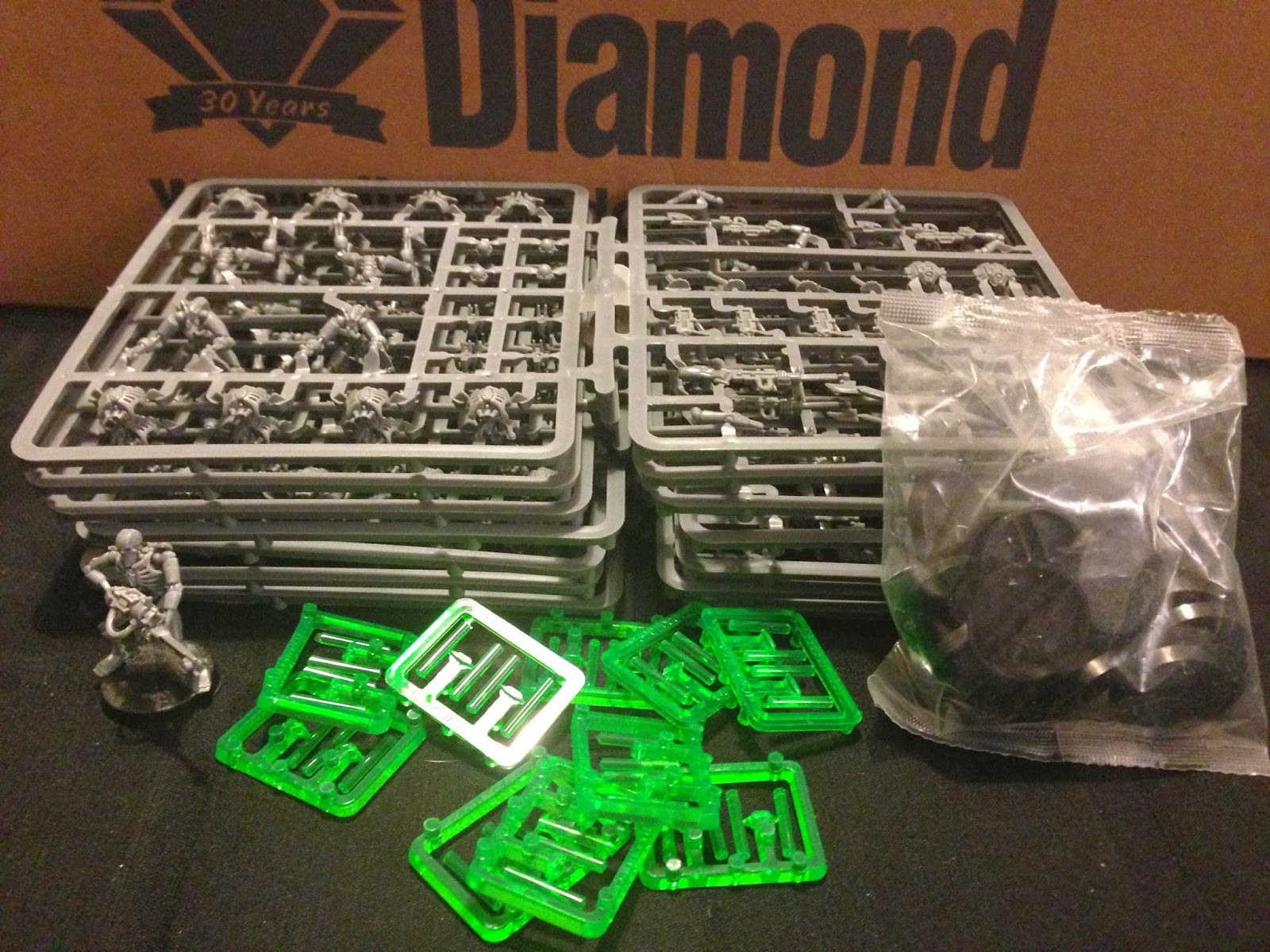 Yay!  This was a total surprise when I got home.  It was in one of the above lots and I didn't notice.  Pretty sure this is the out of print Lord.  I like the claw hand.  I'll probably replace the weapon's head with a new plastic one, but otherwise, this guy was a great find. 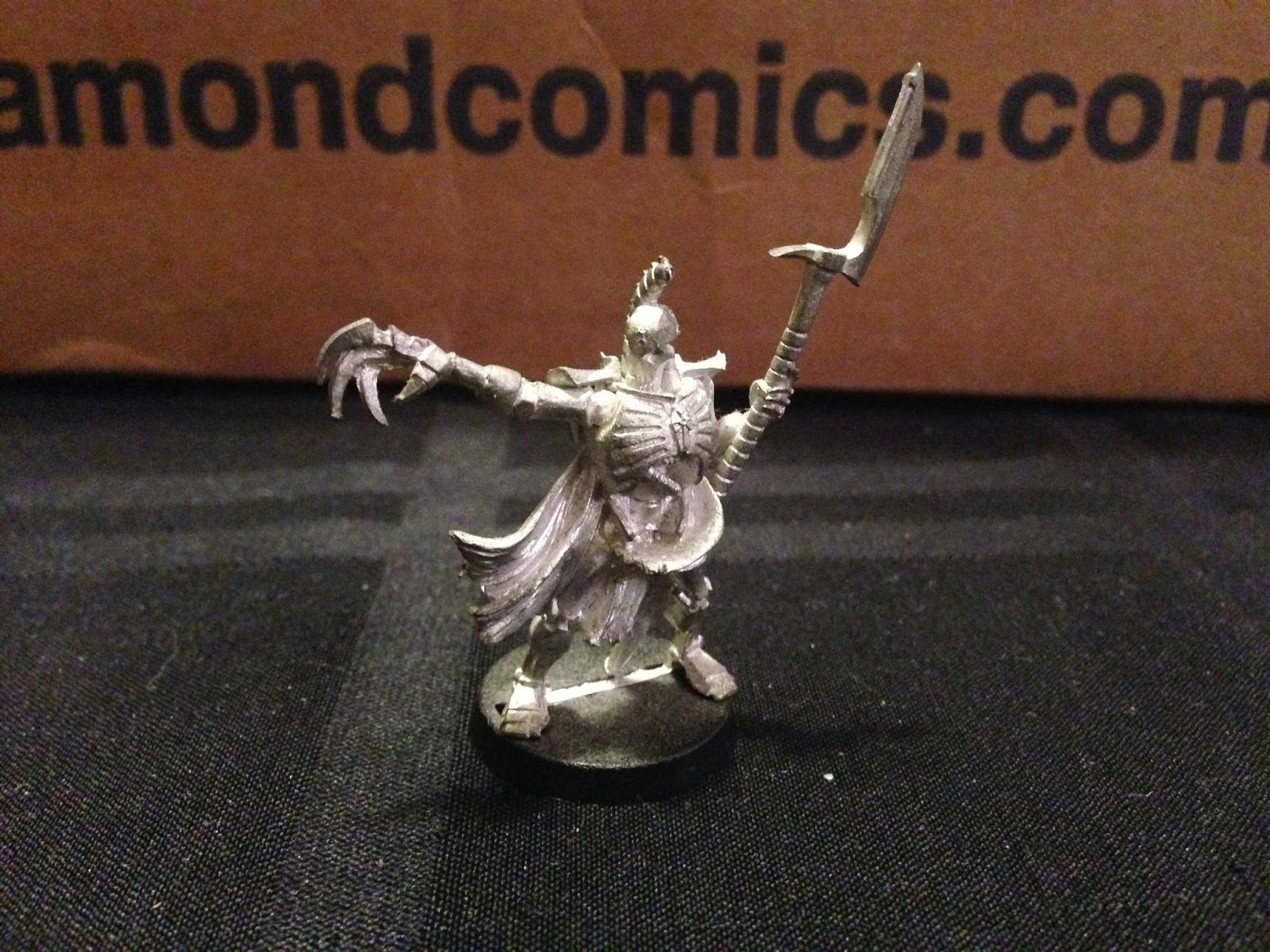 This was an amazing deal.  $7 for these guys.  It's enough parts to make three full Tomb Spyders...  er...  Canoptek Spyders.  I like the look of the old Spyders quite a bit and have been looking for more.  They're too expensive on eBay, so this was great. 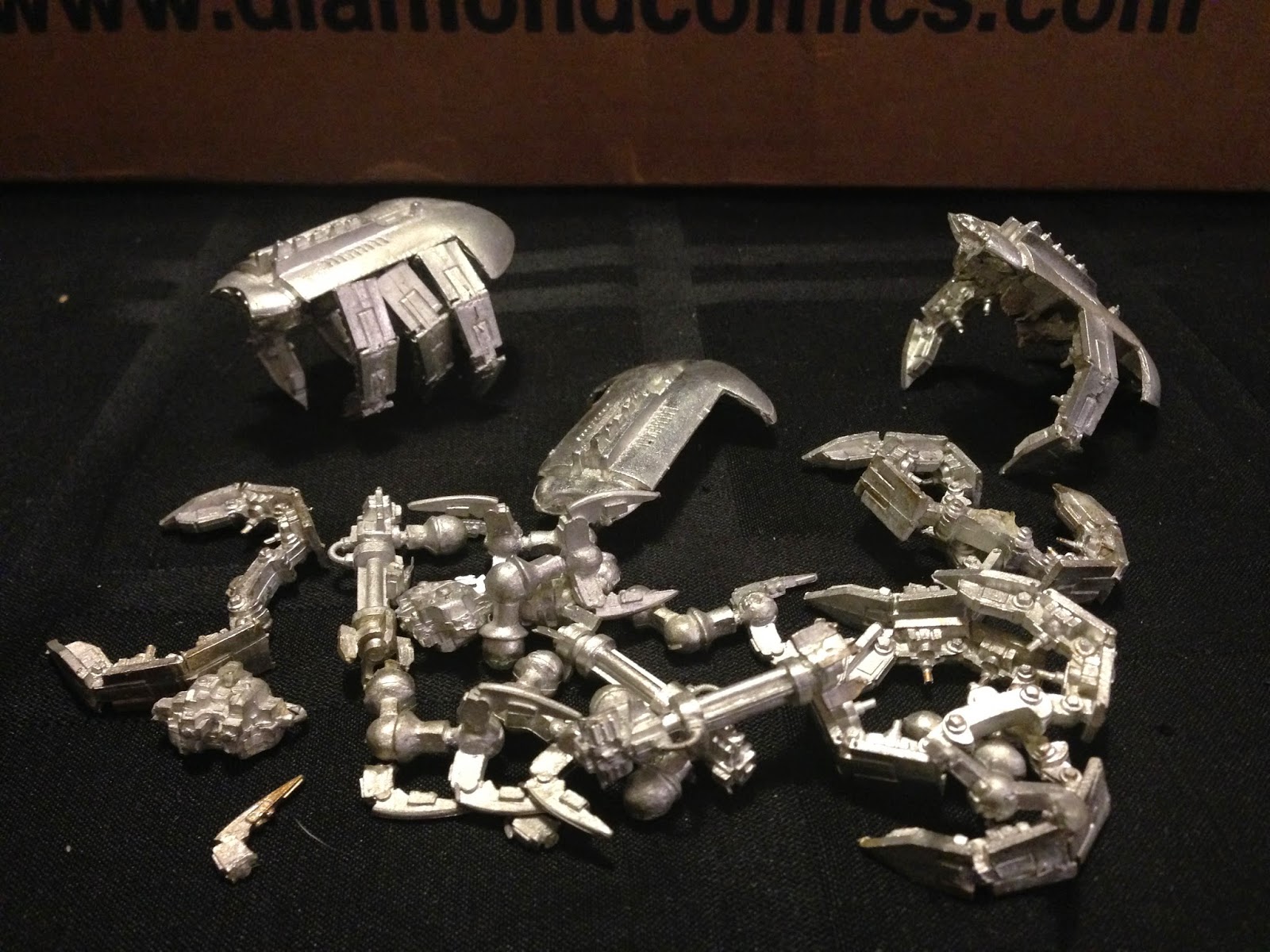 Lastly, a treasure trove of Dark Eldar.  I don't have time to pull them out and they're likely getting sold to a friend tomorrow, but you're looking at the following...


Add in the Webway Portal above and this is a really nice start to an army.  It's around $320 retail and that doesn't include the really nice assembly work with all the conversions.  Assuming my buddy buys and paints them, I'll pester him for photos to post later. 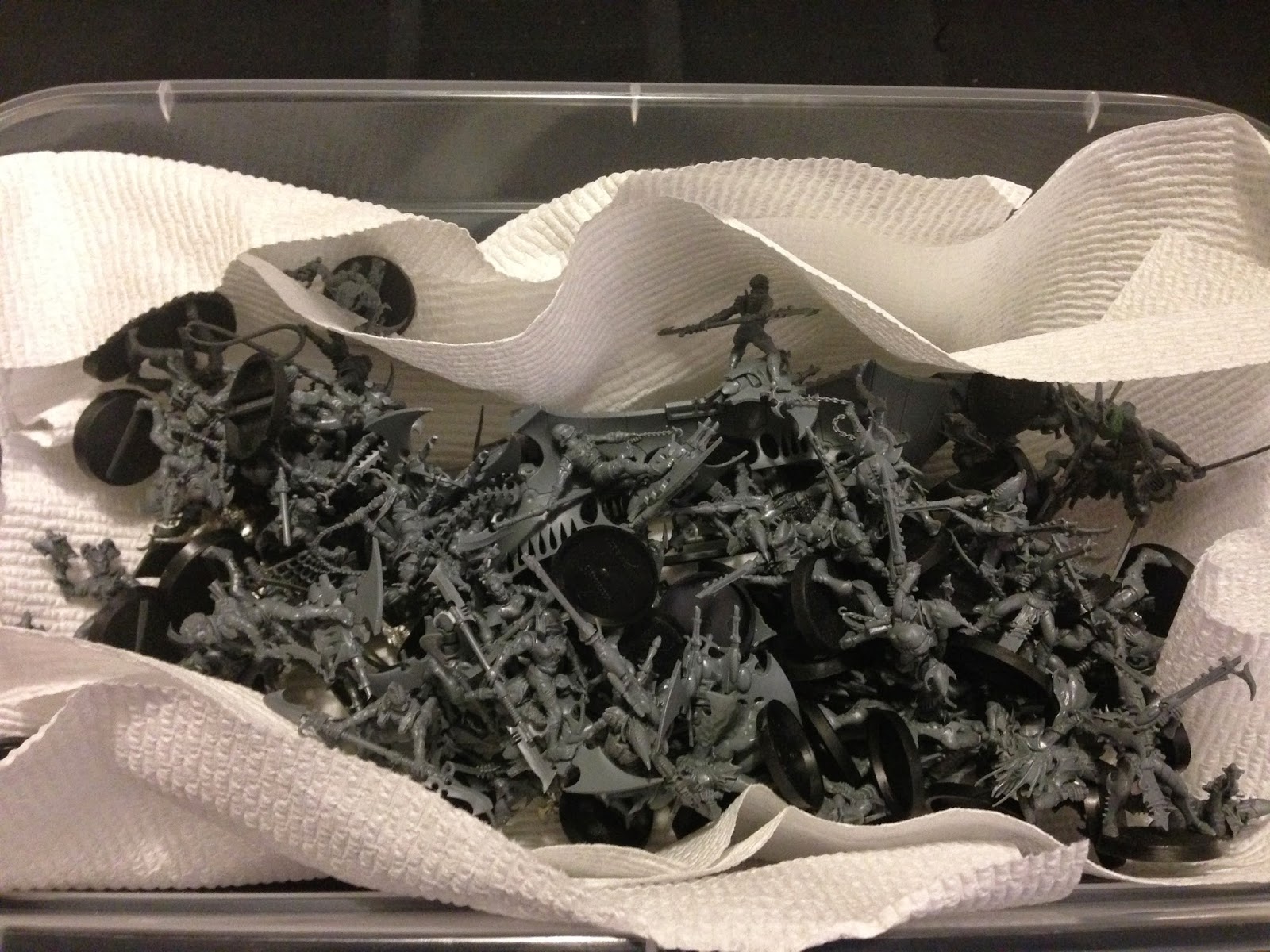 As you can see, this was a fantastic auction.  Usually I end up getting a couple of things at a reasonable, but not great price.  This time I got just about everything I wanted for a pittance.  I can't wait to get working on some of these things!

I'm going to try to work out a schedule over the next several days of what I'm going to work on next.  Unfortunately, I have very little ability to prime right now as it's cold as crap outside and I live in an apartment.  That means no garage or basement with a fan pointed out an exhaust pipe.