I've been in an assembly sort of mood lately.  I don't know why, but sometimes all I want to do is paint for hours on end and others times I just don't have the patience.  Lately, I haven't had any patience at all.

Plus, it's been really nice working with metal models again.  Picking up Warmahordes has been sort of like stepping into a time machine.  Sure, the models aren't quite as sharp and the metal piecces don't align quite as well, but overall I'm pretty happy.  There is a certain amount of nostalgia involved with putting these guys together.

Today's entry is a Warmachine Mercenaries Horgenhold Artillery Corps Unit.  It's a great unit for taking out massed infantry, but kind of useless for attacking the bigger, lone Warjacks and Warbeasts.  I'm looking foward to seeing how it performs on the battlefield. 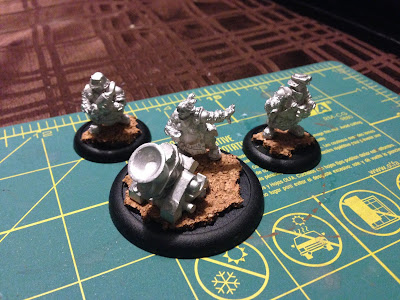 Here's a shot with everything I have assembled so far.  The dude second from the left is General Ossrum.  He's going to be the leader of my army. 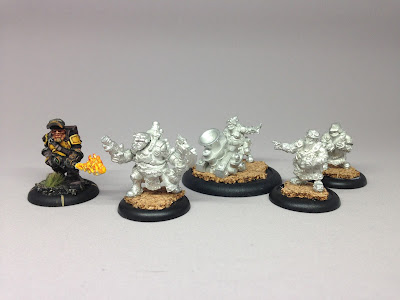 I should have some of the Warjacks assembled in time for tomorrow's post.