As promised, I got some time to put together a couple of the Warjacks for my Mercenaries Faction Warmachine army.  Right now, I own a total of six Warjacks.  Four of them are the little guys you see below.  They're basically guns on legs.  It's what I imagine Grots would build to replace Squigs if they were in charge of the 40k universe.

The larger guy is a Driller.  He's full melee with a giant drill arm and a claw.  I sort of imagine that he's a re-purposed drilling machine.  At least, that's the look I'm getting.  Plus, the Rhulics are basically steampunk dwarves.  Dwarves love mining, right?

Assembling this guy took some serious time.  The metal pieces didn't all fit together snugly, so I had to do quite a bit of pinning.  For those of you who don't know, pinning involves drilling two small holes on the two pieces of metal (or whatever) to be joined and then running a bit of paper clip in between.  This gives the bond a greater strength.  A properly pinned model can be thrown against a wall and it won't break apart. 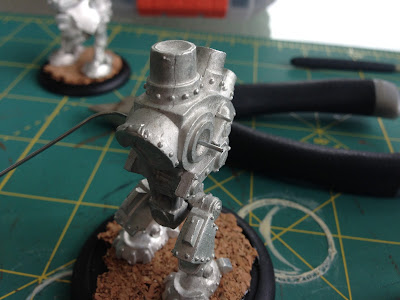 I only got two of the 'Jacks assembled.  Time is at a bit of a premium lately and I had other things I needed to get accomplished.  Curse you, real life responsibilities! 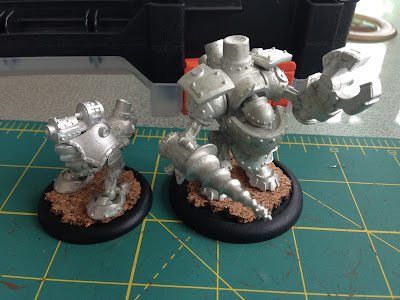 Anyways, here's a group shot of what I have assembled and painted so far.  There are three of the smaller 'Jacks and one medium sized 'Jack yet to be assembled.  The plan is to then paint everything and only once everything is painted, THEN will I decide what to buy next. 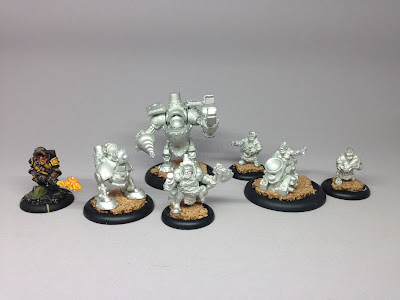