Well...  I played a few games of Warmachine/Hordes.

I didn't like it that much.  My army sucks.  It sucks bad.  I had been told that there were no bad units in Warmachine.  I was told that you could pick pretty much anything and have a decent chance at battle.

From what I can tell, the game is ultra competitive and combo based.  There doesn't appear to be much room for casual play.  Most games seem to end around round 3 or so and if you make a poor decision, you might have no chance to recover from round 2 onward.  This makes me a little sad, because I'm first and foremost a casual player.

This is the game that my one circle of gaming friends has chosen.  I can either play or grow apart.  I'm choosing to play.  Hence, I've been doing research and know what I need to do next to make the army a little more viable.  I need to add a couple of units to capitalize on the potential combo action.

First, I'll be adding Hutchuk, a Minion/Mercenary Solo.  He can be saved until the end game to pull off a surprise attack and knock down a Warcaster's defenders.  Plus, it's an amazing looking model. 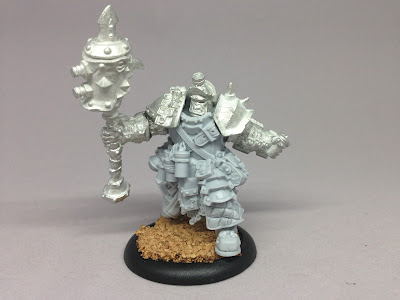 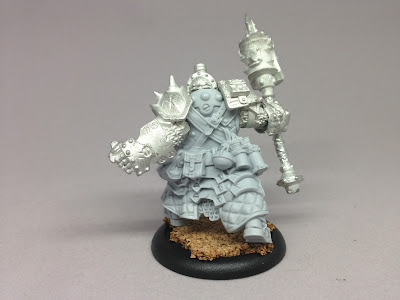 I'll also be adding an Ogrun Bokur to act as a bodyguard for my Warcaster.  He has Shield Wall, which allows him to take the hit whenever the Warcaster takes a blow.  I'll also be adding a second Horgenhold Artillery Corps.  It's a hard hitting unit that really benefits from Ossrum's Fire For Effect ability, giving them an extra +d6 on both to hit and damage rolls.  Past that, I'm not really sure.  I didn't really like how Thor worked, so I might be getting rid of him.  The Driller was amazing, but I let it get too far away from the action.

More to come.  I'm going to make this work.