I'm still tying to decide what I'm going to play in Warmachine/Hordes.  On the Warmachine side, I have a pretty sub-par group of Mercenaries as well as the Proctectorate of Menoth starter set.  I've been told by close friends that I might enjoy Hordes more. 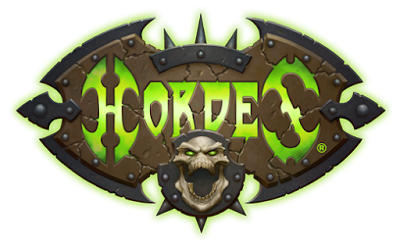 I looked over the various Hordes armies and tried to do a little research into the background.  My options are Trollbloods, Circle Orboros, Skorne, Legion of Everblight and Minions.  I was immediately drawn to Trollbloods for the visual appeal, but also immediately decided to pass since my buddy is playing Trollbloods.  Circle Orboros was an immediate pass because I just don't like the majority of their models.  I'm the sort of player who needs to like both the background and the models to really get behind an army.  Skorne was a solid maybe.  Minions was a solid no.  I learned my lesson with Mercenaries and will be treating Minions as a backup to a main faction. 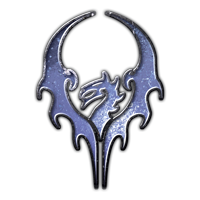 Ultimately, I decided to go with Legion of Everblight.  There are two reasons.  First and foremost is that another friend gave me some models.  Free models is a compelling reason to play a faction.  In addition to having some free models, I really like the concept of what is basically an undead dragon possessing mountain ogres and snow elves by driving slivers of his frozen heart into their chests.  It's a cool concept.

I went out and bought one of the new starter sets so that I'd have a small rulebook and a couple of the newer models.  The starter comes with Kryssa, one of the Legion's Warlocks.  I don't know much about her, but imagine that I'll probably end up preferring a different Warlock.  It's unlikely that the one in the starter set will most closely match my preferred play style.  The starter also comes with a Neraph...  a flying Warbeast with four wings.  It's fast and can get to where it needs to be quickly.  The two little guys in the picture below are Shredders.  They're basically mouths with feet.  Not much more to say.  The last purple guy is a Nephilim Bolt Thrower.  The Nephilim are creepy as hell.  The Shredders are basically "brewed" in a cauldron using Warlock blood and magic.  Nephilim are born via a Blighted Nyss surrogate.  The Nyss are the snow elves.  So, basically, these poor elves are knocked up by undead dragon mojo and give birth to monstrosities. 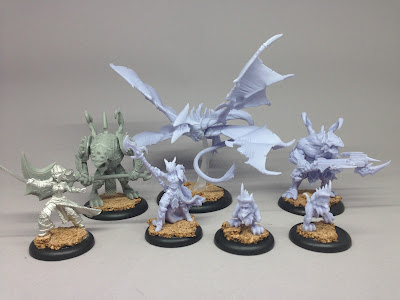 The grey guy is a Nephilim Protector.  They are dedicated bodyguards for their assigned Warlock.  From a rules perspective, they can take the damage whenever the Warlock is hit with an attack.  It makes your Warlock much more durable.  The last model is a Beast Mistress.  She's the metal model with the sword.  She's basically a Warlock in training.  While she can't control massive groups of Warbeasts and can't handle as much Fury, she can work with one or two Warbeasts with no issue.

My plan is to give these guys a shot this coming Friday and see if I enjoy the faction a little more.