Kurnoth Hunters can Suck It

My friends and I got together last night to play some more of our custom War Bands rule set for Age of Sigmar.  I was paired off against my buddy Chris.  Chris is a nice guy.

Let me repeat that.  Chris is a nice guy.  I needed to say that twice, because I'm about to go off on a tirade that characterizes him as a living breathing asshole.

My war band remains my Warlock Engineer, Warpfire Thrower Weapons Team, 2x Rat Ogors and a single Stormfiend.  The army I went up against was a Branchwych, a unit of 3 Kurnoth Hunters and another unit of 1 Kurnoth Hunter.  Oh, and the ever present freebie Wyldwoods. 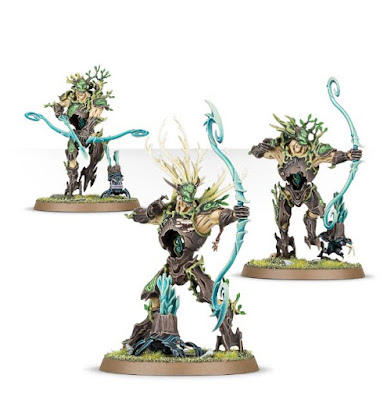 Fuck Kurnoth Hunters.  Seriously.  What was GW thinking when they wrote these rules and priced out this unit?

They cost 180 points for three models.  Given that you get free Wyldwoods, any half decent player is ALWAYS going to have them standing in magical Sylvaneth cover.  This means they have a 3+ (4+ plus cover) save and 5 wounds.  Oh, and did I mention that they have an ability that lets them re-roll saves during the combat phase?  Yeah, so a re-rollable 3+ save can EASILY become a re-rollable 2+ save.  These things are damn near impossible to shift.  Combine this with a very good 2 attack, 4+ to hit, 3+ to wound, -1 rend, D3 damage missile attack and they can just stand around and take pot shots.  Did I mention they have a 30" range?  In a game where 12" missile ranges are more common, 30" is ridiculous.  They don't deal much damage in melee, but they don't need to.  They just need to stay alive and fire their bows. 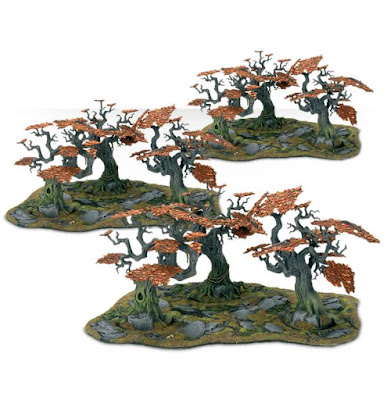 Any decent Sylvaneth player will have his Kurnoth Hunters standing in these trees.  Standing near them when magic is cast can cause mortal wounds...  unless you're Sylvaneth and then you're immune.  Charging across them can cause you to lose entire models on a D6 roll of a 1...  unless you're Sylvaneth and then you're immune.  Sylvaneth players get one free Wyldwood to put ANYWHERE on the board before either army deploys...  and one Wyldwood is three bases.  The Branchwych has an allegiance rule that allows her (him?  it?) to drop another Wyldwood in the first hero phase.  Oh, and all the Sylvaneth units can teleport between tree bases.  AND a unit can be held aside and deployed with no real risk of peril to any tree stand on the board during any movement phase.

Between the Kurnoth Hunters and the Wyldwoods, his war band feels ridiculously overpowered.  I know that things will end up balanced as we have a built-in balancing mechanism...  but I'm just not sure how long that will take.

Chris is literally hovering over me as I type this.  He's asking me to remind you all that he's a nice guy.  I'm pretty sure I saw him drowning kittens earlier today.  Might have been someone else, but it was probably him.  Just sayin'.

Come back tomorrow when I rage some more.  Ten bucks says I'm at the gaming store purchasing some Ironjawz.  They have a fun ability that lets them destroy terrain features.  Yeah...  that sounds good.