My friends and I met up for our first test run of our homemade War Bands rules.  I'll give the conclusion up front this time...  it was a huge success!  First, the quick build rules...

The four of us went with the armies we're most familiar with.  Jon picked Flesh-Eater Courts, Dmitri picked Khorne Daemons, Chris V. picked Sylvaneth and I went with a variety of Skaven clans.  I'll post the lists a little farther down.

We decided to play a multiplayer mission called "Fog of War" from the General's Handbook.  Essentially, each player rolls off for an order and then deploys in one quadrant of a 4'x4' board.  After everyone has deployed, we rolled off to see which two players were paired up on a team.  After that, it was go time. 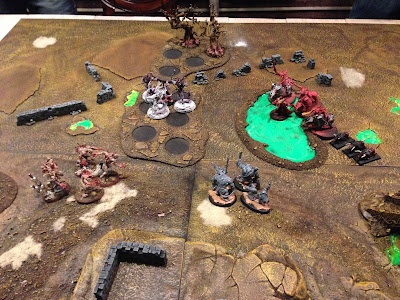 We all ended up deploying more or less close to the center of the board.  That ended up being something of a mistake for some of us as it ensured that combat would occur immediately.

The Khorne Daemons crashed into my rats and shockingly, broke upon the bulwark of two Rat Ogors.  I was shocked.  The Rat Ogors are significantly more effective than I thought they'd be.  The undead ran straight for the trees.  The trees turned out to be remarkably resilient. 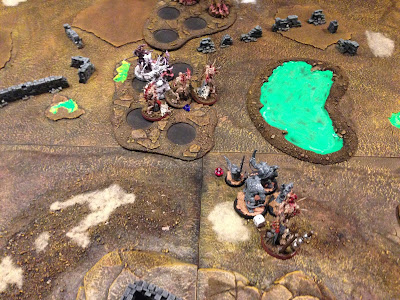 Round 2 was bascially combat time with all models locked in combat.  My Skaven cleared the Khorne models off the board.  The Sylvaneth continued to be nearly impossible to shift. 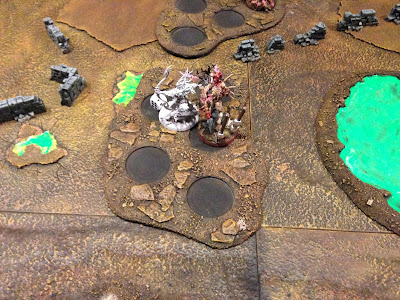 In round 3, the Skaven finally died to magic and shooting, with some of the wounds coming from within.  The Warp Fire Weapons Team attempted to super charge their fuel and exploded, causing 3 mortal wounds to themselves and dying in the process.  The Sylvaneth continued to be impossible to shift.  Their saves are insane.  A re-rollable 3+ save gives them a roughly 90% chance to ignore non-rending wounds.

The game ended in round 4 with a major victory for the Sylvaneth/Khorne team.  It was a good game and really highlighted how durable Kurnoth Hunters can be.  I think we may have actually played a few rules wrong, especially as relates to mortal wounds.  The trees might have actually gone down more quickly if we'd played correctly.

After the game we sat and talked for awhile and made a few tweaks to our armies.  Then we rolled for extra points for our week 2 expansion.  Overall, this was a ton of fun.

Here are the armies we used...