I'm pretty sure I mentioned it, but if I didn't Showcase Comics in Swarthmore, PA is throwing a 1500 point Age of Sigmar tournament on November 12th.  I've decided that I'll be playing Ironjawz and have finalized (sort of, see below) my list.

I've gotten quite a bit of the building done over the last several days.  Life has been...  well, life has been unpleasant lately and this has been a nice escape.  I'm always most productive when I have too many things on my mind.  I guess I have a lot on my mind right now.  All of this has been built within the last week or so. 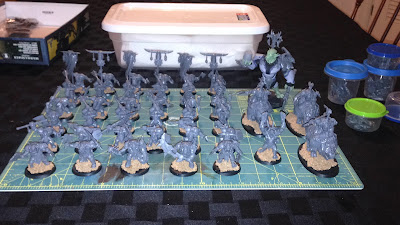 All I have remaining to build are the three extra Gore-gruntas and the other Warchanter.  I'm debating replacing the second Warchanter with a Weirdnob Shaman.  I think it would be nice to have some magic, but I also like the idea of dual Warchanters egging the 20 Ardboys on to a 2+ to hit, 3+ to wound.  That's a lot of attacks.  I'll probably decide at the last minute.  The decision will likely come down to how much I want to spend an extra $30.