I'm going to be playing the Heralds of Ruin Kill Team rule set with some new friends I met at a recent Age of Sigmar tournament.  I'm really looking forward to it.  There are a ton of different factions that don't quite line up with the regular GW Codexes.  As an example, there is a Tau Empire kill team list, but there's also a Kroot Mercenaries list with some units that don't normally exist in 40k.

I'm going to give Necrons a shot, mainly because I already have them painted up.

Here's my Kill Team...  hopefully it'll perform well.  I may have to make some changes.  My give me a reason to finally assemble the box of Tomb Blades I've had sitting around forever.

It's currently a Noble, five Immortals, five Warriors and two bases of Scarabs.  I'm thinking that it'll be pretty durable and the Scarabs will be able to rush forward into cover to take out threats while the rest of the army trudges forward. 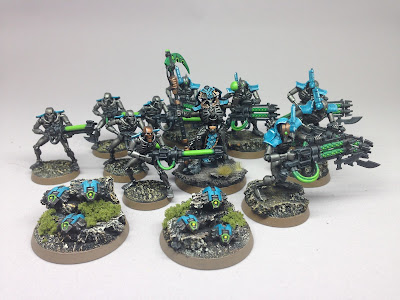