I met up with a few new friends over the past weekend and  we all played a few games of the Heralds of Ruin Kill Teams rules for Warhammer 40k.

It wasn't without it's flaws, but I chalk that up mainly to not having fully read the rules and having built a sub-par kill team.  I did what I normally do in these situations and just grabbed a bunch of models that were fully painted, with no thought to how they'd perform.

I had a Necron Noble (sort of like a lesser Lord), 5 Immortals, 5 Warriors and 2 Canoptek Scarabs.  My opponent had a very well painted Imperial Fists list featuring (I believe) about 10 Marines with a mix of Sternguard, Vanguard and regular Bolter Dudes.  One guy had a Heavy Bolter.

We played at Showcase Comics in Swarthmore, PA.  I can't speak highly enough about this store.  We were able to fill two full 4' x 4' tables with matching terrain.  Here are a few action shots... 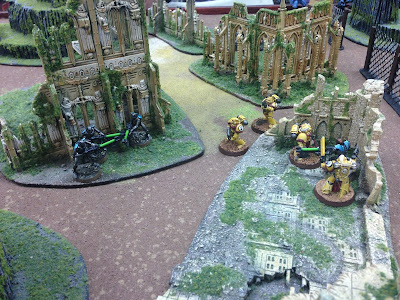 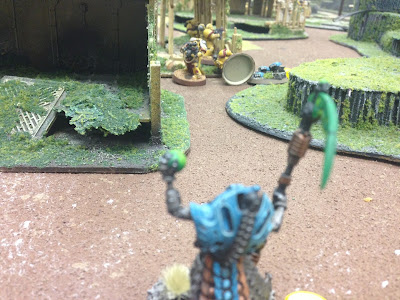 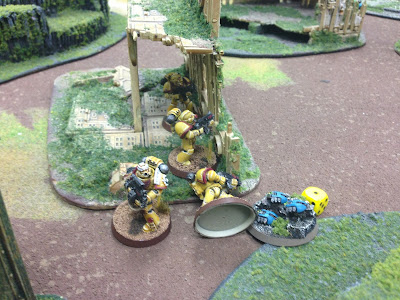 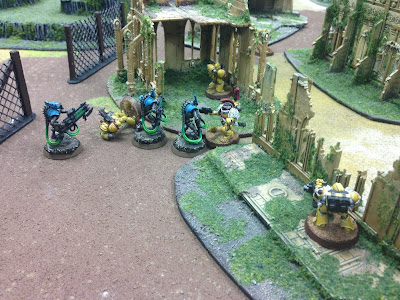 I ended up losing in a fairly overwhelming slaughter.  This is the first time in a long time I can remember Space Marines feeling like this unstoppable force.  It was difficult to put a wound on them and when I did, my opponent kept rolling 1-4 on the Injury chart.  Only a 5-6 kills a guy.  I, on the other hand, took more wounds overall and rolled far more high numbers for Injury.  Even with my Reanimation Protocols, I lost more than half my force and had to take Rout checks.  Necron Ld values are 10's across the board, so I stuck around and lost when we hit the end of turn 6.

Overall, it's a very fun version of the game.  My main take away is that I need to completely rebuild my list to add a variety of options.  I think that AP 3 is the magic you're looking for.  AP 5 might as well be AP -.