Ok...  let's face an ugly truth.  For many people, Warhammer 40k has become an unplayable mess of power balance issue and fractured rules.  I don't have the actual value, but I know it costs well over 1,000 USD to purchase a comprehensive rule set, reflecting all units and rules.  That's crazy.  As such, I can't really justify purchasing any 40k models right now.  I just can't see buying models for a game that I feel is unplayable.

...which is why releases like this are so frustrating.  GW is putting a number of new plastic kits for the Thousand Sons.  It looks like they're becoming their own faction.  The models are amazing looking and I'd love to buy them, but without a viable rule set, there is just zero point.  I'm far better off spending my money on something I can actually play with.

First up are the Tzaangors.  These are basically the same...  'race' of critters from the Age of Sigmar Silver Tower board game.  From a fantasy perspective, 'Gors' are basic Beastmen.  In 40k terms, Beastmen are considered to be Abhumans...  not exactly mutants, but close.  Tzeentch Gors...Tzaangors.  I'm guessing that they're basically the Cultists of the Thousand Sons army.  They look to all be armed with chainswords and maybe autopistols.  There is another picture with ten of them floating around, but they're all equipped the same way. 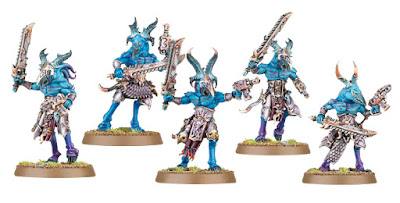 Next up are the Rubric Marines.  It's nice to see these guys have plastic models.  I've always said that if I ever go Chaos, I'll want a legion of the Rubricae marching to battle.  I absolutely love the one dude with a flaming Tzeentch icon coming out of his helmet.  I'm counting one Sorcerer, five flamer dudes, one assault cannon dude and only three basic bolter dudes.  That's an odd configuration.  I'm curious to see their rules. 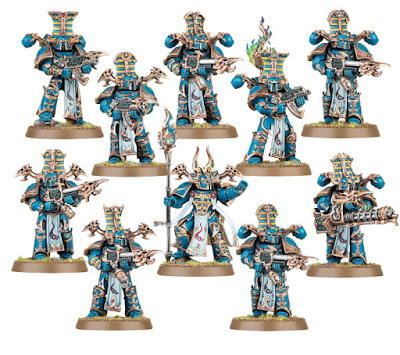 This next unit is huge.  I believe they're called the Scarab Occult.  They're wearing what looks like a Tartarus variant pattern of armor.  Equipment wise, I'm seeing what I expected to see, but the terminator sorcerer is a nice surprise.  He looks amazing.  I hope there are good weapon options with this kit. 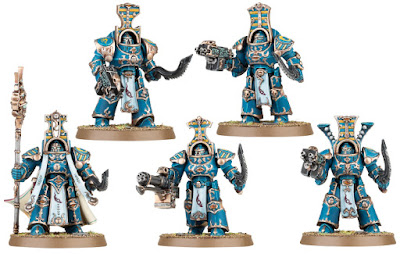 Last up are the Sorcerers.  I'm guessing that they come in a three pack and can be used either in a unit or run as separate independent character models.  I love the dude on the disc, but I'm not entirely sold on the others.  The one on foot takes the term "beakie" to a whole new level!  The floating guy looks to have Raptor claws.  I'm wondering if he also has a jump pack.  It's hard to tell without seeing the pack, but I'm guessing not. 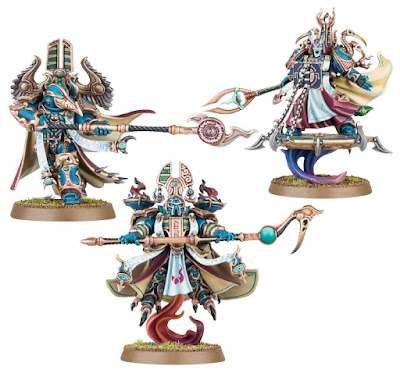 Finally, and not pictured here, I know there will also be an amazing looking plastic Ahriman model.  I've seen some pictures floating around, but GW hasn't announced him yet as of me writing this.  I'm sure I'll post a new picture.

Stay tuned until tomorrow when I'll be talking about my experience playing in a Star Wars Destiny pre-release event over the weekend.  Hint...  it was a metric ton o' fun!