I ended up going to Showcase Comics in Swarthmore, PA on Friday evening and played some Star Wars X-Wing.  I really like the game, but find it hard to get more than a handful of games in here and there.  To make life easier, I picked up one of FFG's 3'x3' "mouse pad" style maps.

I picked up the one on the right.  It's supposed to be Bespin.  The left one is nice, but EVERYONE buys that one.  Now I can have people over and play on my kitchen table.  I guess I always could, but now it's a little easier.

I brought my buddy Todd along.  He's played X-Wing a couple of times, but only owns the original core set plus an IG-2000.  I ended up loaning him a few extra TIE Fighters and he flew four TIE Fighters and the Aggressor.  I realize that's not a legal list as it mixes Imperial and Scum, but it's what he had and we were playing to learn the rules. 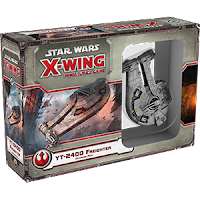 I also picked up a YT-2400 before leaving.  I've always liked the ship and want to try out some Rebel options.  I've never actually seen anyone fly the YT-2400.  I know it's not great for the tournament meta, but I'm more interested in casual gaming, so that's cool.

I'm going to toy around with my iPad and see if I can come up with a cool list to use.  Showcase has a pretty big Tuesday crew.  I might give it a shot in a couple of weeks.  Tomorrow is Election Day and we're having a party to either celebrate or mourn the election results, depending on how things go.