I Painted a Butt.

I don't know whether I should celebrate or cry in shame.  I painted one of the Pelegarth Bloodmasks as a test model.  I rarely paint much skin, so this was sort of a new thing.  I was surprised to find that the models are actually a lot rougher than I thought they were initially.  It was tough to get a smooth base coat in places.  All told, I think it worked out. 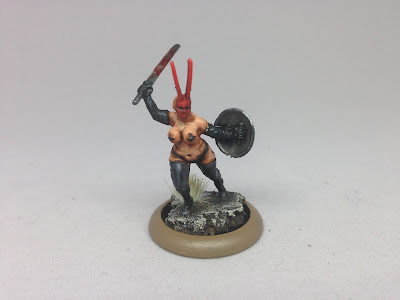 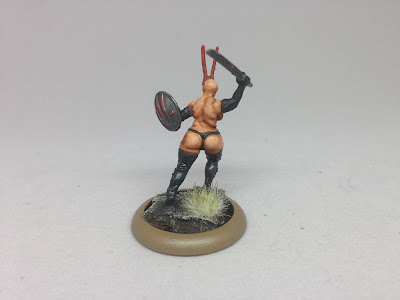 These are the colors I used.  I'm mainly posting this as a reference for myself, but if you want to try to replicate the effect, here you go...

The skin is a base of Ratskin Flesh, which required several watered down coats to make smooth.  It's a base, but it doesn't cover well.  I then washed with Reeikland Fleshshade.  I finished the model with a highlight of Cadian Fleshtone on all the raised areas.  I think I needed 2-3 watered down layers to get a smooth coverage. 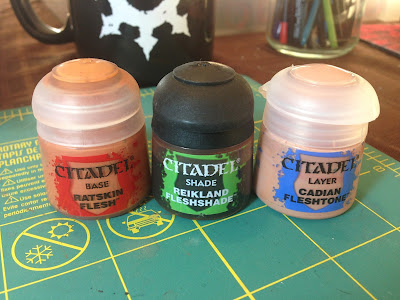 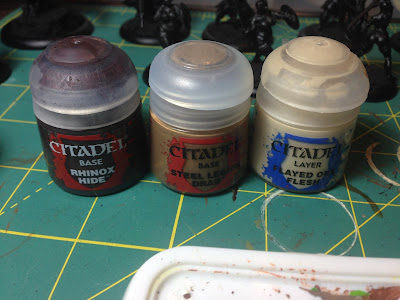 The metal bits are just Leadbelcher washed with whatever the black wash is called...  Nuln Oil?  The red parts are Mephiston Red and Evil Sunz Scarlet.  I put a little black wash in the eye sockets to give some depth.  I did try a little Blood for the Blood God on the sword.  I'm not sold on the effect, but figured that I bought the paint...  I should use it. 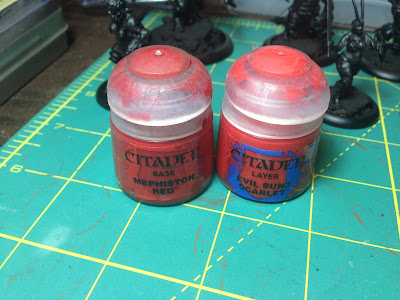 It's going to take FOREVER to paint all these skin.  I don't know what I was thinking.  At least now that I have a scheme, I should be able to knock them out fairly quickly.  For the Patrol list, I only have to paint 5 more.  The Brutes are also all skin, but it's a different model, so should feel like a different painting experience.