I decided that my Iron Warriors needed a little something something.  I previously decided that I didn't want them to have a massive iron skull on their shoulder pad.  I really like the relatively clean lines of heresy era armour.  I don't want to bling them out with all the crap that makes 40k era armour so busy looking.

I decided that I'd add a small Roman numeral to designate squad and then a series of stacked horizontal lines to designate individual models.  The stacked lines are meant to look like miniature hazard stripes.  I like the idea of the Iron Warriors differentiating each other by who has the longest hazard stripes! 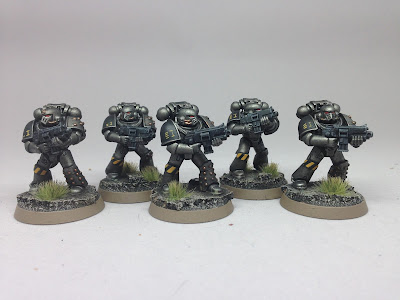 Here we have III-3, I-4 and II-3.  I added some extra detail work to the Apothecary at the same time.  I gave him blue lenses and painted in the yellow light on his backpack.  I'm debating doing a blueish heated metal effect on the meltagun.  I haven't decided yet.  It's a nice effect, but it's something I can do later when I paint the other three meltagun dudes.  I want the heated metal effect to be consistent between models in the same squad. 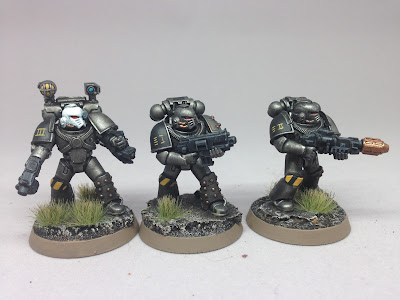 Last up is a quick glamour shot of the Siege Tyrants.  The guy with the bronze colored helmet is the Master.  The other dude is just a dude. 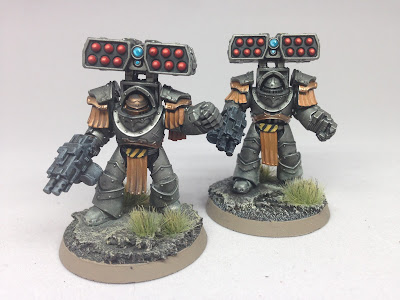 I'm thoroughly enjoying having a fully painted kill team.  It makes a huge difference when playing a game.