My wife was out of town from Friday night to Sunday morning, so it seemed like a good time to try out the new Kindred Fire campaign for Descent via the Road to Legend app.  This app eliminates the need for an Overlord (Dungeon Master Guy) and allows anywhere from 1-4 players to run a campaign.

I didn't do well.

I ended up choosing a Barbarian class character and a Thief class character.  In retrospect, I needed more defense and some healing.  I though the thief would be useful as it's easier to grab the various search tokens and get more potions/what not.  I didn't really use them though.  The Barbarian wasn't bad, but if you roll poorly on defense, you're boned.  I didn't really have any way to heal.

The first mission started out pretty well.  I was scouting out a local temple, looking for an escaped cultist when a Merriod (like a shark with legs and eel like tentacles coming out of it's head) attacked.  A band of Kobolds ran to its aid. 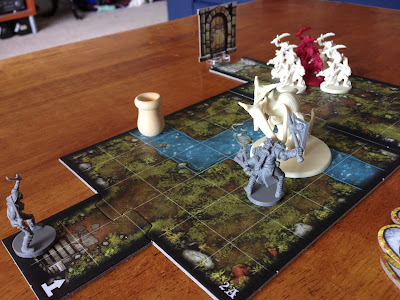 I dealt with the welcoming party without real issue.  Opening the door you see above showed me a Crypt Dragon.  Seems legit.  Dragons are friendly, right?  Oh, and that door on the right of the photo?  The game told me that the area in front of it was just coated with sprays of blood and gore.  Awesome.  Note to self...  avoid that door. 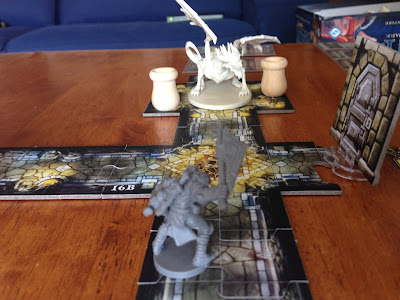 Turns out that Barbarians don't back down from challenges and Thieves want to open ALL OF THE DOORS, so I caved and opened it.  Had to pass multiple skill challenges, but made it work.  Inside I found a pair of enchanted dice that let me stress myself out a little to re-roll a single result per activation.  Pretty cool to find a relic right off the bat.  I went on to finish the first mission successfully. 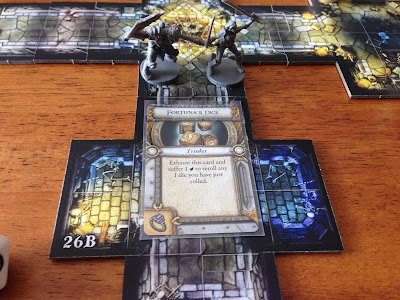 The next two though...

The below photo is shortly before I died.  The game has a mechanic called morale.  Your morale starts at the number of heroes you have and goes down by one each time someone dies.  When you go to town, morale rests.  Essentially, if you have two heroes like I did, you get two deaths "for free".  The third ends the mission.  The photo below is shortly before both heroes died.  The Barbarian then stood back up and died again.  The Zombies just kept spawning and I couldn't figure out how to "shut them off". 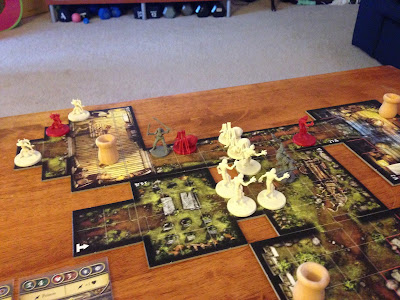 I wasn't able to return to town after the above side mission and had to try the next story mission.  Because I hadn't been back to town, my morale was still set at zero.  I entered the map to find five Goblin Archers and another Merriod.  I killed the Merriod in my first activation, but then the Goblins went.  The game gave them an automatic +2 damage to each attack.  My dude only had 14 health and rolled terrible for defense.  The first monster activation of the mission caused me to fail it.  Awesome.

Overall, the solo mode campaign is a ton of fun.  I'm seriously considering starting over with different classes though.  I think I might need a healer of some sort to replace the Thief.  I'm thinking of switching to the default Knight and "Battle Cleric" type characters.  They look like they could take (and dish out) a beating. 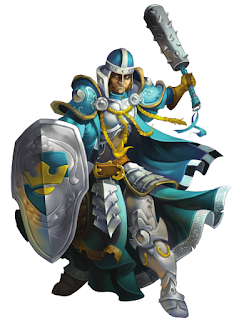 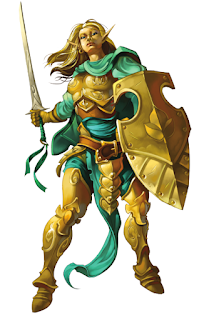