I love this objective for it’s sheer arrogance. It’s hands down the most telegraphed and ballsy objective in the game. 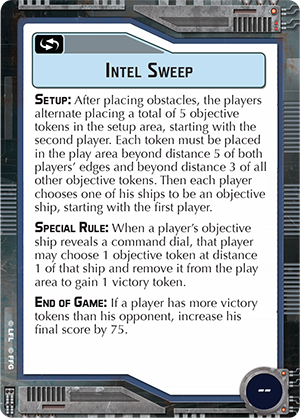 When you put this on your list you send a very clear: We both know what I’m going to do. I know you can’t stop me, but it’ll be fun to watch you try. If that isn’t your exact logic when you take this list, you’re doing it wrong and need to take it out of your list. Because this objective requires you to have a plan and expose that plan to your opponent. Additionally, most people won’t pick this objective unless they think they have a reasonable counter. So, from out of the gate this objective is both a race and a con job.

The nice part about this objective is it blends well into any general strategy. You really should have a general idea of where you want your fleet to go before the game starts, so you can put your objectives along that line. Additionally, the token furthest away from your objective ship is the one your opponent needs to race towards, unless they decide to make a play for your objective ship. Plus, your opponent can’t really ignore you because of the 75 points awarded from claiming the most objectives.

The way I play the objective is simple because Rebels, especially Ackbar, like to travel in a very standard swirl pattern. I like to put my objective ship in the middle with two ships flanking it (two gups work, I prefer one gup and one MC30). The flankers are normally set back more towards the board edge by one or two. I do this for two reasons: one it guards against the bumper cars; two, it means the objective ship can’t be flanked without a high price being played. To that I add my squadrons either near and around the objective ship. Most counter to this mission involve killing the objective ship, plopping a bunch of rogue fighters around it is a pretty good deterrent.

Really you should start by testing this objective with your current play style. Set the tokens along your normal flight path and see how it goes. It’s easy to adjust and tweak this mission, so find a decent opponent.

This list doesn’t call for any upgrades, except maybe engine techs. The piece of equipment you need to take is a ship that has speed three or four. A speed two lumberer is too slow to reliably get the three tokens you need to win.

In terms of commanders, I like Ackbar, Tarkin, and Iblis. Guys that offer you a strong offense, lots of options and enjoy sitting back. This protects your flight plan and lets your opponent sweat bullets. Motti is a good choice for a little extra hull, but like I said: as long as you have a reasonably fast ship, plan your game your way and tweak from there.