I got to play through the entire three scenario campaign that comes with the core Arkham Horror: The Card Game boxed set.  It was a huge amount of fun.  There are a fair number of rules to keep track of, and we definitely got some of them wrong, but we had a ton of fun in the process.

I'm excited for the next products in the line to come out.  It looks like the deluxe sets...  the ones in boxes...  will have three scenarios and extra investigators.  The clam packs will have one scenario each.  The first cycle of releases is called the Dunwich Legacy, which will start out with a deluxe boxed set. 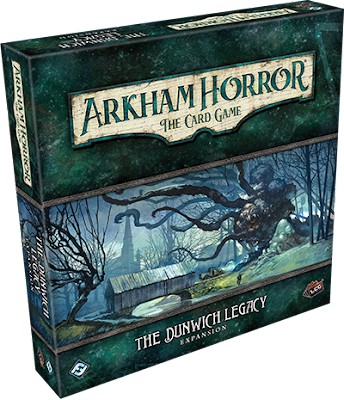 It comes with either four or five new investigators.  I was only able to find pictures of two, but the core set comes with five, so I think I'm missing something.

I really like the ability on Rex Murphy.  His stats aren't impressive, but if he's able to get some boosts, he'll be able to pull off the ability pretty often.  He's also really sane.  I also like Zoey because she seems like a total badass.

The first three expansions in the cycle have also been announced.

Of these three, the Essex County Express immediately jumped out at me as being pretty cool sounding.  It happens on a train with all of the locations being in a row.  I'm assuming that like in the wooded scenario in the core set that you'll randomly deal all of the cars face down and not know what they are until you flip them.  That seems like a little cool mystery.

Lastly, I totally bought one of the play mats.  These things are like giant mouse pads.  I used to play Magic the Gathering in the long, long ago when nobody used mats.  Evidently, it's commonplace for games these days.  I bought the mat mainly for Star Wars Destiny, but will be using it for this game also.  I picked up the one with the Rougarou on it.  He's the main bad guy in the Cure of the Rougarou standalone scenario that was first available at FFG's Arkham Nights 2016.  I bought a copy of that scenario, but haven't been able to play it yet. 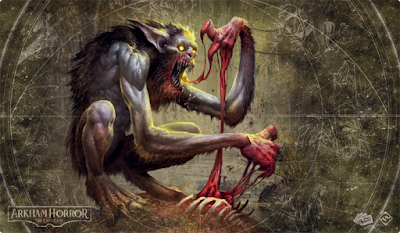