Hello all!  I'll be talking a little bit about Destiny today.  I'm in the process of putting together a mill deck.  For those of you who aren't card gamers, most of these sorts of games have two victory conditions.  Condition one is to kill your opponent.  Condition two is to cause your opponent to run out of cards.  A mill deck ignores the first condition and focuses almost exclusively on the second.  Given that Destiny uses a 30 card deck, I just need to force my opponent to burn through 30 cards.  He or she will use at least 10 or so cards himself throughout the game, so I'm thinking I need to dish out 20 or so cards worth of discard.  Discarding from the deck is better, but discards from the hand work to as you must draw back up to five cards at the start of each round.

I initially thought about running ePadme and eAckbar (the e meaning the more expensive, two dice version).  The work pretty well with Padme causing discards from the deck and Ackbar penalizing the player for emptying out his hand. 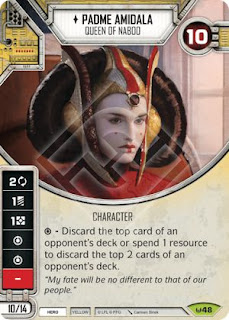 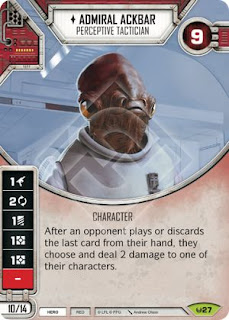 I'm not 100% sold on Ackbar, but I think he's the best choice I had for a red character.  His die is pretty helpful, but he's not very strong otherwise.  I played a couple of games and realized that a grand total of 19 health can't stand up to even mid tier aggro (pure damage dealing) decks.  I decided to add Rey to the mix.  Rey gives me extra health AND a juicy target for my opponent to beat on.  I won't have any blue character only cards in my deck, so I'll give shields to Padme and Ackbar and hope Rey becomes the target.  She also has a discard facing on one die, so that might help if I get a focus elsewhere and want another discard.  The Jedi robes are relatively cheap, give me shields if I can play it first round and give me two focus facings. 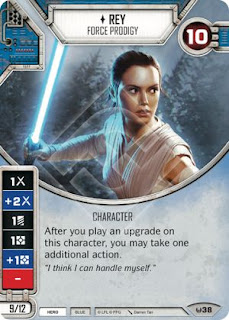 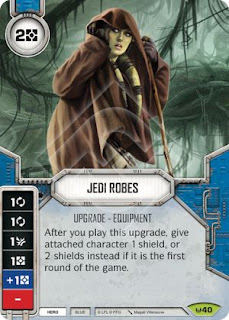 Rey also opens up some nice discard oriented blue cards.  I'm thinking about including the below cards.  Jedi Council is nice in that its a single discard, but also lets me make my opponents hand potentially a little worse.  I overlooked Patience at first, but think it might be a late game changer.  Roll your dice, and then if you don't have good results, just play patience, effectively bowing out of the round but potentially causing 5+ discards.  In a 30 card deck, that's devastating. 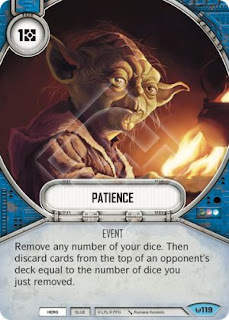 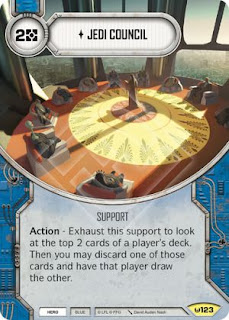 I still need to trade for a couple of other yellow and red cards, but I'm pretty happy with how this deck is shaping up.  I'll post more tomorrow about the other colors I'm including.