I've been playing Warhammer 40k Kill Teams lately using the Heralds of Ruin rules.  It's been a lot of fun.  I've mainly just been using the models I have available and painted.  My experience thus far is that this doesn't make for very effective teams.

I'm seriously considering putting together an Inquisition Kill Team.  The Heralds of Ruin people put out specific lists, so the options vary a bit from the Codex choices.  My thought is to go with the following list... 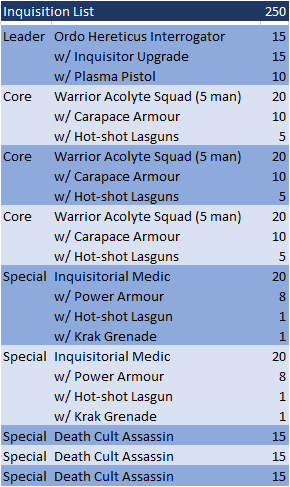 The idea is to have a relatively basic Inquisitor with 20 Warrior Acolytes broken into four 5-man units.  The Warrior Acolytes will be supported by two Medics and three Death Cult Assassins.  My idea was to go Ordo Hereticus and have the Inquisitor "under cover" posing as a group of cultists to infiltrate an existing cult in the underbelly of a hive world.  In that sense, no Inquisitional logos or polished armor is allowed.  Everything needs to be filthy and covered in rags and rebreathers. 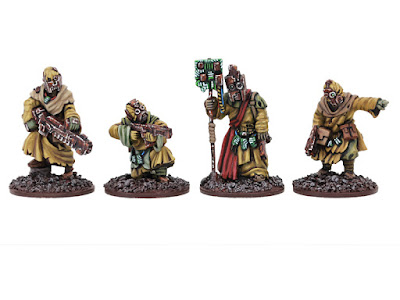 The guy with the staff thing would be the Inquisitor.  He's obviously the cult leader.  He's amazing.  I've seen this sculpt before and totally love it.  Two of the other guys will get light conversion work...  probably a backpack...  to become Medics. 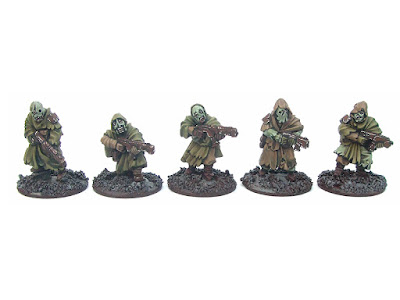 These guys will be the basic troopers.  I know this picture isn't as great, but they totally fit with the command guys.  I'd need four blocks of these. 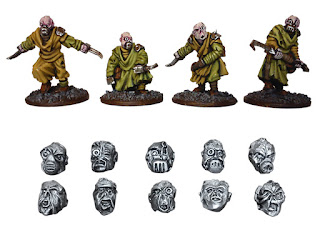 Last up are the melee guys.  Three of these would end up as Death Cult Assassins.  Some of the heads look a little rough, but for an extra couple of bucks, I can get ten extra of the head sprue that has the hooded, masked guys.  I prefer those anyways.

All told, it would cost 60 GBP plus shipping to order directly from Pig Iron.  TheWarStore used to stock them and still have an area in their web store, but it's empty.  I'm trying to find a US distributor.  It would almost certainly be cheaper.  60 GBP is a little rich for my blood right before Christmas.  They do accept PayPal.  Maybe if I sell some crap I don't need, I can just PayPal this stuff and get it for "free".