Fun fact...  Today is my birthday.  I took the day off from work...  and then immediately was told that I had to come in for a 9 hour long planning meeting.  Awesome way to spend your birthday.

In other news, I decided what to do with my Apothecaries.  I've decided I really want them to blend in with the other Marines.  To white, I ordered the following parts from a bits vendor on eBay.  They're both from the Ravenwing Command box.  The  Ravenwing Comand Apothecary has more details in both the power plant and the Narthecium, but no Dark Angels logos at all.  The plan is to put these onto a standard Betrayal at Calth Marine, with a primarily silver paint job.  I'll probably just do a single white should pad to differentiate the Marine as an Apothecary. 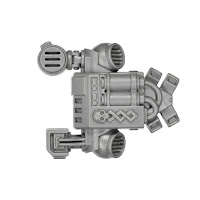 I'm hoping to receive the bits sooner than later.  I'd really like to be able to assemble these guys ASAP.