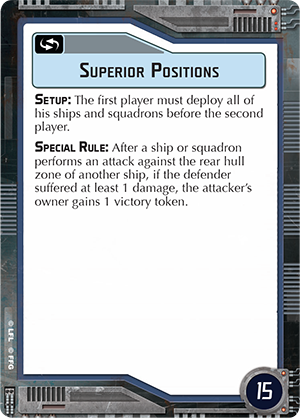 The tokens are nice, but the real advantage here is getting to see your opponent’s entire game plan on the table and set in stone before you put a ship down. I’ll risk this list even when I know a fighter ball can overwhelm me, because I usually exploit their initial deployment enough to make up the points. It’s difficult to describe the exact tactic without a few dozen pictures, but the idea is to put your opponent to a choice (hopefully a choice between two bad options). For example, if your opponent is running the Rebel swirl go the opposite direction and attack from the rear. If your opponent splits this ships between the two sides of the board, consolidate so some of his ships are out of the fight for a few turns. I once did this against an ISD and two Gladiators. The ISD took 5 turns to enter combat against my Ackbar swirl.

There isn’t much your opponent can do to completely mitigate your advantage. If they split their forces, you can consolidate. If they concentrate their forces, you can take the best route of attack. If it’s even numbers, you can play the matchup game. This last point is especially useful if you’re trying to use a combo list (i.e. Overload Pulse and Avenger).

If you’re looking to wrack up the tokens I find there are two good options: Rogues and multiple small units (MSU). The corvettes are generally the favorite, but Demolisher is another solid obvious choice. Generally anything that moves fast and can have two clicks on its last joint will work. I’m a huge fan of the Gups, and with navigate commands, they do well with this objective. Their success is due in part to the element of surprise: no one expects you to aim the speed three whale at their rump.

My favorite list packs in the rogues. This objective rewards both Han Solo and my six YT-2400s. Yup, I’m one of the guy that looked at wave two fighters and went nuts. This objective is a nightmare when you’re trying to cover up from seven attacks a turn. At speed four there isn’t much your opponent can do to stop the 15 point tokens from piling up (my record is 14 in one game).

Commanders are super list dependent, but should be seen as an enhancement to the objective. If you’re running a bunch of bombers, then consider Dodonna. If you need some flexibility, then Tarkin or Garm are solid choices. If you’re adding a specific tactic then Ozzel, Screed or Mothma can help round things out. If you’re going for token, then the only commander I find to be difficult is Ackbar, as the swirl tends to stand back.