Why Advanced Gunnery Is a Fallacy


Even now that gunnery teams supersedes it, most people feel that Advanced Gunnery is an automatic throw away objective. My opponent will never give me this much of an advantage, so I’ll play this effectively blank card and practice my other to missions. Okay, solid logic. That’s how most of us felt in November and December of 2015. By January 2016 the cracks in the edifice were beginning to show. And by February 2016, I’m down right worried if my opponent takes it that his plan is better than mine. 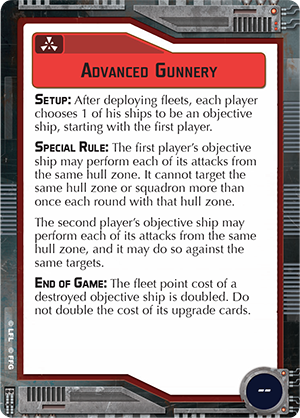 And that’s really what advanced gunnery comes down to: how has and can execute the better plan. Lots of people take this objective, at least in the Philly/South Jersey/DE/Northern Maryland areas. So, everyone has given the objective a lot of thought and has a pretty good idea what do when they play either side.

So, does that mean you shouldn’t make advanced gunnery one of your missions? Probably, unless you have a plan to capitalize on it.

Here are some ways to capitalize on it:


1) Pawn Sacrifice
Taking a Corvette or cheap ship to skew the points advantage offered by advanced gunnery — your ship will most likely run away and stay out of the fight while your opponent now has to sweat bullets that the now 240 point Imperial Class Star Destroyer will cost him the game, because that ship has to survive for him to win

2) Grand Slam Lists
Your list is tailored for neck-punching goodness and giving you a double tap is most likely going to kill ships in a single turn. *cough* Ackbar *cough*

3) Activation Advantage
This lets you choose your moment, so your opponent will suffer more than you for all the extra shooting

This list begs for certain upgrades to come standard with your list: Leading Shots, X17 Turbolasers, and Pulse Overload are all solid stock choices. But Intel Officers, NK-7 Ion Cannons and Heavy Turbolaser Turrets are also good choices that offer a lot of bang for their buck as you get to shoot the ship a second time. Additionally, tailoring for specific effects can make some often overlooked upgrades economical choices through synergies. For example XX9 Turbolasers don’t see a lot of action in Philly, but add Screed or Dodonna to this list and they make a ton sense.

Also, make sure at least one of your ships does NOT have Gunnery Teams or Slaved Turrets. The recent FAQ states that Gunnery Teams and Slaved Turrets override the objective. So you need to be sure you have some wiggle room when you put this in your list.


Darth Vadar / Admiral Ackbar both offer the same advantage: using their abilities to the point of game breaking pain. They only work well on grand slam lists, but who cares? Most ships can’t handle 16 dice, let alone 16 dice with a very reasonable re-roll (I always give Ackbar leading shots). I’ve seen Victories and MC80s melt to punishment this mission and these commanders can dish out.

Screed, while you can only use him once, he offers a safety net for double critical effects in a single activation (one natural and one Screed).

Tarkin is great for a constant re-roll token.

One final note, if you’re taking this list don’t bother with Gunnery Teams. The redundancy should be obvious to most people, but you’d be surprised. If your opponent didn’t take gunnery teams and you did, then you’re really giving them a much bigger advantage than they are giving you.