Only take the objective if you take at least a handful of bombers.

I know I talk a lot in the blog, or at least in this first series of posts, about having a plan to execute, and this time it’s even more important. But your plan for this objective needs to include bombers. The reasoning is as follows: if you play against a Rhymer ball or other bomber list your opponent is going to score a lot of points. If you can’t reciprocate those points, then you’re most likely going to lose the game. And the reason is this: Precision Strike gives points on a per attack basis, with each attack being able to score twice (once for rolling a crit and once for spending a die to flip a card face up). Fighters with multiple anti-ship batteries and bomber (B-Wings, Scurrgs, Firesprays, etc.) can score 30 points a turn per fighter. Three B-Wing can yield five tokens (75 points) in a perfect round of shooting against a ship without shields. Scoff if you want to, but remember an opponent with a lot of bombers can afford to keep your Gup alive to soak up the extra points.

Therefore, even if you have fighters, make sure you feel confident in your ability to win the fighter battle should it become a ball vs. ball game. Without going into the anatomy of Rhymer balls or other bomber balls, you want to make sure you’ve got some escort or other answer to the opponent’s fighters.

I did toy with the idea of using non-bomber fighters with this objective. The idea was to have the fighters deal few cards at the end of the game turn for the ships to flip face up on the next turn. But much like other combos in Armada, it was an unwieldy mess. Plus, I frequently found myself torn between flipping the card face up and doing one more damage to the ship.

Okay, lets talk about the tokens. They’re nice, but not a good reason to take this objective. Precision Strike is a complicate objective that requires well thought out list building and solid tactics on execute to yield a points advantage. It might be the hardest objective in the game to get right. The token is attractive, but not a game changing decision.

Now, lets talk about upgrades. Not shockingly any upgrade that guarantees a face up damage card is great when playing this objective. The two that spring to mind are Assault Proton Torpedoes and Dodonna’s Pride. Yavaris is a clearly good choice if you’re playing Rebels as it can really amp up the damage.

Because my play style is ship first, I rarely worry about making specific fighter recommendations relative to the objective. But this is the objective Luke Skywalker was born to play. While black dice only have 25% chance to crit, Luke as a good chance to setup a damage card for another squadron or ship to flip over later that turn.

Finally it’s time to consider what commander you want to run with this objective. This objective pairs best with Screed. His ability guarantees several tokens a turn. At 15 points a token, well, your opponent is going to have a lot of issues compensating for all the damage, crit effects, and points. 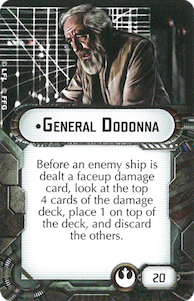 Dodonna fits well with this objective. Though not as powerful as Screed in terms of synergy, stacking a victory token on top of the best possible crit is pretty mean. Just remember that Dodonna’s ability only affects cards dealt, so it won’t trigger when you spend a die to flip a card face up.

Iblis is out, because you’d lose a token on turn one, which takes away 17% of Garm’s benefit. And Tarkin, is still helpful, but you’re one turn closer to a use it or lose it scenario with your tokens.

Ackbar is tough because his lists tend to focus on more expensive ships and don’t leave much room for bomber runs. That said there is a case to be made for overkill. Ackbar tends to generate a lot of extra damage in the late game, and while there is a one per attack limit, scoring an extra 15 points can help push you from a 7-3 margin of victory to an 8-2. So, you can always take all your overkill and spend it turning over damage cards you dealt last turn. It’s a good way to run up the points total.

This might the only objective that makes Darth Vader a serious candidate for commander. He will let you re-roll blue dice without spending any of them, and therefore gives you a lot of safe chances to re-roll for a crit. That said, you’d have find two other objectives Darth would be good at and you’d have to 36 points. Still mediocre, but I have a soft spot for the Sith lord.