The Pittsburgh Regionals from the Perspective of Sixth Place

BiggsIRL did a very good write up of the overall tournament, so this post isn’t about reporting on a loss or even the games exactly (though I did recap below). Instead, I’m just going to talk about the tournament from my point of view and how things went.

First, Mr. Nice Guy Games is an awesome store filled with awesome people. Maybe it’s the years of mental and emotional abuse I’ve suffered playing 40K tournaments, but the Armada community is full of friendly folks. Pittsburgh is no exception. Everyone I played as warm and inviting. This is especially nice, since I’m from Philadelphia and sometimes, our reputation precedes us.

Second, the Pittsburgh meta is the strongest I’ve seen — or read about. I went to this tournament with two friends and met a third on site. We prepped for this event like it was the MCATs. Not just play testing lists, but reading tournament reports from the local and surrounding metas. We discussed what effect of the Steele Open might have as they were both on April 30. We talked through various commanders and how they would play against our lists. I did the best of any of us and came in sixth (the other guys came in 8th and 13th ). To be honest, that includes a few points of luck.

We spent a lot of the tournament staring at our opponent’s board trying to riddle out what they knew and we didn’t. The answer is Rieekan. The Philadelphia meta has developed over the last six or seven months to value killing a ship mid-turn before it activates to win the game. It’s a sound way to play, and honestly, it’s how 40k works. Unfortunately for us, Pittsburgh figured out that Rieekan counters that Ackbar, raider spam, and most other lists built on the kill before activation philosophy.

The result was an eye-opening experience that I wouldn’t trade for anything in the world, including winning that tournament (I’m playing two other regionals and nationals). It’s always the unseen knife that kills you. And we had played around with Rieekan a bit in Philly, but never really grasped what he could do until that day in late April.
To me that’s what regionals are about: learning what exists outside the local bubble. Sometimes that lets you be super dominate and slaughter your opponents. Sometimes it’s the reverse. Either way it helps me feel and understand that I play in a much bigger galaxy than my own backyard.
Third, the tournament software is super buggy. But we all know that from other reports.
Now for the quid pro quo. 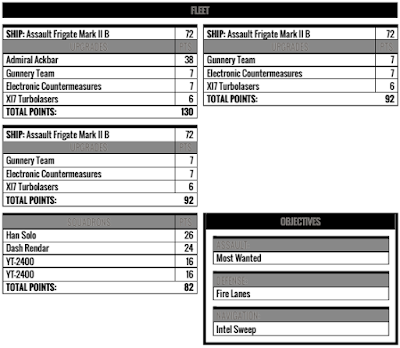 My first game was against one of my friends. There were only 16 players and there were 8 first round byes (7 store champs and one natural). I won 7-3. The second game I lost 2-8. It came down to a bad choice I made at the end of turn sixth, which cost me my whale and Ackbar. Then came game three…

I was talking with a gentleman before that game who said he was dropping because he was low enough in the standings that he wouldn’t be in the prizes. I commented that I only had 9 points and the top table was a battle between two players that had earned 18 apiece, but I wanted to play it out. Hey, I’m here, I paid for it, and I’m learning all sorts of Rieekany goodness. I left to hit the head before the start of the round.

I came back to find him standing across the table from me with no ships and an odd smile on his face.

Me: You decided not to drop. Great! Lets do this.
Him: No, I have to go.
Me: Okay?
Him: Intentional draw?
Me: No. I can’t go back to Philly with an intentional draw on my record. (Plus, I don’t agree with that rule’s existence.)
Him: I have to go, so…
Me: We’d better call the TO over.

Long story short, the player had marked drop on his form after round two. The TO asked him to confirm the drop prior to pairings at which time the player decided not to drop. We double checked the rules. I ended up with a 10-0 victory with a 400 point MOV without even setting up.

I realized this was going to skew the standings. The byes resulted in a close points spread. So, I considered what I would want another player to do, and decided to tell everyone what had happened (including my final score), thereby allowing them to adjust their play style accordingly. It only seemed fair under the odd circumstances that everyone be made aware.

I have no idea why he did what he did, and I don’t care. I feel robbed of a game. I would have finished lower in the standings, and I’m okay with that. I was mathematically eliminated from winning the tournament at the end of round two. So, the next time you’re considering dropping be sure either way when you turn in your round scores. We all came to play. No one wants to sit out.

Until next time—She’s Got Admiral Ackbar Eyes.