This past weekend was an eventful one.  I ended up spending a lot of time with friends and a lot of time sleeping.  I jacked up my shoulder, which kind of put a damper on a couple of things.  On Saturday, I couldn't raise my hand above my head.  Good times.  I'm better now, though.

One thing I did knock out was one of the Tyrant Siege Terminators.  As you might recall, the Cyclone Missile Launcher is from Anvil Industry.  They make top tier stuff.

Here he is with a couple of his friends.  It's kind of hard to see in the photo, what with the silver armor being kind of reflective, but I tried using weathering powder on his feet to make it look like he's been trudging through some dirty terrain.  It was my wife's suggestion.  It was a good one. 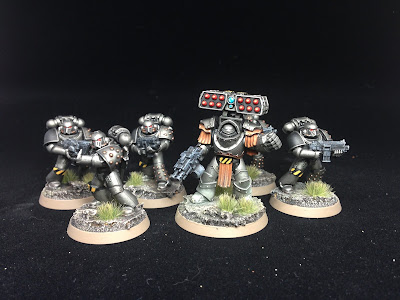 In terms of the paint scheme, here goes.  If I don't write it down, I'll forget all the steps.