FFG finally announced the last pack of the Dunwich Legacy cycle.  It's called Lost in Time and Space.  Sounds like the Investigators are going to be leaving the safety of the well lit path. 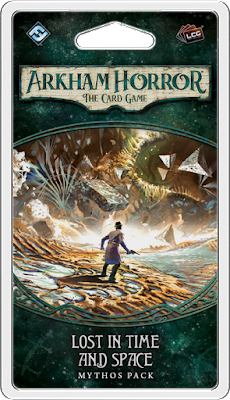 The announcement made reference to 'extra-dimensional' locations.  Sounds pretty exciting.  Thus far, the Investigators have mainly been skulking around museums, train stations and other fairly benign locations.  It's nice to know that this game will branch out and go a little crazy by the end of the campaign.

They did spoil a handful of cards.  Two are powerful, but not particularly exciting, weapons.  There are 4 and 5 experience cards.  I expect them to be powerful.  They don't really add much in the way of new mechanics.  The Chicago Typewriter is pretty cool in that it lets you burn actions to get a more accurate shot.

The other card the spoiled is actually pretty solid.  One phase can frequently make or break a game, so being able to take two Investigator Phases in a row, or skip an Enemy or Mythos Phase is huge. 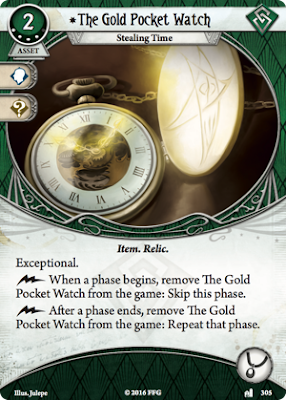 I'm excited to see what else the set has to offer.