I can't remember how much I've written about Arkham Horror TCG.  I feel like I've written a bit about upcoming product, but not about my experience with the game.  I suppose I could look back through my post history, but that seems like a ton of work.  I'd have to click, like...  three links or so.  I don't get paid for that kind of dedication.

There are currently 10 investigators in the game.  They come in five different varieties.  Blue is Guardian, Red is Survivor, etc.  Each Investigator has health and sanity values.  These are like physical and mental health points.  If you die via physical damage, you incur a physical trauma and start the next game with one damage.  Same goes for sanity damage.  There are also four base stats that impact your ability to perform certain types of actions.  Lastly, each card has special rules unique to that Investigator.

Each player has a deck of cards to go with his or her Investigator.  There are usually a set of restrictions on what can be included in the deck.  Roland Banks, above, is restricted mainly to blue (Guardian) and grey (Neutral) cards.  Usually, it's possible to include a limited number of cards from other colors.  The reverse of the Investigator card tells you what you can use.

Decks of cards can be upgraded in between scenarios using experience gained during game play.  Cards have a level and can be purchased at the cost of 1 xp per card level...  so a level 3 card costs 3 xp.  In my experience, you get enough xp to upgrade a small handful of cards after each mission. 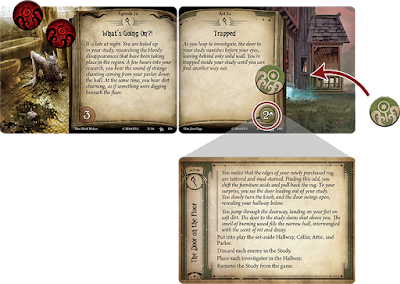 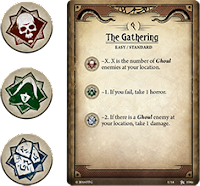 One of the core mechanics in the game is to take a skill test.  Skill tests always have a 'success' or 'target' value and are always versus one of the Investigators four base stats.  To perform a test, you pull a random 'chaos token' out of a blind bag and add the value to your stat.  On easy mode, the chaos token bag is made up of -2, -1, 0 and +1 tokens in addition to a few with icons (shown above).  There might be multiples of each number and tokens might be added as a campaign progresses.  If your modified total is at or above the skill test's target, you pass the test.  Otherwise, you don't.  Game difficulty is changed by modifying the contents of the chaos token bag.

Skill tests cover everything from looking for clues to fighting monsters.  Quite a few of the cards in your deck will have to do with improving your skill tests.  Some are permanent and some are one offs. 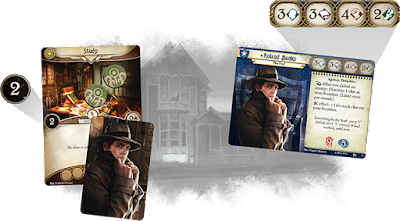 As an example, let's say that Roland is in the Study and wants to take an Investigate action.  He will pull a token from the chaos bag and add the value to his perception stat.  That's the one that looks like a book.  He compares this to the shroud value on the location card (2 above).  If his result is 2 or more, he gets a clue from the location... 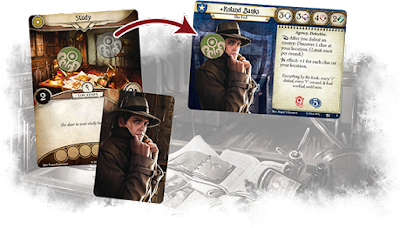 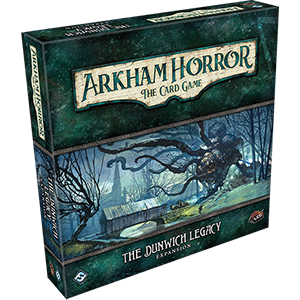 After playing through the first two scenarios, players can pick up scenario pack like the below, which each have one full scenario as well as two player cards for each of the five different Investigator types. 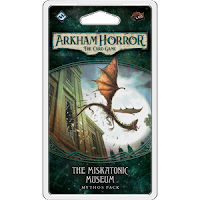 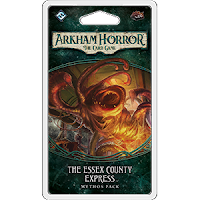 In addition to the linked campaign scenarios, FFG produces standalone scenarios that can be added mid campaign as 'side quests' or played as one night adventures.  If played as a side quest, each player has to pay 3 xp to 'unlock' the scenario.  Generally speaking, you'll earn the 3 xp back, plus or minus a couple, and also earn a useful card to add to your deck. 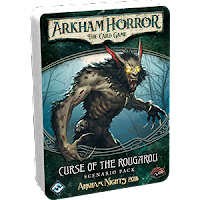 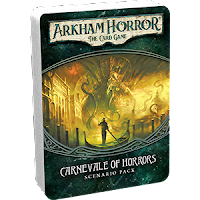 My final verdict is that this game is awesome.  Go out.  Buy it.  You will not be let down.